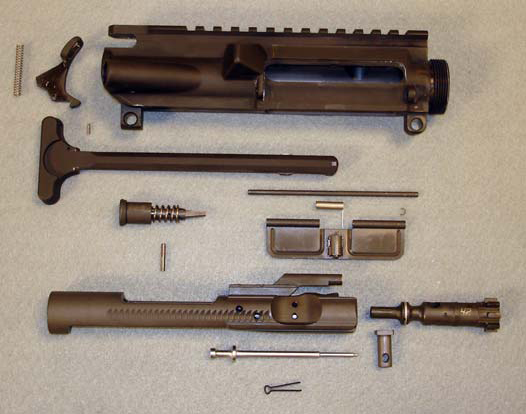 Editors Note: Another contribution from John Hertig for The Prepper Journal.  Part of  series of articles on this subject from the author.

Round 11 of the Prepper Writing Contest is coming THIS WEEK!

In an earlier series of articles we took an in depth look at building your own AR-15.  The purpose was to provide the most legal, efficient and reasonably economical road to building a firearm.  Here we go beyond the basics, to provide some guidance on getting exactly what you want, getting the best results practical, or possibly saving even a bit more money.

My recommendation in that series of articles was to buy a complete assembled upper.  This was because the price for a complete upper tends to be less than for the parts bought separately, and particularly because the assembly is a bit more involved and requires more tools and skills than does the lower.  But if you follow that recommendation, you pretty much have to accept someone else’s idea of what the “perfect” upper is.  Alternatively, if price is a major issue, a kit of all the parts for the upper from one source may be slightly cheaper than the same upper assembled, since paying someone to assemble the upper is unlikely to be “free”.  And then there is that small blemish on the “I built it myself” pride.   If you can find what you want as an assembled upper, and can afford it, and don’t care about complete bragging rights, and you trust who did the assembly, then an assembled upper is the way to go.  Otherwise, assembling your own may be a viable option.  Even if not, the information here will be useful if you ever want to modify your upper. 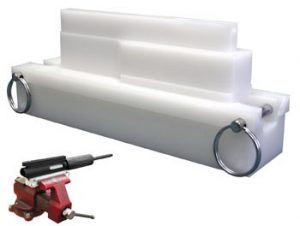 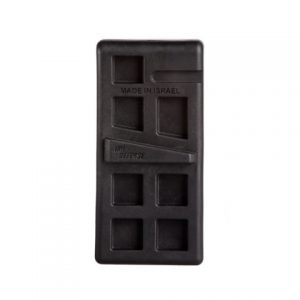 If the upper is “stripped“, then you will probably have to install a dust cover and/or forward assist (together, known as the “Upper Parts Kit”).  Installing the dust cover is fairly straightforward but does require some dexterity.  Installing the forward assist is even easier – if you have the right tools.  Otherwise, it could be a nightmare.  Here is a video.  This video is very good for the dust cover, but this minimal tools approach to the forward assist has a high likelihood of causing you distress.  At the very least, have an upper receiver block to hold the upper so it can’t move on you during the operation.  Here is a video of an easier way.  The “#3″ punches mentioned are 3/32”.  The “insert” is supposedly to “keep the upper receiver from being crushed“, but for this operation you don’t need to tighten the vice much.  If your upper receiver block came with an insert, you can use it; otherwise I wouldn’t worry about it.  For the lower punch, which just holds things in place for you, you can use a roll pin punch or pin punch or drill shank; whatever will fit tightly enough to keep the forward assist in position but can be pushed out by the pin as it is installed.  The Roll Pin Holder is ideal to get the pin started, but if you don’t have one, a pair of needle nose pliers or large tweezers will do to hold the pin until it gets started.  To drive it in, use a roll pin punch to avoid damaging the end.  If you get a prepackaged Upper Parts Kit, you may be lucky with the “C” clip already installed and the forward assist assembled.  If you need to assemble the forward assist yourself, here is a video of how that is done. 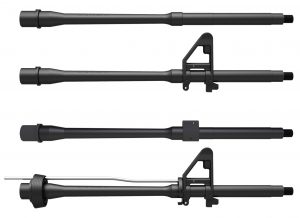 Next is to install the barrel.  For this, you need the barrel, a nut (which one depends on what hand-guard you will be using), an upper receiver block (or a “reaction rod” AKA barrel spline rod) and vise, a bit of grease, a barrel nut wrench, a gas tube locator device if the gas tube goes through the nut, and a torque wrench.  Here is a long-winded but complete video.  The grease he suggests is very inexpensive, but you get a lot which needs to be stored, and the container is not optimal for long term storage.  I got a small can from Amazon which cost twice as much AND contained only a tenth as much as does the big tube, but is enough for dozens of builds, and the container is much smaller and better for long term storage.

Now install the gas tube and gas block.  It is easy to end up a bit off, with significant impact on the reliability of the functioning.  You often must mount the tube into the block first and then install the assembly on the barrel, but I think it is more accurate to figure out where to mount the block first, then remove it and install the tube, then finally install the whole assembly.

There is a hole in the barrel, and a hole in the gas block, and these need to be lined up accurately for the firearm to work, and work correctly.  Furthermore, this alignment, once “perfect“, needs to never move.  Some gas blocks are held in place by set screws, some by clamping around the barrel and some by pins through notches in the barrel.  I’ve not tried any clamp-on or pinned gas blocks, but the set screw ones are not completely secure without “help”.  Set screws can loosen or shift; Loc-Tite and “dimpling” the barrel can help prevent these problems. 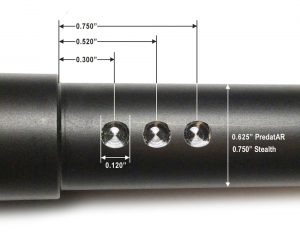 The method of dimpling shown in the previous video just has too much chance of error for me.  I prefer another way, which is the most accurate way of locating AND dimpling the gas block.  This is using a gas block alignment and dimpling jig such as the one from BRD Engineering.  The idea is to perfectly index dimples to the gas hole, so the gas block is forced into the correct orientation and to stay there.  The BRDE gadget is too rich for my blood, though, and is only usable for some brands and models of gas blocks.  The combination of economy, versatility and accuracy which I went with was the SLR Gas Block Dimpling Jig.  Here’s how to use it.  The best drill size to use with this jig seems to be 5/32″; personally, after I get a good dimple I widen it a bit with a 15/64″ drill since my gas block screws seem to be a bit bigger than “normal”, but this is a matter of personal preference.  Also, if the barrel is not stainless steel, I use a bit of cold blue to offer the dimples some rust protection.

In the earlier video about the BRD Engineering alignment and dimpling jig, the BRDE “pinning” jig was also shown, which can provide the ultimate solidification of the gas block mount, but I did not think it was necessary for my build.  If your gas block is exposed beyond the handguard where it could get knocked or has a sight sticking up to get caught on something, pinning the gas block would be wise. 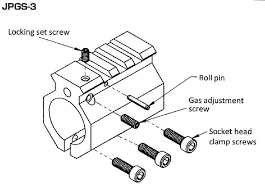 This will likely be a real pain due to the small size of the pin, the significant amount of resistance it offers and the non-linear shape of the gas block.  The hole and pin are oddly sized (0.078″); a size which is not normally included in punch sets, although 5/64″ is real close.  Much as I distrust starter (tapered) punches, in this case one is suggested, as a 5/64″ straight punch often just collapses into an “S” shape under the stress.  If you don’t have a starter punch, a regular bigger punch is strong enough to get the pin most of the way in, but getting it below the surface will be a challenge without that starter punch.  As for how to hold the gas block while driving in the pin, the way that worked for me was to open a vice far enough that the top and bottom ends of the gas block were supported, with the “fat” part in between the jaws.  I laid a strip of thick leather across the jaws to protect the finish of the gas block.  An even better way I found on my second try was to fasten the block to the barrel, and then hold the barrel in the vice (with a barrel spline rod) while installing the pin.   This time the pin went in relatively easily; perhaps because I used the pin which came with the gas block rather than the one which came with the gas tube.

With the BCG removed, put on the front hand guard plate (if you need one), then slide the gas block onto the barrel so the gas tube slides into the hole in the barrel nut, if present, and into the upper receiver.  As you tighten the set screws, wiggle the gas block to ensure the set screws are centered in the dimples.  Once the gas block is rigid, block the chamber and blow into the barrel to make sure that there is some resistance, but air does move through the gas system; then install the BCG.  With a dummy round or snap cap in the chamber, close the bolt to ensure the gas tube is aligned correctly and not too far into the receiver, then blow into the barrel to verify there is noticeably more resistance to the air than before.  If all is good, “permanently” mount the gas block by removing one set screw, applying Loc-Tite, replacing it and tightening it to spec.  Repeat for the second set screw.

We are nearly done.  It is time to install the handguard.  The details will vary from handguard to handguard.  I prefer “free-float” handguards, and they tend to mount similarly to each other.  In most cases, their mounting device will have been installed as part of the barrel install, with any tension ring screwed fully against the receiver to be out of the way.  All that most require is either to slide the handguard over the barrel nut and insert several screws to hold it in place, or screw it over the barrel nut until the rail is in line with the one on the top of the upper receiver and screw in any locking bolt, then screw any tension ring forward against the handguard.  You may need one or more shims between the nut and the upper to ensure the handguard is correctly oriented.  My favorite system is one I got from Delta Team Tactical which not only has a barrel nut low enough that the gas tube goes right over it, but the guard uses screwed wedges, so it is super easy to get the top rail in line with the rail on the upper receiver and no shims are ever necessary. 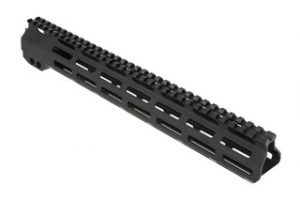 The last step is to install any muzzle device.  In order to allow you to properly orient the device, put a “crush washer” on and then screw on the device finger tight.  Using a wrench (if there are flats) or a long rod though the ports, tighten until any top ports are perpendicular, and the ports on the sides are horizontal.  Generally you want to tighten between 90 and 180 degrees from finger tight; there are shim kits available if you can’t tighten the device enough to have it correctly oriented.

Don’t forget to check your head space as described in the Assembly part of the general build series.