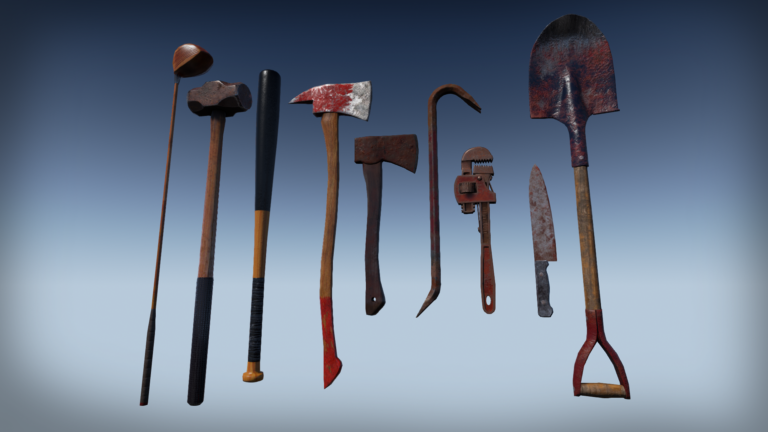 Editors Note: Another guest contribution from valknut79 to The Prepper Journal.  The opinions expressed herein are his. As always, if you have information for Preppers that you would like to share and possibly receive a $25 cash award, as well as being entered into the Prepper Writing Contest AND have a chance to win one of three Amazon Gift Cards  with the top prize being a $300 card to purchase your own prepping supplies, then enter today!

Almost all preppers love their guns.  It has been my experience, though, that most non-prepper family members do not love guns quite so well perhaps, as some of their counterparts,  Let’s face it – without proper education, care, storage and maintenance, guns are absolutely one of the most dangerous things you can bring into your home, especially if you have children.

That said, guns are one of the most useful items you can have.  They are an absolute essential piece of home defense, self-defense, and they can be used to hunt game for food as well.  Outside of a knife or a cell phone, very few items that you can prepare with have dual purposes that can equal a gun.

If firearms are causing a fight in your family, if you have a legal record, or if you live in an area that disallows firearms, then it’s time to start thinking of an alternative.  There are plenty of alternatives out there, and while none of them are quite so effective as a rifle or a pistol, they can work in a pinch. 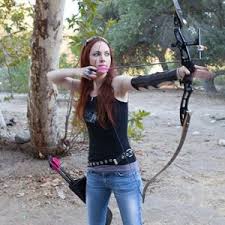 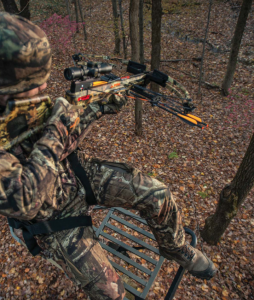 The best alternative to a true firearm is surely a bow or a crossbow.  The former is quieter, cheaper, faster to reload, easier to maintain, and more versatile, but requires significantly more practice, while the latter is much easier to use, and much more accessible for those with poor arm strength.

If, for whatever reason, you are unwilling or unable to own a gun, then owning a bow is something that should top your list.  While either weapon requires practice, it shouldn’t be very long before you are able to at least develop a minimum level of arm strength, aim and tactical knowledge for using these items. Your local park district, nature preserve or school may even offer courses for all age ranges as well as any archery range in your area. 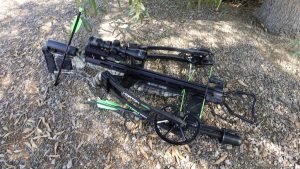 As far as uses go, a bow is quite similar to a firearm.  You could conceivably use it for defense, although you’d certainly look a little strange doing so, and bow hunting is a very popular sport among hunting enthusiasts.  The major disadvantages to bows are obvious – they are less portable than handguns, and less powerful than any gun, so you need to be accurate in your shooting to cause damage to larger game while hunting.  That said, they are significantly quieter than guns, and you can reuse the ammunition quite easily or make new arrows from materials in the forest.

A simple recurve or compound bow set with arrows and a target will run you about $300 for an adequate starter set, and is often enough to get you started without worrying about accessories or professional-level equipment. The cross-bow pictured above will set you back north of $1,400. 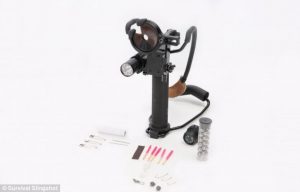 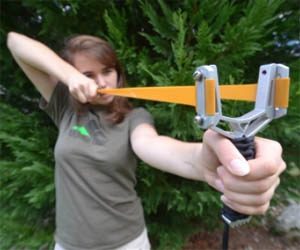 There are many slingshot truthers out there who believe strongly in this weapon.  In my opinion, while a slingshot is another alternative to guns or bows, it is a far distant third or even fourth-place option among ranged weapons, almost to the point of irrelevance.   It is far less powerful, using small metal balls to do damage, but has minimal ability to do damage, a short range, and wide variations in accuracy.  It is far cheaper than other options, running less than $50 for most models, including ammunition.

For self-defense purposes, a slingshot is nearly useless, as it won’t stop attackers without a perfectly targeted strike, and it’s not useful for hunting most animals larger than rabbits, but in a pinch, I’d rather have a slingshot than my bare hands. 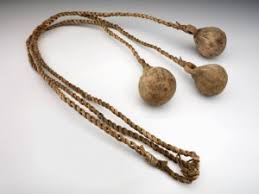 Yes, seriously, bolas are a ancient South American weapon that consist of a par of small weights connected by a length of strong cord.  By whipping the bolas at a high speed, then throwing the bolas at a targets’ legs, you can trip them up and immobilize the target for long enough to hopefully approach and strike before they can free themselves.  Heavier weights on the ends of the ropes will do some damage as well, but a bolas should be looked at largely as a capture tool first and foremost.  Bolas are not a particularly effective weapon for all animals, as it may be difficult to fully ensare a nimble four-legged creature, but for hunting birds or smaller quarry, they can be quite useful.  The native people who use this weapon are often able to take down birds in flight, or use these as a surprise capture tool for birds on the ground.  This is another weapon whose effectiveness will depend largely on the amount of effort you put into praciticing with the device, but it could be a uesful alternative.  Unlike an effective gun, bow or slingshot, a bolas is a weapon you could create with materials you already own, so it’s possible to start practicing with a homemade weapon quite quickly. 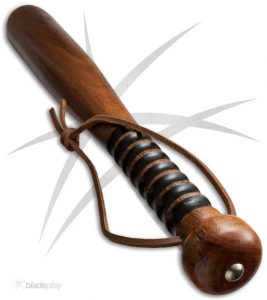 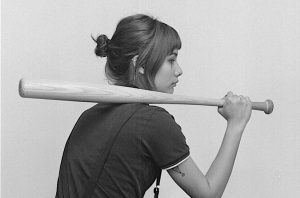 A club is a good self-defense weapon for close-quarters combat.  You could use a baseball bat you purchase at a garage sale, or a tactical option like a telescoping weighted club, and each would be at least somewhat effective for keeping attackers at bay.  If you happen to be a larger person, a club also offers a strong intimidation factor, but it is very ineffective if thrown or used as a ranged weapon, where it would have no practicality in a fight.  It’s certainly a low-level option.  Of course, unless used in combination with a bolas or similar trapping/ensnaring weapon, a club is not a useful hunting weapon. 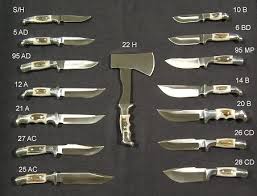 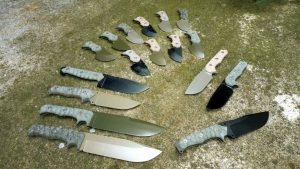 I’m a person who believes that you should carry a knife with you at all times, so it does fit with being a EDC device that you could use for self-defense.  Knives share many similar features with clubs, as close-quarters self-defense tools that are certainly more effective than hand-to-hand combat.

I included knives specifically because I consistently see advertisements for tactical throwing knives that I think need to be addressed.  The idea behind throwing knives as a weapon baffles me.  Anyone who has experience using these items knows that they are iffy at best.  Hitting a moving target with a knife that is flipping end-over-end and having that knife not only strike, but also damage, is nearly impossible.  It’s perhaps the coolest option to show off as a parlor trick, but it cannot be used with any effectiveness outside of sheer blind luck as a hunting or self-defense tool.  Don’t be a movie star, get a real weapon, or at the very least, when you’re in a fight, don’t throw your knife at your attacker.

I have a replica Spetsnaz shovel in my truck for emergency use. This would also make a great impromptu weapon.

Nice post. I don’t feel the slingshot is well represented here though. You’ve included a picture of a slingshot modified to fire arrows but not mentioned it in your post. A slingshot modified in this way can be powerful, accurate and ultimately quite deadly. With the added benefit of being able to make your own ammunition as you mentioned for the bow.
And as for bladed weapons, I agree with you about throwing knives but how about a machete or katana as an alternative apocalypse weapon?

A good, reliable katana is horrendously expensive, and mere possession can get you in trouble. I opt for a machete, an American made machete from company called Ontario. (Ontario Knife Company 6144 Military Machete – about $25 on amazon.com) These machetes are tough and very well made. Lost one in the woods and found it a year later no worse for the ordeal – no rust on the blade; no rust on handle rivets.

Cold Steel has some which are pricey, but not “horrendously expensive”.

You’ve omitted two of the handiest, most inconspicuous, and most justifiable objects: canes and sticks. A hooked cane, especially a pointy one, can be a formidable weapon, and you can’t usually legally be parted from it, thanks to the ADA. A 6′ bo, or shorter jo, is simply a stick, but in the right hands, it can keep people at a distance, and neutralize knives and clubs.

I am surprised you did not mention a cane. Not one of those flimsy aluminum type, but one made of hardwood, like hickory or oak. Been everywhere with my cane, including courthouse and police offices – never any issues, and remember time went to courthouse it was raining and guards where taking peoples’ umbrellas away, but breezed thru check in with my cane.

As to your comment on the slingshot being useless is for self defense ,is pure BS! I have first hand knowledge that a sling shot can take a person down fairly easy. I use to live in Spain(off base, Dad was in the Navy) for 6 months long ago before getting to move “on base” as housing opened up. My point is my older brother and I were walking towards the local bread shop when he was hit with a projectile from a slingshot some 60 yards away…two local sh*t s thought we looked like good targets and let loose… Read more »

Guns are best for direct confrontations which should be avoided in a survival situation. You can fight like a tiger or hide like a rabbit. Tigers are almost extinct but there is no shortage of rabbits. A weapon is a thing designed or used for inflicting bodily harm or physical damage. The weapons you and the other commenters list are those used by the tigers. The rabbits use traps. Traps can be used to obtain food and to stop predators including the human kind. They work for you while you are doing other things. They can cost little or nothing… Read more »

That’s a good point, but incomplete. If the “hiding” is unsuccessful, the rabbit has no chance of surviving, while the tiger has some chance. Sometimes confrontation can’t be avoided, and in those cases, teeth and claws are essential.