This subject of hurricane preparedness is a recurring thread of The Prepper Journal and here are three good articles articles on it from our archives:

Weather prediction remains one of the most challenging of sciences. While one can drone on ad nauseam about things from the “European Model” vs the “American Model”, to spatial scales, Chaos theory and the atmospheric sciences of meteorology, climatology, atmospheric physics, and atmospheric chemistry, events in the Eastern Caribbean have already eclipsed that and Florida is clearly in its path, and the projected turn north could impact most of the Eastern Seaboard of the United States. The cover photo for this post is from Thursday, September 9th and things can change, but not that much. Irma is wider than the Florida peninsula. One must take Irma for what she is, a potentially catastrophic event. Eight (8) dead and twenty-five (25) hospitalized were reported this morning on St. Martin, and that was just the initial report. These numbers will grow. 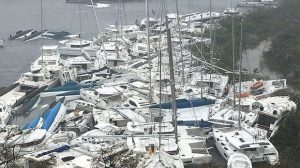 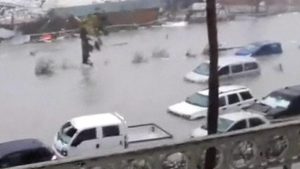 If you have relatives or friends anywhere in Florida call them! And when you get the “I am ready” or “I’ll be fine” press them for details. How will you be fine? What supplies do you have? Do you have an escape plan because few things “move as planned” in winds over 125 mph and things that were never intended to move do. A shattered window pane creates a lot of shrapnel in high wind. Now after making landfall the winds will diminish, but will be at Tropical Storm levels (sustained winds up to 73 mph) all through Saturday and deep into Sunday and Florida, like South Texas, has a high water table and no real drainage system. Text or tweet or email them the articles referenced above.

Every prepper should monitor events closely, learn from the experiences of others, look for reliable news sources (and let me know when you find them) and from every terrible situation they see consider building a “reverse water-fall model” plan of how they should prepare for facing the same or a similar situation. While there are no hurricanes in Idaho a strong blizzard and howling Chinook winds all along the Front Range of the Rockies can be almost as dangerous. 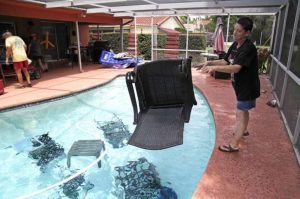 This picture is from Florida today. The resident is limiting objects that can become missiles in a strong wind. Don’t know that I would do this in particular but I am 2,000 miles away and safe from what he and his family are facing. I can see his logic as they will be lost anyway.

I worked and lived in the Cocoa Beach Florida area for several years. While there I rented a house on the beach in Indialantic, Florida for the first 3 months while I got to know the area. It was on a spit of land that was 8′ above sea level; I had an “A1A” address. No hurricanes while I was there. When I stood on the side yard, facing the Atlantic 30 yards away, I could turn around and see the sailboats on the Banana River (Florida’s Inter-coastal Waterway) less than a quarter mile away with one causeway to the mainland 2 miles to the south and one 5 miles to the north. THAT brings home an understanding of vulnerable. I have friends in central Florida smarter than me so they will be okay, but I have a relative in the Clearwater area of Tampa Bay who is well into her 80’s. Getting voicemail yesterday was NOT reassuring. Hearing from her son-in-law just a few minutes ago that they flew her out yesterday to stay with them in California was….

Those who prep in Florida and along the Eastern Seaboard will know in a few days if it was enough, we pray it was for all.

Well: my eldest sister recently retired just north of Tampa. She’s quite fit, (still comes north to collect her dear every season), but is most definitely not of the prepper persuasion. I did what I could, using amazon, to get her a life-straw, a Survivor Filter PRO water filter, a cheapo Coleman butane stove, and a 90 day supply of freeze dried food. It all arrived in time, and she has a spot with friends to hole up 40 miles inland. They “should” be ok. Maybe. As an old ex-coastie I have nothing but respect for mother nature – but… Read more »

Sorry, Disque did not pass inspection. It brought back all those tabloid, carnival side-show ads we so never want to see again. We continue to look for other comment options. Do note that on the site you can now give a “thumbs up” or a “thumbs down” to posts.

Hope your sister is good. I would agree with your position that with foresight, one can handle things…other than earthquakes. Darn things still just pop up without any warning.

Palm Beacher here. Yeah, we had some serious wind and a LOT of damage from down trees. Power, as you can imagine, was out. What really got my attention was the lead up to the storm. A week out, I looked around and decided I was low on water so, I went to Costco. I purchased 10 cases on a Friday night. My wife went back Saturday afternoon to grab a pizza and she described it as a madhouse. Tempers were up and water was gone along with bread. Both my vehicles had a full tank of gas and my… Read more »