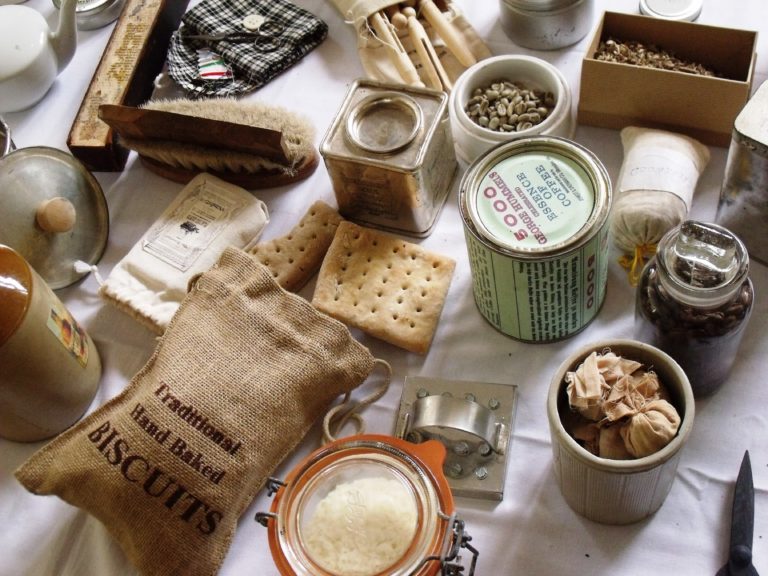 One of the challenges that regularly comes up when we talk about bug-outs is food for our bug out packs, and even food to stash in caches along the way. Food preservation can be a complicated issue, comparing water needs, calories and nutrients, camping meals or supermarket granola bars, and even if we actually need trail food for a journey of 3-5 days.

Then it expands past a bug-out or initial evac kit, to ways to make or stock foods that can be used for overnight and three-day trips after a disaster has struck. In some cases that proposed trip is following a 3-6-12-18 month shelter-in-place scenario, waiting for a die-off or for calmer times. In other cases, it’s looking at the fact that humanity has always made trips – to the coast, to hunting grounds, to and from winter and summer camps, away from danger, for fishing, for trading, even to visit family.

Happily, those journeys of the past, in peacetime and in war, can help us solve our travel food challenges. In some cases, they’re also methods we can use to just preserve foods and let us preserve the convenience of dropping something in water to create a meal.

Pemmican is one of those well-known long-storage travel foods. The proteins and fats, and the precious calories from those fats, were hugely important to people who were in some ways very nomadic, and to those who might be largely sedentary, but whose opportunities for fats and meats came in very short bursts through the year.

By first separating very lean meats from fats, then processing those into the separate entities of dry beef and suet, they can be recombined into a travel food that will store well for months in just paper, a full year if kept cool. That food can then be eaten as-is, or used to make a soup.

Many, many modern pemmican recipes include “wet” dry fruits like raisins, craisins and currants  – that’s going to significantly shorten the shelf life. A lot of the recipes I see floating around also include a lot of dried fruit, even though some of it is the dry-dry “leather” or “plastic” level of fruits. In some, there’s almost equal ratio of fruit to meat or fats.

That’s not actually how I learned to make it. What I learned is a bit more like this.

My only ties to natives are from the upper East Coast and the Deep South Cherokees who were moved west. So maybe there are tribes out there that really do use as much fruit as meat, and it’s distinctly possible that something got lost in translation in Oklahoma and Wyoming or as tribes merged and disappeared.

I learned to make it at a ratio of about 3-4 parts dried meat, 1-2 parts suet or rendered fat, and at most 0.5-1 part dried vegetation – dried to the point when they, too, can be pounded into a powder.

Undoubtedly, the inclusion of a little bearberry or strawberry leaves would have boosted the Vitamin C, which would have been a huge aid to staying healthy in deep cold and deep snows, and while on the move. There’s also probably to-taste twitches that were used by individuals and groups to improve the palatability.

However, once mixed into pemmican, the application of dried fruits, leaves, and roots would have become limited: to food, and to a specific type of food. It no longer would have been possible to doctor them into the drinks, sweets, and herbal remedies that natives regularly used.

So I’m inclined to think that probably the truth from history lies somewhere in the middle (where it usually does), if not leaning just a little towards the “less fruit” side of the house. Some tribes and individuals probably used fruits or a higher ratio of fruit. Some tribes and individuals probably used a minimum of fruit or none at all, packing more of the preserved harvest of spring and summer separately.

Natives wouldn’t be the last to separate their meat and vegetables for long trips and long storage, if so.

Instant Soup in the Old Days

Also called pocket soup, portable soup was made back in the days of the colonists and explorers of old. It was the equivalent of the broth base we can get in cubes and powders today – fast and easy, and with the potential to be not only flavorful, but to boost nutrients the way a bone broth can.

The descriptions given for pocket or portable soup tends to vary from a veggie-based medley to a meat version, such as the one demonstrated by James Townsend.

Lewis and Clark’s expedition wasn’t overly fond of theirs, which to me sounds similar to desiccated vegetables, but during the American Revolution, others took a more kindly view.

Either recipe gives us a way to produce our own instant soups and broths for convenience at home, and have something hearty in our pockets to dissolve into a warming drink or meal, now and in a potential future where supply chains are disrupted. 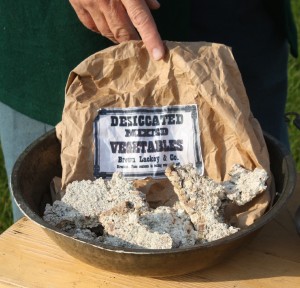 Mmm, sounds yummy, right? We’re not just talking dehydrated/dried veggies here. Desiccated vegetables are a combination of starchy veg and leafy root veggies, either minced and mixed up or layered, that are pressed under high pressure to remove moisture.

Most of the references to its use are from the Civil War here in the U.S. , with citation back to the Crimean War about fifty years earlier. It was highly recommended by the author of “Prairie Traveler” in the 1940s. There are sometimes mentions of it or similar-sounding ship’s food in naval journals from the same general pre-Antebellum period, where the cakes or planks of desiccated vegetables served the same purpose – providing much-needed vegetables to prevent scurvy in forces that were largely eating hardtack or similar foods for long periods of time.

Some recipes list the inclusion of beans or peas, most likely lentils and the starchier peas once grown far more widely. In all likelihood, these were collected green or were pre-soaked or cooked to soften, as opposed to pressed in as hard and dry legumes. It’s possible, though, that they were pre-ground separately.

The mash that resulted was indented or separated into disks before drying, to allow for apportioning either on an individual basis, or by some accounts, into servings for four or five or eight souls. It wasn’t always a preferred food, but it definitely did its job of keeping folks healthier.

We might not go for a monster press to create a handful of cakes for our backpacks or caches, but we can apply some of the ease of a full-meal drop-in if we want, cooking and then dehydrating molds of mixed veggies made using our ice-cube trays.

Some of us already dehydrate mini black bean patties and cooked slices of sweet potato to make serving-sized portions. There’s also a common backpacking trick of dehydrating everything http://www.backpackingchef.com/dehydrating-food.html from fat-free refried beans to spaghetti sauce, applesauce to mashed potatoes, turning it into thin, flexible leathers or hard chips.

Spin it through a blender (with some water if necessary) and spread it thin on waxed paper or butcher’s paper, and you can make leather or chips or thin cakes out of darn near anything. They typically don’t store as long as those 1800’s lumps, though. For many, we’re looking at a handful of months, especially if we aren’t super careful about the inclusion of fats.

There are commercial alternatives, if we’re not interested in making our own.

I ran into Erbswurst while deployed in a multi-national force. They’re compact rolls of five or six disks that dissolve into a pretty tasty and surprisingly textured lentil soup (never add as much water as a soup manufacturer calls for). It does better if you bash it a couple of times to increase surface area, or you can stick it in some water and over a fire, and usually about the same time it starts simmering, it’s started to dissolve.

It’s tougher to find in the U.S. but as the internet shrinks our world, we can pay the shipping for it, or, we can look at similar soup options.

It might not be quite as compact, but we can absolutely portion out things like Bear Creek’s split pea soup when we’re ready to roll or from the get-go. Dr. McDougall has some of those instant cups and packets of split pea and barley that we can store for a good while or repackage for longer shelf life.

So, why am I name dropping those specifically, and sticking to split pea and lentil soups?

Because they have no dairy or meats in them to go rancid early in storage or due to temperature fluctuations. Lentils aren’t calorie powerhouses, but compare a lentil or pea soup to the same serving size of non-dairy instant veggie-based soups. You’ll find that there’s a pretty significant difference there. There’s a whole lot more calorie – and nutrients – than ramen, and it’s in a far more compact form than noodles. They cook faster than the just-add-water offerings that have beans and lentils in them, and even rice in a lot of cases. Those particular options are also satisfying; textured, as opposed to others that are just broth or some of the other pureed and creamed soups on the market.

We can absolutely make our own dry mixes, and we have ways of making especially flaked beans cook faster, or we can prepare something, blitz it in the blender, and dehydrate it in cubes or patties. If we’re going to buy, though, we might as well make sure we’re buying something that checks as many blocks as possible.

Calories, protein, vitamins, fiber, and lasting satiety from food is something I tend to consider, whether I’m sticking it in a backpack for a fun weekend, packing it away so there’s something available on a trail later, or sticking it in my pantries to make fast and easy meals, now or later. 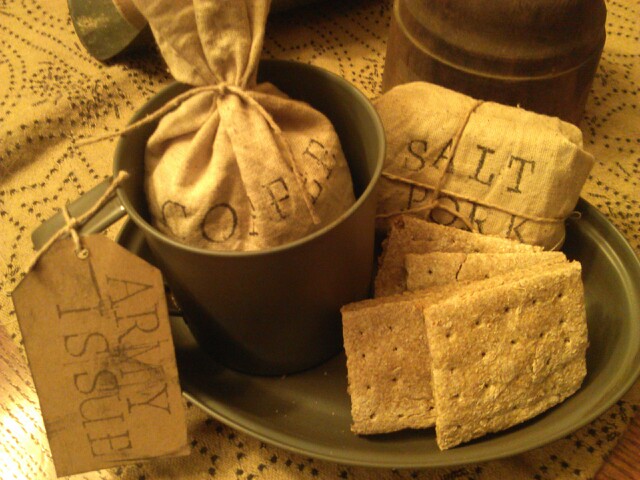 Whoa, whoa, whoa, cowboy; you can’t sum up yet, you missed hardtack. – I skipped hardtack. I gave my opinion about hardtack in an article about bread options for disaster cooking. I don’t really consider fully dried hardtack much of a trail food (although we could carry peanut butter jars to soak it in daily).

There are a lot of reasons we might hit the trail and live out of a bag or off caches in the coming years. Pleasure packing, exploration, intelligence gathering, evacuations, hunting trips, relocation, travel for family reunions – they were done in all of the preceding centuries of recorded history, and they’ll continue to be done for the foreseeable future, no matter what it’s course. Happily, history provides a number of to keep us well-fed during our travels, things we can make at home now or later, and in some cases, readily available commercial options for the less DIY crowd.

In some cases, foods that were traditionally for the trail can also just give us a faster, easier meals – as we’re accustomed to – compared to preparing everything from scratch.

Historic trail foods also have another major benefit: They largely use heat at some point, but otherwise, there are few or no preservatives, and there is no need for fresh canning jar lids. That means if we’re running short of salt, sugar, vinegar, or pectin, or a pressure canner goes down, we still have viable means to get our foods from one harvest season to the next, just as some native tribes and northern explorers once did.

I’m working on a presentation of my research into food in the American Civil War (the topic of my dissertation), and I LOVE this photos. If I cite them and give attribution to your photographer, may I use one of them in my presentation?