Editor’s Note: This post is another entry in the Prepper Writing Contest from Diesel Jester. If you have information for Preppers that you would like to share and possibly win a $300 Amazon Gift Card to purchase your own prepping supplies, enter today.

If you’d asked me 16 years ago if I’d be ready for when the SHTF, I would’ve answered yes without any kind of hesitation. After all, I was single, I was a Ground Team Leader in the Air Force Auxiliary unit Civil Air Patrol, I had worked as an Armed Security Agent, was working in the airlines, and had taken a multitude of camping, firearms, first aid, and survival courses. In the chaos of 9/11 I’d been told that I’d handled myself admirably and with a cool and level head by my co-workers and supervisors. I felt prepared.

Then I met my wife-to-be, moved across the country, and settled into suburban life.

As the years passed my emergency gear went by the wayside, my skills waned a bit, and I had to sell my sidearm at one point in order to afford to move to where jobs were available at due to recession. I didn’t think too much about getting back into emergency preparedness because I had work to do, education to finish, and the everyday chores of life to deal with. It wasn’t until the last couple of years ago when my wife and I became parents of two lovely children that we adopted. Once the process was over, my wife said words that I’d never thought that I’d hear from her:

“I want to prepare for the worst.”

At first you could’ve knocked me over with a feather as I never thought she’d want to become a pepper. Then I wanted to shout my elation at the green light to do something that I’ve been wanting to do again for so long. Heck, I got the go-ahead to buy guns again (Hello AR-7 and Ruger 22/45!). As I started delving back into the world of prepping by looking at articles, making lists, buying supplies, I had to stop for a moment because there was something that I hadn’t counted on having back in my Civil Air Patrol days. There was now a new factor to the equation: Prepping with Kids.

My Children are 9 and 2. I’ve found that I had to modify my lists to suit their needs and capabilities along with my own (especially after seeing a tear-jerking video on Facebook last year about a family bugging out over the course of a year between the daughter’s birthdays). This is what I came up with and your own mileage may vary on how your own situation might be similar or different from my own. 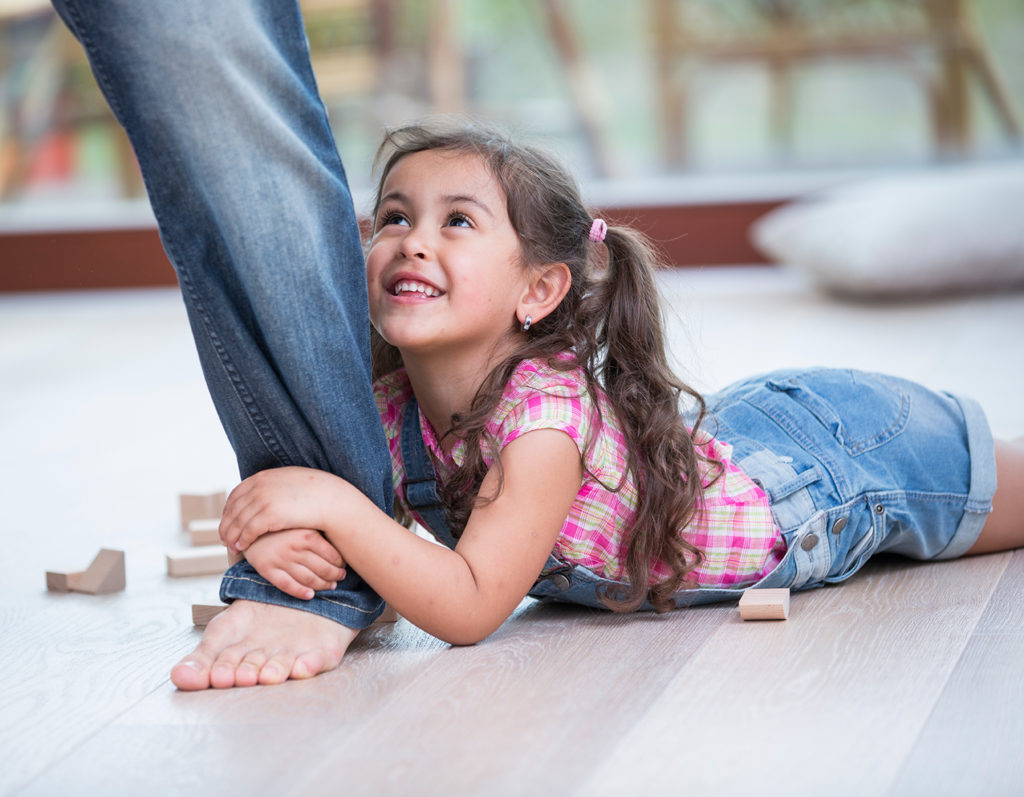 Having kids is certainly an adjustment – both to your every day life and your prepping plans.

What is your disaster plan?

This was the big question for us. What was our plan for when the SHTF happens? Were we going to bug out or bug in? As we live in Alaska now, I realize that we have an abundance of resources around us, a decent community that we live in, and we’re pretty isolated. So bugging out will probably only happen in the event that our town is evacuated for whatever reason. So getting BOBs was high on the list and I started getting the 5-Day Packs available at our local stores. Ultimately it’s going to be a bug-in scenario as all of our resources are where we live along with people that we know and can trust.

But what about your children?

While I love my kids, they are going to be a liability that I’ll need to consider in an emergency situation. Thankfully my 9-year-old has a level head and knows how to decently handle themselves when things get bad. They love the outdoors, can carry a basic BOB on their shoulders, and likes helping mom and dad around the house. I have started taking them to the local gun range to teach safety and shooting with my new .22 rifle and handgun that I mentioned above. I’d chosen those as they’d be easy for my kids to learn on, they’re lightweight and easily concealable if we need to go on a long walk, the ammo is interchangeable between the two of them, and they’ll be effective for hunting small game in the area. My 2-year-old, however, is a big concern as they’re still in diapers. My toddler can walk for maybe a mile and has lots of energy but right now a bug out bag weighs as much as they do! Their needs will need to be met in a time-frame that could last from a week to a year or more. Some of the major things of concern are:

One would think “Costco!” at once for the diaper solution but you also have to realize that your kids will be growing. If the SHTF tomorrow, and you just recently bought in bulk, then great! But if it happens a month from now, a year from now, or two years from now, those diapers that you squirreled away might not fit, especially if you have a growing newborn to consider. So while we’re doing potty training with my toddler, I am being mindful of reusable diaper and wipe solutions and taking into consideration shelf stable milk that I’ll be able to store in the meantime. With reusable diapers and wipes also comes the problem of clean clothes so another thing that I’m in the process of looking at is how we’re going to be doing our laundry if the power goes out and stays out (I’m looking real fondly at my kids’ bike chains now and how I can attach it to a washer cylinder).

Bugging Out with a Toddler 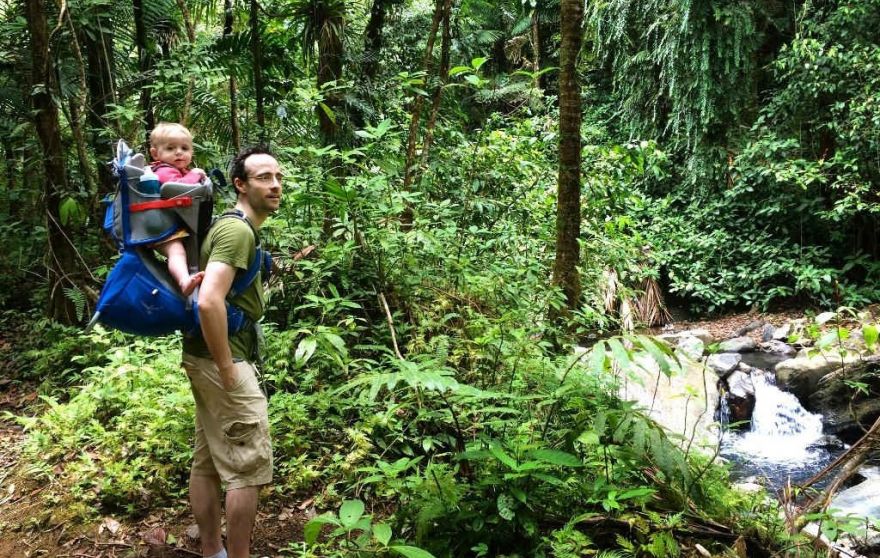 They will never make the walk by themselves so make sure you have a way to transport your younger children and take that extra time/weight into consideration.

There’s only two ways out of our town: Boat and Airplane. Three if you count trekking it across wilderness to the next nearest town but I live in a State where everything wants to kill you the moment you walk out your front door in the middle of civilization (yes, I have had black bears on my front doorstep before with nothing but a pane of glass between us). So walking out of here is not really an option unless we get to super desperation stage, and we’re talking SyFy channel level of desperation in which a glacier is advancing at Mach 5 with a Sharknado on top of it while a San Andres Movie level earthquake is hitting the area. I’d throw in zombies but we’re already so jaded up here with them coming off the cruise ships in droves every summer. Realistically, and in all seriousness, if it comes down to a government enforced evacuation it’s going to be by ferry or by airplane. While I highly doubt that we’ll be able to take our vehicle with us even on the ferry, that means we’re going to have to rely what we can carry ourselves.

I’m getting there. As I mentioned before, one of our BOBs is the same weight as my toddler. So that means that either my wife or I will have to carry them while the other doubles or even triples up on the bags. In this kind of situation I’m looking at getting a frame backpack for kids that my toddler can ride and at the same time I’ll be able to carry a BOB (if anyone knows of a survival BOB/kid carrier, I’d be grateful for a link). In addition to the above items listed for my 2 year old’s BOB to last for five days, I also have to consider entertainment/distractions while we’re in the process of evacuation. For this I recommend buying multiple versions of your child’s favorite toy and/or stuffed animal and putting it in their BOB. That way if you’re leaving in a hurry, you don’t have to waste valuable time wondering where Mister Bear is at when you have one already tucked away and ready to go. One of your child’s favorite blankets might be something to consider for their comfort and peace of mind if you’re in the process of evacuating with them. If your child is anything like my toddler; then they’re going to want something comforting and familiar that reminds them of home while you’re on the move to safety.

I guess that in the end it comes down to the ages of your kids, what they’re capable of, and how much extra you’re going to have to put away in order to see to their basic needs. As time goes on, we go longer (Lord and Lady willing) without an event occurring, and as your children get older, their needs will naturally change until they’re at such an age that they can reasonably handle themselves in the event of a crisis. They’ll also learn from the example that you set for them and from what you teach them as you prep. These are skills that they’ll have with them forever. Teach them skills to survive, teach them how to keep a cool head, and don’t panic yourself. That, and a little common sense and hopefully you’ll come out of any situation reasonably intact.

Great Word you put forth. In my thoughts its all about priorities. 1. God 2. Family 3. Everything else.

One additional area of concern with children is their mouths. They need to be brought up to not tell anyone about the family’s equipment and skills. In today’s society trends, if the “busybodies” find out about the equipment and skills the kids are exposed to, then they may claim “child abuse” or “endangerment”. And if any S does hit a fan, anybody who knows about your preps will be on your doorstep. The BOB/child carrier scenario is indeed a problem. And the problem is not finding such a device. A BOB needs to be a weight you can carry all… Read more »

Ah yes, OPSEC and Situational Awareness. I’d forgotten about that. Thank you.

Thankfully, I live in Alaska so people up here don’t think twice about teaching kids camping and survival skills. I’d say about 9 times out of 10 it’s actually encouraged. My oldest child’s 3rd grade class went on a camping trip this past month where they learned a lot of the local environment and various uses of moss in the area around here. I actually took notes from them!

I like the idea of doing a ‘family load/split load’ BOBs. I’ll have to look into that. Thanks again!

When designing a split load, make sure every person has “the basics” suitable for their capabilities and skills, in case they get separated from the group. Best is if these are in pockets or belt pouch separate from the person’s primary load.

One thing you might consider for a solid-turf walk-out is a game cart, one of the folding versions that has straps and-or a net/canvas “basket” or something you can create that out of. If your absolute must-have is some water, a couple changes of diapers, socks and small bags, tarp(s) and blanket(s) for bivy and wind-rain block, the rest can go on the cart, as can the kid(s). It’ll let you carry a lot more clean water and things like inflatable flotation devices (if your ways in are boat and airplane, I assume water nearby), the entertainment for little ones,… Read more »

These are awesome ideas! Thanks!