When we think of winter prepper project idea, we commonly think of things that can help us beat or evade the cold and less about spending time outdoors. However, there’s a lot that winter (or early spring) can tell us about our properties, both for planting decisions, siting various things around our property, and for mitigating some of the weather that comes with winter and spring. A lot of it is information that’s hard to come by in late spring and summer. Winter is also an excellent time for indoor projects. This article will talk about the outdoors and assessments, but later I’ll hit a mix of projects we can tackle at the kitchen table.

Snow drifts can be useful guides for our homes – and an excellent test of how “tight” our winter gear is. Looking at where snow piles up and which sides it accumulates on tells us where the winds blow to and from in winter. That tells us: 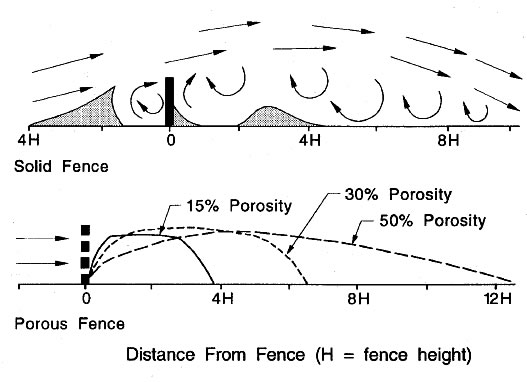 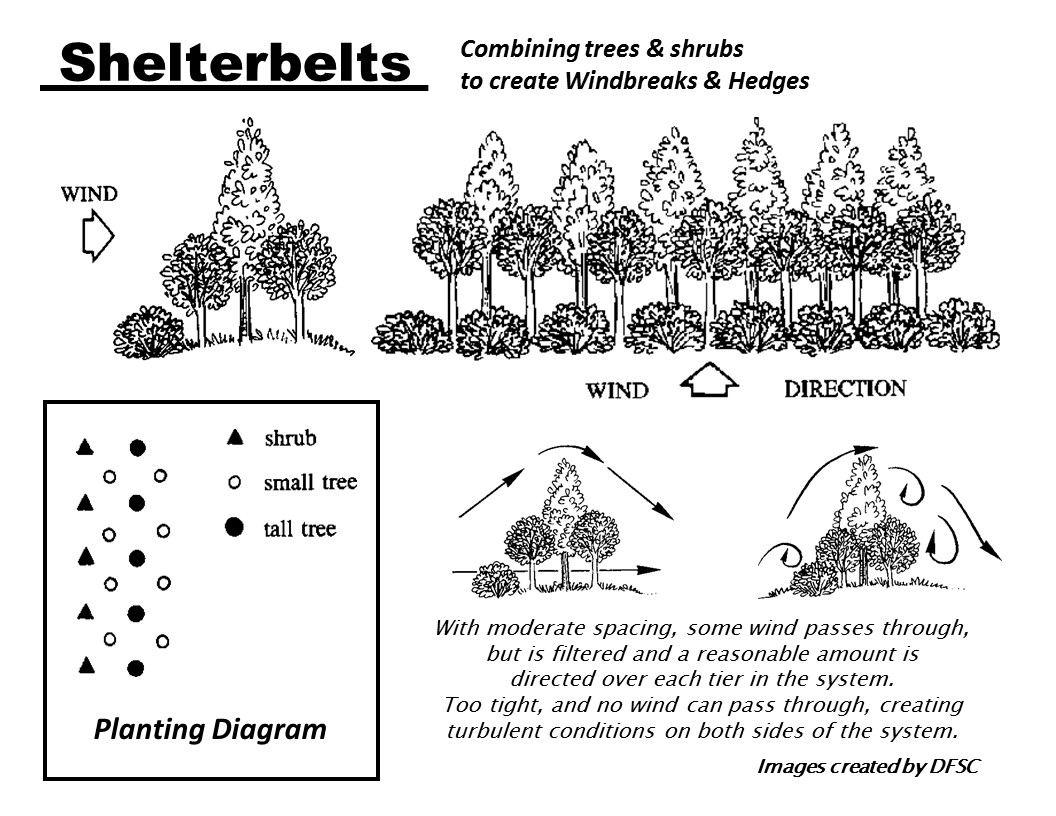 Similarly to tracking winter winds, we also want to be aware of summer winds, especially in areas where summer and autumn storms will rip away flowers or drop not-yet-ripe fruit. There are other ways for finding those directions and wind strengths.

Water is essential for life, but too much of a good thing can be bad. Locating the paths water takes and the places it collects and stands can do several things for us. The key to reducing water damage to buildings, the land, and our plants, and to using it most efficiently, is to locate both the areas where it pools and stands, the areas it’s running fastest, and the points of origin. The origin points are both where it’s entering our property, and how it’s getting there.

Sketch a simple plat map of the property or areas on the property, and make notes during rains, snows, and melting periods. It’s as simple as looking, although some stomping to see how sodden an area is is invaluable. Winter and spring with their typically greater wetness levels are ideal for finding a property’s water trends. 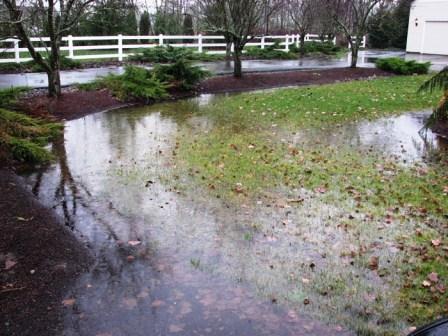 Permie S’s  – Locating the pathways of water on our property allows us the opportunity to Slow It, Spread It, Sink It & Store It. That might be creating swales or keylines to increase infiltration or to move the water somewhere we’d prefer it, building hugel beds in a system to absorb some of it and redirect some of it, or seeing if we can harness it in pools or water catchment systems at the point of origin.

Frost Pockets – Those places that water pools in a storm or melt cycle are going to be the low spots. Low spots tend to collect frost early and late in the season, damaging plants that are located there. They’re also going to periodically turn into a skating rink in winter, which can make them a poor place to park vehicles or situate the shed with the feed in it. 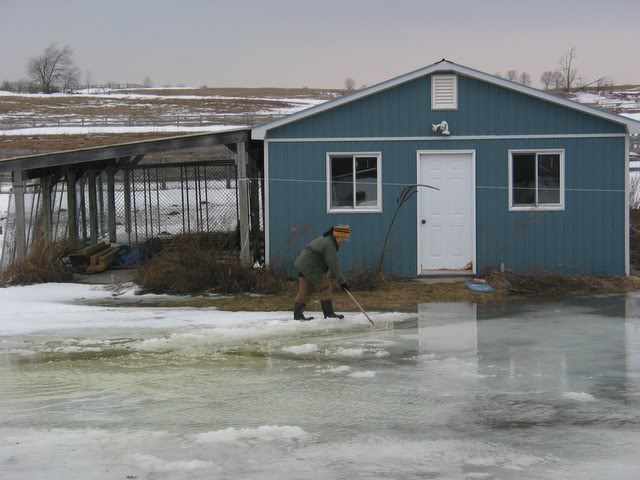 Cold Water – Soil temperature affects plant germination and growth. Crops like corn won’t germinate at all in cold soils, and cold-soaking rains can stunt or kill off other warm season crops as well. While it’s less of an issue in later seasons, locating crop fields where they’re regularly inundated with cold spring rains and winter snow-melt runoff can damage our density and yields, or delay our plantings by weeks or a full month and a half in some places. 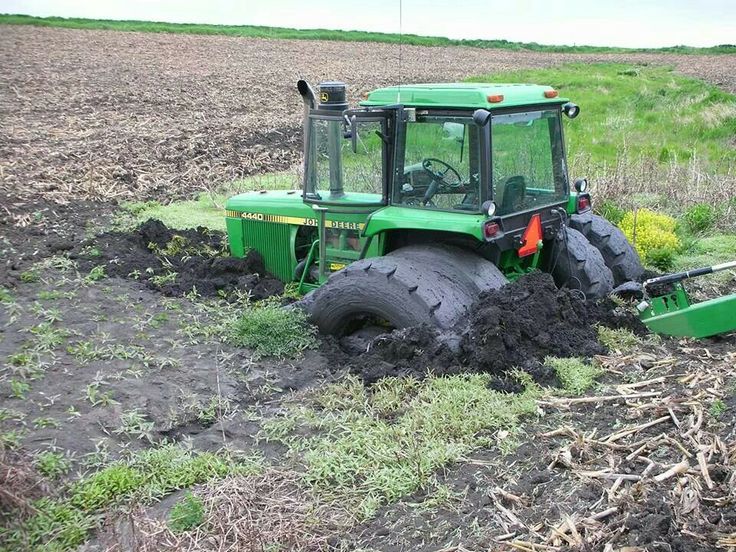 Oops – It looked dry enough, and it was solid getting out … right up until it wasn’t. Knowing the sodden spots of our property ahead of planting – now or in a disaster – can help us avoid losing time or seed on soils that stay soaked late in the season and re-soak quickly in rain storms.

Standing Water & Soaked Soils – Pretty much any seed can be pre-soaked to speed germination, but that’s a temporary thing, usually numbered in hours. Seed packages mention “damp” or “moist” soil because it’s one of those “too much of a good thing” cases. Inundated soils will increase rot in both seeds and seedlings, costing us days or weeks as it dries out. Our planting can also be delayed if we site our crops in areas that don’t consistently dry out until weeks after the traditional start date for our area just because we can’t get a tractor or push tiller in.

Wet fields can also lead to delays in harvesting first-cut hay, decreasing its quality and possibly preventing later cut(s). Cutting by hand is laborious and while it allows increased access over a tow-behind, there’s still loss potential from ground rot. Wet green hays that are baled also sometimes spontaneously ignite, which can cost us not only feed, but our livestock and sheds, if not our homes as well. 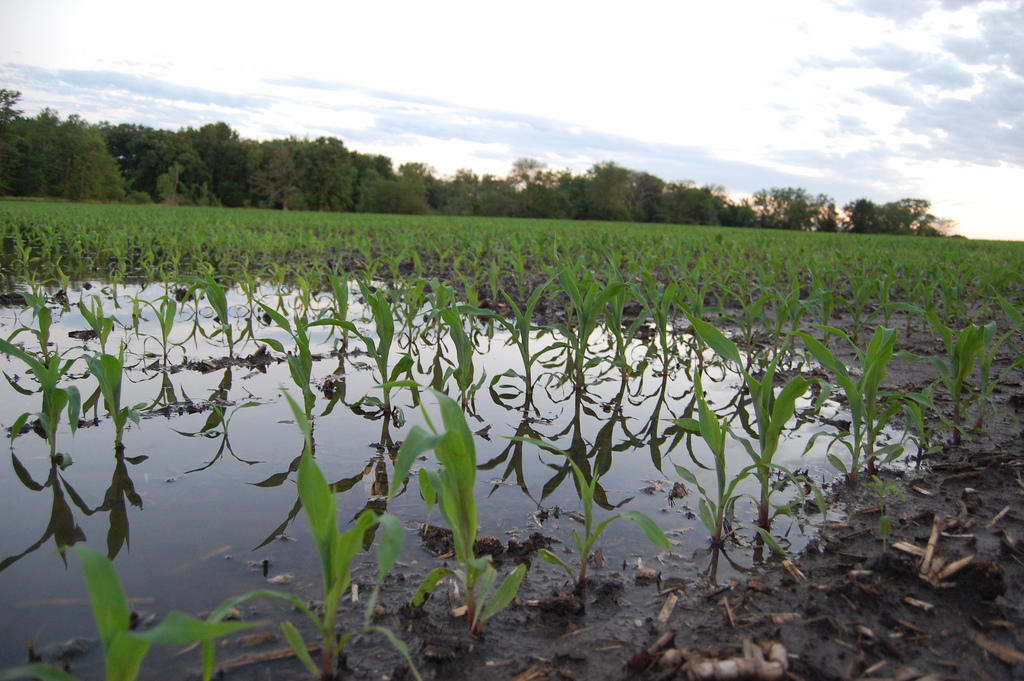 While most of the water checks can be done just by visualizing the surface, in this case, it would not hurt to walk around with some hollow bamboo or a steel pipe, a tulip planter, or a skinny fencepost shovel. We want to stab down into our soils every 2-3 days after heavy rains and during the periods leading up to our planting dates (and after) to see when exactly it dries out.

We also want to repeat this process after we seed if we plan to expand later, because little is worse than heavy rain cycles that leave us staring at wasting crops from our windows as our plots turn into bogs and lakes. Tracking the water on our property during the traditionally wettest periods of the year can help us avoid that.

Pasture/Paddock Damage – Areas that collect water are a bad idea for livestock. Sodden soils don’t hold grasses and dicots very well. Hooves and claws end up tearing the plants free and destroying the roots, even when the turf starts off in good condition. Likewise, damp ground increases bacterial and viral diseases and causes additional hoof, foot and feather conditions. Once those pastures and paddocks are bare earth, it’s hard to reestablish growth if livestock stay in place. Rebuilding the turf – even a mixed “weedy” field – requires feeding off hay and grains and in most cases reseeding. 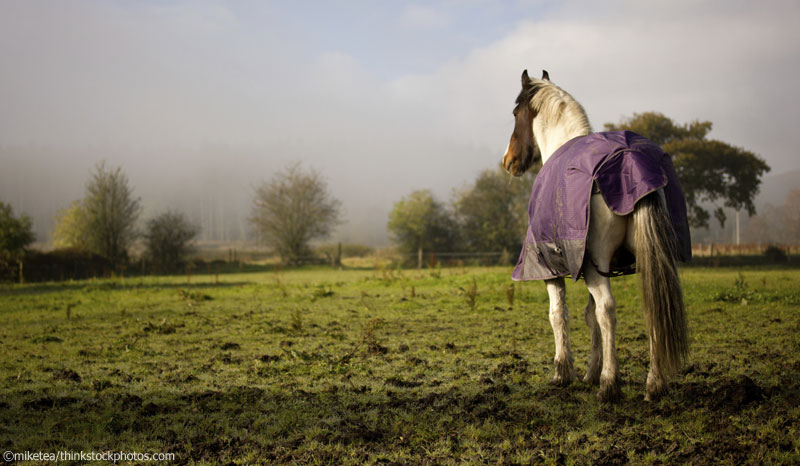 Untreated pasture problems will only compound over time.

There are fixes that work for smaller animals such as chickens, but they commonly involve planting specific things that help absorb water (willow, bamboo) and then allowing those plants time to establish so the birds maintain their size without wrecking them, or mulching to depths of 6-18”. Deep mulching isn’t a terrible idea for chickens anyway, as it helps limit waste buildup and gives cooped birds an activity (poking through the mulch for critters) but that mulch does have to be replaced. It can be anything, from chips we do ourselves from firewood cuttings to pine needles and raked leaves, but in some warm, humid areas the sheer volume needed is going to be prohibitive.

In the long run, it’s typically just better to do something else with those areas.

There are always exceptions to a rule. In the case of frost pockets or saturated soils, especially the cold water of early spring and resulting from winter snow melt, we might decide the delays in planting and pasture rotations are worth it. One reason might be if the surrounding areas are elevated with thin soils, and end up dry for the rest of the growing season. We might install hugels or* swale systems on the slopes surrounding a pocket for our veggies, or plant them for silvopasture or fodder shrubs, and choose to take the delay for main crop calorie staples rather than have to find a way to irrigate those.

*OR; Or is an important word. In this case, it means one OR the other, not both unless you are a hydrologist who has crunched the numbers. We can create a potential for bad things to happen by combining the two – there is such a thing as too much of a good thing. 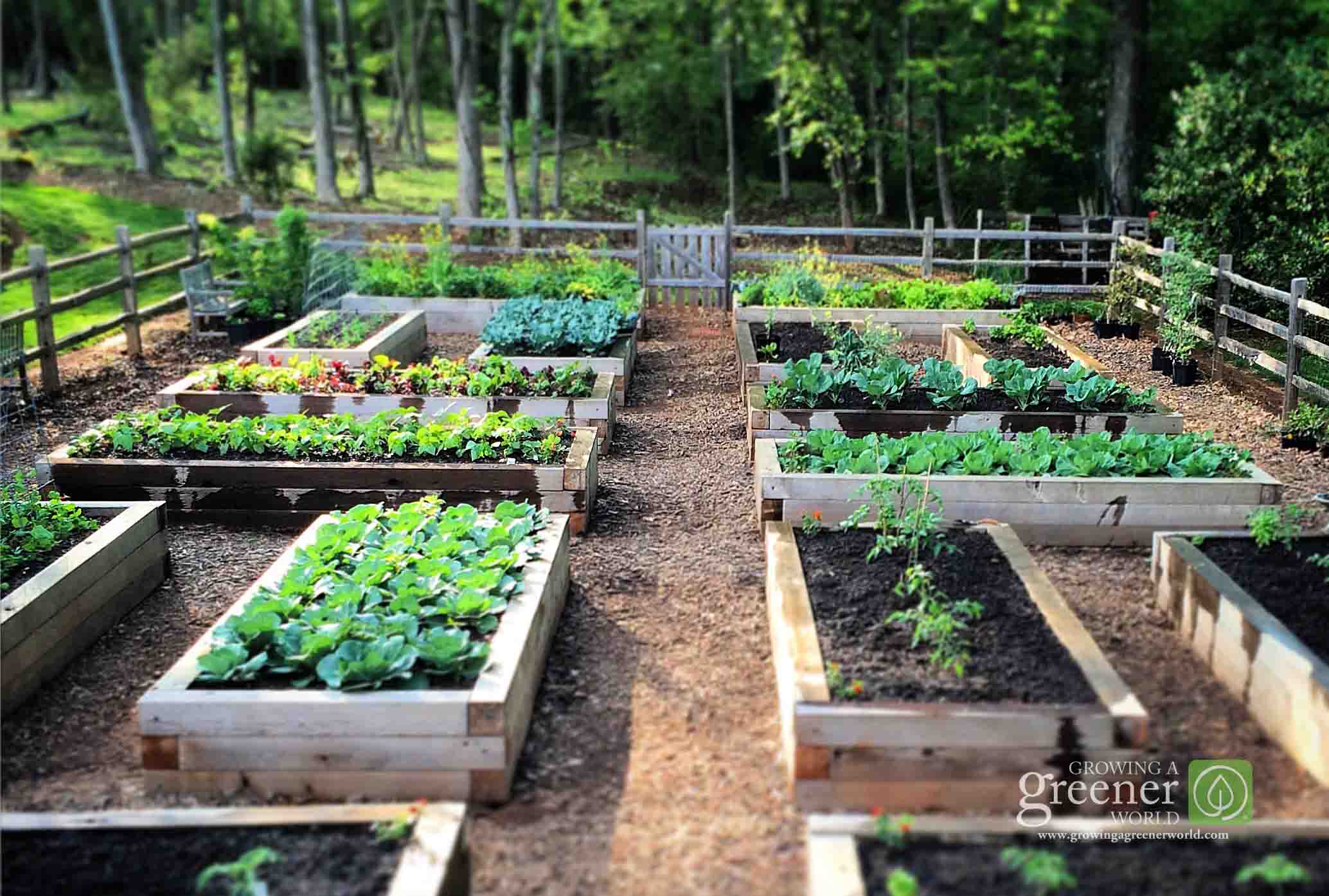 We can also buy growing season in sodden areas if we need to by switching to raised beds – conventional soil-filled bounded beds, unbounded Eden-style or lasagna-style low beds, or hugel beds – anything elevated and able to wick up only as much water as it needs. There are tradeoffs to anything in life, though, and raised beds and aquaponics are not going to produce large scale calorie staple crops for the most part.

It’s about prioritizing what we need most. Knowing is half the battle, though. If we don’t know what conditions can hurt or help us, and where they are, we can’t even begin to prioritize which trees or woods to harvest and which to let stand, where we want to locate small livestock, a kitchen garden, pastures or annual crop plots, or perennials.

We can take advantage of the winter wonderland outside our doors in a lot of ways, and in another article I’ll hit some that are ideal for a shed or kitchen table. The biggie in this article, though, are the ways winter’s snow and mud can help us plan.

Here are a few more projects to consider for wet and icy months: 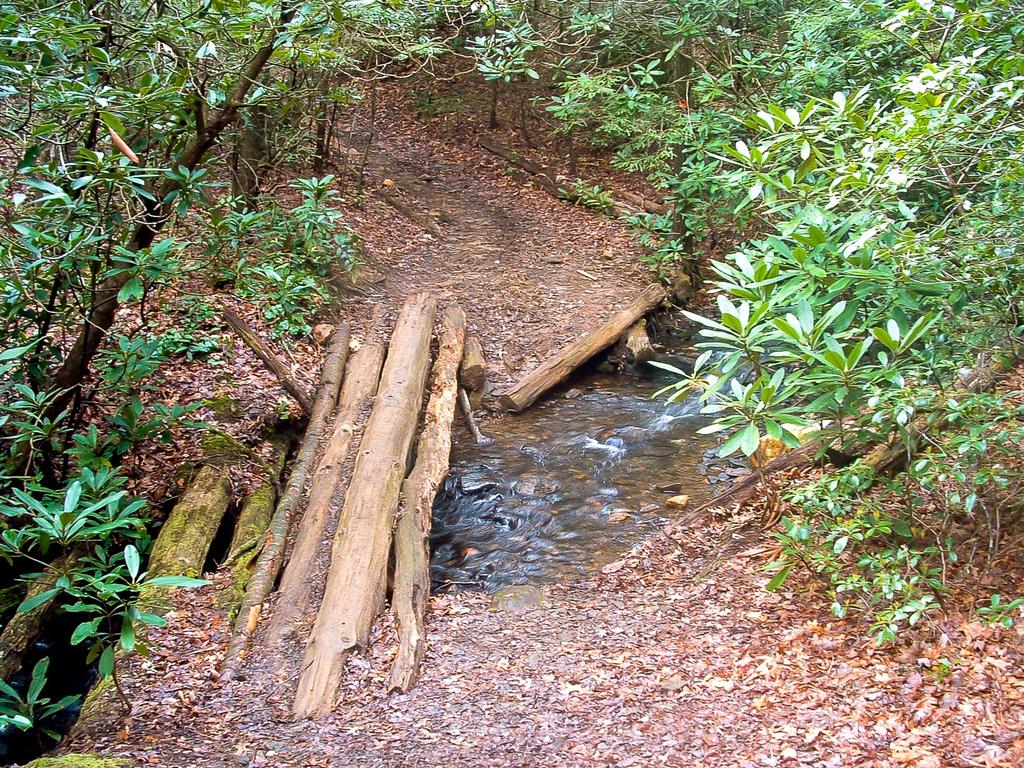 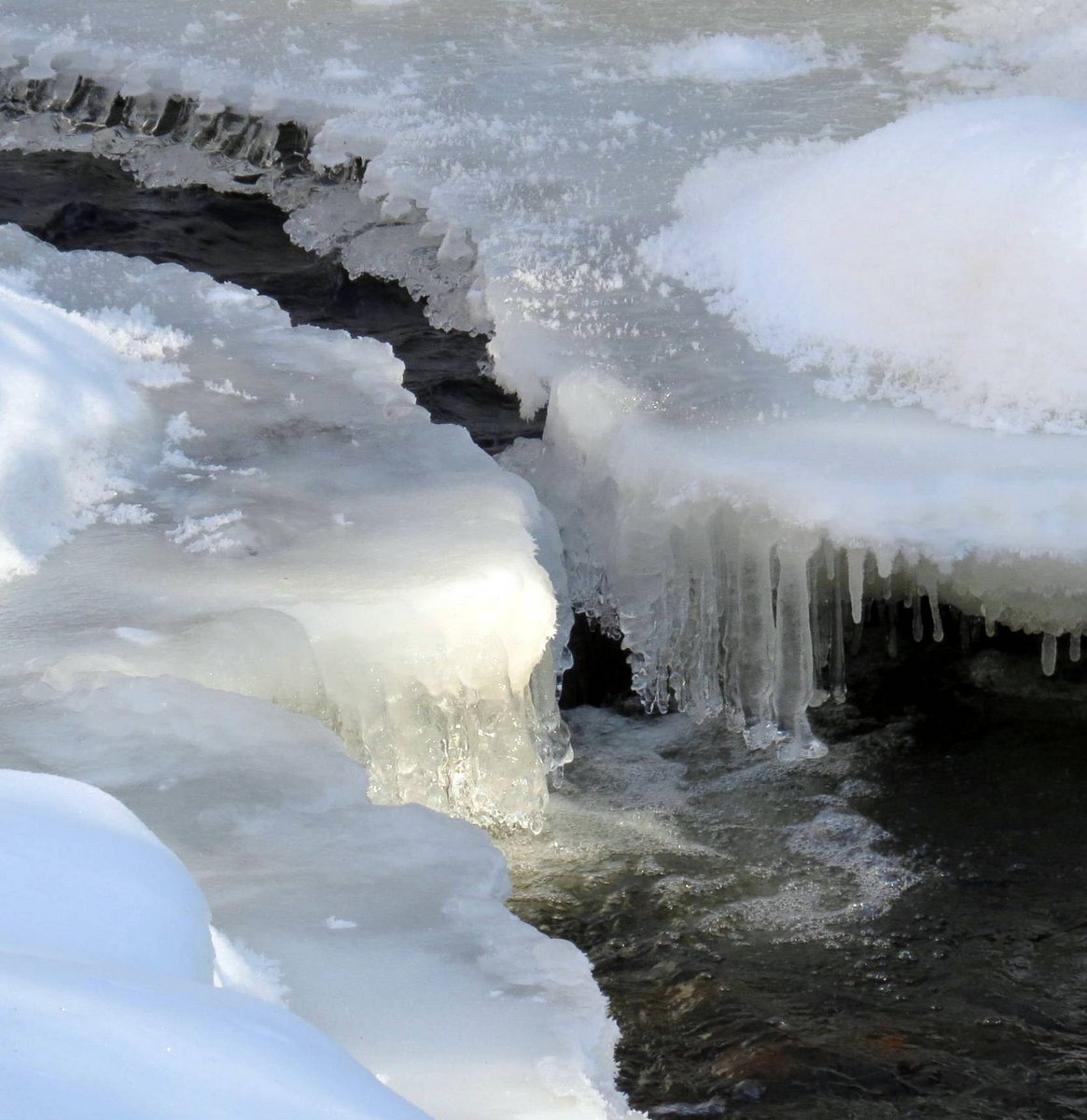 Running water is undercutting ice at the edge of a creek here – that’s a slick or collapse disaster waiting to happen even as narrow and shallow as they are if we’re planning to fill jugs and buckets here.

Our yards in winter and early spring can offer some of the best information about our properties. It’s worth taking a stroll and making some notes. There are also tasks that are just easier without insects, snakes and heavy growth, and while plants are dormant. Winter can still be a time to rest, but if we want our properties to be most efficient, a few outdoor tasks here and there can make a big difference in our planning.