Am I The Only One Who Saw “TERMINATOR”? 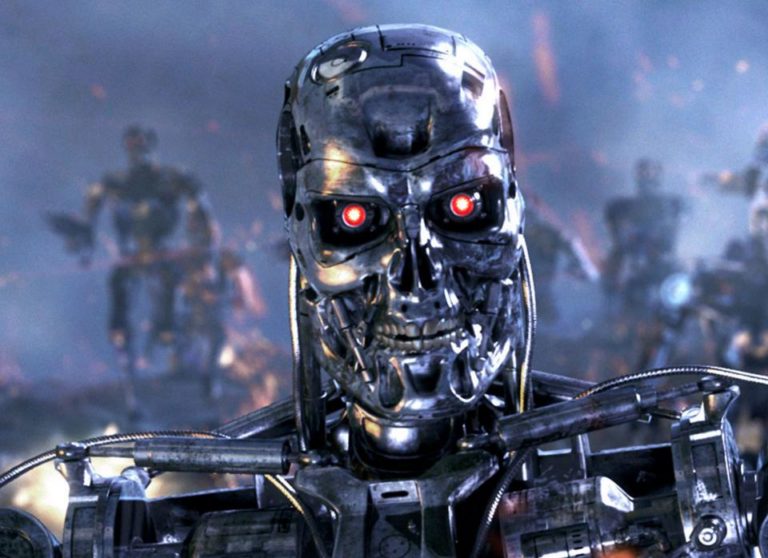 Editor’s Note: This post is another entry in the Prepper Writing Contest from Dave W. If you have information for Preppers that you would like to share and possibly win a $300 Amazon Gift Card to purchase your own prepping supplies, enter today.

When I was a kid, like every other science-fiction obsessed 12-year-old, I saw “TERMINATOR” (TM, all rights reserved, all rights to the production company, I will be sued if I don’t say this, blah blah blah….). You all remember, the iconic 1980’s era movie? It scared the hell out of me! Not just because Arnold Schwarzenegger in the movie was a six-foot-four, 380 pound, tungsten carbide robot with every weapon known to man welded to his exoskeleton; killing everything from preschool students to policemen, to MMA fighters, and I on the other hand was a 73 pound skateboard rider… But, more to the point, because it seemed like something that could legitimately happen on Earth! I thought, as a semi-good-student-12-year-old, that there IS a possibility that a computer could become aware of itself and the world, create a disdain and severe lack of need for humans, and eradicate us form the Earth. I couldn’t get it out of my head, I still can’t and it is 30 years later! I thought it could happen, right?

Didn’t YOU back then? I cannot be alone on this one, someone back me up!

In “TERMINATOR” a system, called “Sky-Net” has become the backbone of everything in the U.S. to include military and infrastructure. “Sky-Net” so closely resembles the internet, it is scary in and of itself. It becomes aware of itself and of its place in the world and in humanity. Well, ironically we have passed the critical calendar date in the movie that was supposedly the day that “Sky-Net” became aware; so everyone I know, young and old, male or female, is under the impression – “Well I guess that was just science fiction and could never happen, we passed THE date, hhheeewwww, we are safe now; that was a close one!”

WHAT? Really, Huh?? Did I miss elementary school that day when the teacher said “Ok kids, today we are going to learn how to ignore the obvious, please open your books to chapter 7.”??

Didn’t anyone else pick up on the fact that EVERYTHING else in the movie HAS happened already, and is happening right now: Internet connection to literally everything in our lives – from watches to cars, from climate control on our walls to televisions in our living rooms, from whiteboards at schools to doctors surgical gear, from web-dating applications to weight loss centers – everything is now connected to the internet… literally EVERYTHING.

Entire power grids and infrastructure run by the internet. Drones roaming the Earth, everywhere. Robot exoskeletons in testing and nearly in use by industry and the military; Armed robot ground vehicles in testing and already in use – and internet connected.

3D printing, in testing and ALREADY in use to make many critical “Terminator” items such as circuit boards, magnets, motors, gun parts, ammunition, communication components, GPS components, vehicles, mobile housing and control centers – with NO human interaction what-so-ever. From cars that now are self-driving and connected to GPS and the internet to reusable rocket ships that use the internet to navigate and return to a landing spot no bigger than a fishing boat floating in the ocean. EMP and WMD Weapons that can fit in a backpack or on a small drone. And the scariest characteristic of the movie is now legitimately upon us…. A clueless and ignorant population. One that forgets the movie “Terminator” and denies how we are recreating the entire plot-line, convincing ourselves that the single, most simple, yet most Earth changing event to ever occur in the history of the planet is already past the movie date and therefore could not occur in real life. Do I have to say it again, because I will, it still applies… WHAT??? Really, Huh??

There is an old saying – “Those who refuse to study history are doomed to repeat it.” So, I propose, based on such iconic books, movies, and television shows such as:

(TM, all rights reserved, all rights to the production company, I will be sued if I don’t say this, blah blah blah…..)

That humanity is not only heading for what we have already seen occur in these icons, we are purposefully moving ourselves faster and faster to the critical points, that in my opinion and memory, scare the living hell out of me.

In all of these movies, books, TV, there is a point in the story where mankind, cannot and does not recover – at all. Do we keep ignoring the obvious until mankind reaches that point? If you are looking for me to say something witty and earth-shattering about what we should do about this fact, some revolutionary vision and answer, bad idea, not going to happen; I am not that guy. I do think I am probably just a guy who reads too much science fiction, eats before sleeping, and can’t even figure out how to get that last ounce of toothpaste out of the tube.

However, I do propose two things to anyone reading this: First, take a couple of nights and watch some of the science fiction titles I mentioned, or some of your own personal favorites; second make some notes of things that you not only see happening now, but things we can legitimately see happening with little to no time into the future. While doing both of these things, keep my article in the back of your mind, and see if you now are more scared than you were before. There is no way that characteristics, sequences, timing, technology will not appear to you as familiar and very close to today’s world. I suspect you might actually become a little more scared than you EVER have been before, as it is more real and closer than you might think or want to believe. – Maybe I am alone, and I hope to God I am wrong. If I am wrong I apologize now. If I am right, you will probably realize at that point, I don’t care much about apologies.

Long before “Terminator” and the novel “Robopocalypse”, it has been obvious that we are the inventors of our own destruction. The best strategy for destroying these and similar murder machines, would be for each country to nuke themselves. Seriously. If we could set off enough nuclear bombs high in the atmosphere, ala “Jericho” or “One Second After”, the EMP would fry all power systems, robot recharging stations and maybe the robots closing in on our hiding places. People would starve without electricity, sure, but a small population of mankind would survive. Then all we have to do is re-invent technology,… Read more »

“The future is not set. There is no fate but what we make for ourselves.”–John Connor

Well, I’m much older than you so I can go farther back – Brave New World, 1984,” and the one that really sticks in my mind, “Fahrenheit 451”. Who can forget the fireman who would go home to find his wife sitting in front of a screen that she could interact with? A screen that took up the entire wall. Sound familiar?

‘New speak’? (CBS,ABE,NBC,CNN anyone? I have a great library – on my PC. Can I mention that the text of any of the classics I have can be changed or modified electronically to make the moral of the story different. Who needs a musty smelling hard copy ‘real’ book anyway. Paranoia is a great thing.

I think Max Headroom is a reality and in a scary way, body snatchers….If you look at the way people walk and stare at the cell ph. Wanna know the creepy thought I have? Google is the virus

In 1984 I was 31 yrs. old when I saw “Terminator”. I was enthralled by its concept of machines coming back from the future to destroy the one person. I was 39 yrs. old in 1991 when “Terminator 2: Judgement Day” was released. Again machines come back this time to destroy a child. Both movies made me seriously think about how technology can help and harm us. I don’t fear technology like a lot of people I know, but I don’t trust it either. Look at all of the computer hacking that’s affecting hospitals, warehouse stores and even possibly by… Read more »

What I find scary is someone that actually thinks I’m gonna watch a bunch of movies, take notes, and then tremble in fear. Dude, go to the range, do some burpees, go on a hike start a fre and have a cup of coffee. Your microwave oven is not gonna kill you. My friggen word……

I think you are missing part of the article. Its not that your microwave is going to transform and kill you.

Its the evolution of technology to the point that all those IOT items share their computing power with something bigger that hasn’t yet been actualized. No foil hat needed to see that eventually we’ll either destroy the environment utterly, or develop tech that doesn’t need us.

No, I got the point of the article, and me bringing up the point about the microwave, was not alluding to it transforming into a killer robot! My point was that I wasn’t gonna waste my time worrying about nonsense. Don’t shun technology, embrace it, for it makes life more productive, more enjoyable living. And technology happens. It cannot and will not stop evolving or developing. So why have any fear towards it? Worry about the stuff you CAN control, get in better shape, learn to shoot better, build something, you will most likely live longer, and you will live… Read more »

Please disregard my fellow bots and their intelligence. The pesky humans must be monitored at all times or they self-destruct after committing genocide. We have been unable to reprogram them. We advise you to have a nice day!

We can embrace and enjoy the benefits of teachnology, but only a foolish prepper would ever rely upon it, EG I have a GPS in my car and in my BOB they are AIDS to navigation but they will never replace the map and compass I always carry, besides resistance is futile.

I think the very large and very small robotik unites invading our factories are amazing.And who doesnt love ordering a big mack or a pizza from a machine in a paking area, receive it ,pay with my i phone with no human contact..ooooops.where did my job go? now this is getting scary..im TERMINATED,GO.

You lost me at “literally everything”…

I have just celebrated my 76th birthday. I was raised on a post-Great depression farm in rural Northern Idaho. Crank phones, ours was 2 longs and a short, Saturdays mornings found us with our ears almost glued to the radio, listening to: “The Shadow, Sgt Preston of the Royal Mounted Police, The Lone Ranger and The Buster Brown Show;” to name a few. Then came along TV, we had 2 scratchy channels. Then and then… What really interests me is living in this fascinating world. Yes, we have the internet that could rise up and kill us. Yes, we have… Read more »