What’s the Best Close Quarters Weapon: Knife or a Gun? 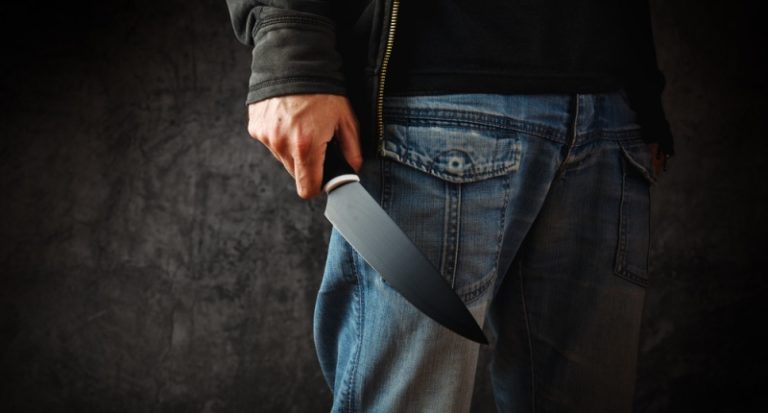 Editor’s Note: This article was generously contributed by Orlando Wilson. If you have information for Preppers that you would like to share and possibly win a $300 Amazon Gift Card to purchase your own prepping supplies, enter the Prepper Writing Contest today!

I am always being asked which is better for close quarters self-defense a gun or a knife. Both are deadly weapons if used properly but what is properly. At a close quarter’s range, which is conversational range, say about 10 to 15 feet, the main thing will be if the weapons are deployed or not. Whichever one is deployed first gives the user the advantage. For the shooter at this distance you can forget the textbook formal line up the front sight shooting techniques, they won’t work and for the person with the knife forget the Dojo sparing techniques. A lot would have to do with strategies, which seem never to be covered in formal firearms or self-defense training and then non-PC aggressive action!

Knives are excellent close quarter’s weapons and have a lot of advantages over guns, like being legal availability in most places for one. If traveling internationally 98% of the time you can’t take firearms but should be able to pick up a pocket knife at the end location. The tactical knife does not need to be a $200 + custom tactical blade, if you go to Wal-Mart you can get a paring knife that can be concealed and can slash and stab very well for under $10!

When dealing in Eastern Europe in the mid 90’s I was surprised to hear from several law enforcement sources that the gypsy kids trained with knives, were skilled and were a not to be taken lightly. While in West Africa last year we were running all out tactical drills including hostage rescue with machetes, where the bush was thick it was very easy to stealthy get within a striking distance of a target. The proper use of knives relies on speed, surprise and aggression.

So, on the street for argument sake, who would have the advantage, the person with the knife or the gun?

Always my first choice too. Deals with even severe numerical disadvantage and rarely needs to be deployed. Two is better. In case you do need to deploy one. Nobody argues with number two.

Inside personal safety spaces (IE the distance all around you can touch arm outstretched) I go for knife or baton, outside that 360 arc I would choose a fire arm

Baton. A short axe or splitter handle of really good timber and a rubberised handle with a lanyard. You can use a length of bicycle tubing to make a rubber handle. I like them better than a knife in close and with more than one attacker especially. If I don’t happen to have a hand grenade anyway. 🙂

Again, we make “assumptions” that WE, will be in Condition Oblivious so that we cannot see danger approaching. The best defense against being ON a CQB “situation”, is to not be in one, wherein you are “forced” to make a choice between the blade or a firearm. At that point, you are already screwed beyond belief. I have no intention of ever going to another knife fight, I will flee rather than allow anyone to get that close. Call me what you will, I can handle it. I prefer “conflict avoidance”, above all else, however, IF, that conflict keeps coming,… Read more »

Naturally, and as one gets older, the avoidance strategies improve too, but it is nice to have options. We don’t get to write the script from day to day usually.

Hi Mike, Your answer is also my answer, and it makes sense that Murphy’s Law is very dominant. Anything can go wrong, even when you are paying attention to all your surroundings. When a person has lived as long as me, age 67, and also been in combat, like my 2 years in Vietnam: 68-70, you learn to adapt, improvise and over come. You may never need a “2nd weapon,” but why take a chance. But I regard knives also as “tools.” My email: [email protected] — My humble Blog: TOM’S JOURNAL. Jesus is Lord.

Agreed we learned to do what we had to do in order to survive. I was 17 when I went to Nam. A stick skinny kid who had to prove himself to everyone. I hated being called “The Kid” so I wore ears….

Link to Tom’s Journal? Knives are tools and I wear one all the time just like my CCW.

Tom’s Journal– Blog://tomschuckmanjournal.blogspot.com/
Welcome home, Brother ! I wear a Cold Steel neck knife, too, buddy/ Man ! We should compare notes…. so email me, sir: [email protected] I served with the 240th AHC, Helicopter door gunner on my 2nd tour. What a rush ! Take care of yourself and many I can help you with a few things. —Tommy S

Good article, but as ET1 says, it was too short! Here is a question that other readers may have also pondered: I always carry a fixed blade survival knife (5″ in length) when out in the bush, as well as a folding Buck knife and a regular pocket knife. I view these more as useful tools for dealing with general survival issues, and that is all that they have ever been used for. But, what do you do when you aren’t trained in knife fighting? Most people aren’t. My preferred means of defense is a long arm and side arm,… Read more »

Bolo, it would seem that the scenario you have described (10-15) would imply that you already have your opponent in your sights. If you have the drop on someone in a combative situation, I’d still only give you a 70% chance of dropping an aggressive, street-wise tough. Unless you have extensive CQB experience, tension, anxiety, adrenaline, fear, distracting thoughts about family will play a role in determining your reaction. Delay is at a minimum a serious detriment to ones health. The reality to me, is that unless you are a combat tested Soldier/Marine, chances are our balls are bigger than… Read more »

Excellent thoughts, and I have practiced both shooting techniques that you reference. I should add that my carry in the field is in a shoulder holster, with a round always in the chamber. I don’t see how I could pull a fixed blade knife any more quickly. Having only a knife means that you are forced into a combat range of less than five feet. I like those odds far less.

I wasn’t, and wouldn’t suggesting only carry a knife if at all possible. I was discussing the time it takes to bring a pistol to bare on an advancing aggressor vs an aggressor’s closing speed. As for carrying a weapon with a round chambered, all I would suggest is that you practice with it regularly. Not speaking about anyone here, but Iike I said earlier, many can manage the ‘handgun and chill’, but when there is no chill, bad things can happen. I don’t chamber. I still recall some excellent articles by Massad Ayoob (forgive any misspelling) about creating space,… Read more »

Sir,who said any thing about chambering a round?

Just be sure you know the laws of the areas you frequent and occasionaly visit.

Be aware , be alert.Stay clear of trouble spots.IF a confrontation is unavoidable or sudden ,i carry a 5 inch spring knife but i can tell you ,always one in the chamber,8 rounds in the clip,weapon 22 cal. in my coat or pants pocket makes quite an impression at 8 rounds in 4 seconds.You will need a new coat but suprise is very effective.Even the noise akes an agressor hesitates.

Formally trained shooter against martial artists: Even! — I dont agree, .. ask anybody would they rather have a gun or a knife, and I gaurentee you even the knife fighter will want a gun.. Formally trained shooter against someone who can use a knife properly: The knife! -..I dont agree…do you really think somebody with a knife drawn same time as a gun, would be even or better? even if, you could throw the knife with any deadly accuracy, I could fire at least 4 times after knife hit me.. you only get 1 throw. I still have 3… Read more »

I suppose if you are dueling with a knife-equipped aggressor at range this would work.

At home or office I like to have an nice bit of hardwood block splitter handle with rubberised grip and a woven lanyard. It can keep most knife attackers too far away to engage and do them the hurt in turn and within the couple of paces distance referred to it can deal with a gun and disable the arm holding it given sufficient reaction time which unless a gun is cocked and pointed at me I should have. It can be thrown effectively thus disabling someone long enough to allow a follow up attack as well. It gives a… Read more »

the distance covered by the bad guy with the knife, versus a good guy and a holstered gun with both persons at a stand still, used be 21 feet (at least i was taught when I went to the police academy, not long after the invention of the wheel). then, later on in my refresher academy classes the distance was increased to 28 feet. now the distance taught by the instructors is 31 feet between combatants. either way, there were times when I thought getting shot was maybe a little better than being gutted with an edged weapon…however having said… Read more »