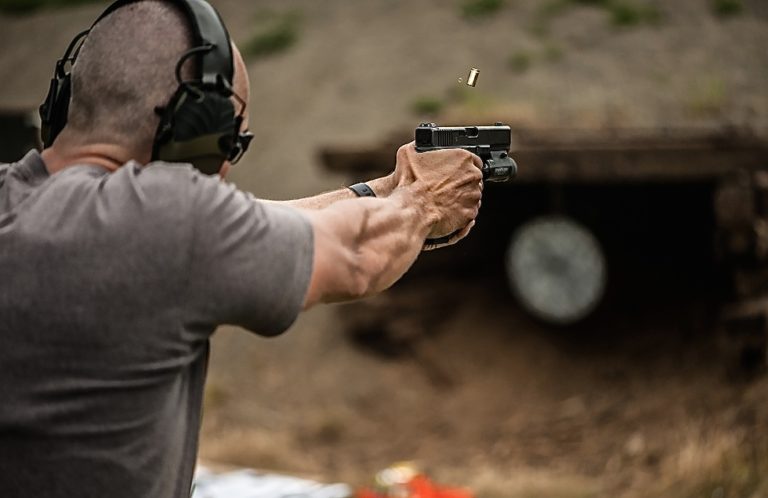 Editor’s Note: This article was generously contributed by Orlando Wilson. If you have information for Preppers that you would like to share and possibly win a $300 Amazon Gift Card to purchase your own prepping supplies, enter the Prepper Writing Contest today!

Once you have selected and purchased a handgun you then need to learn how to shoot it accurately. If you have never used a handgun before, go and get some training in defensive shooting techniques. Some people, usually men, who have limited firearms experience but believe they, know everything about firearms will not undergo training. This is an ego problem and a sign of insecurity, which can end with innocent people getting hurt. Many people do not realize that the handgun techniques you see on the TV and at the movies do not work in the real world. You cannot learn how to use firearms by reading a manual or sitting down watching DVD’s or videos on YouTube, you have to go and practice. Many former and serving law enforcement and military personnel continuously seek and undergo further firearms training, because they are professional enough to know they can always learn something new and improve their skills. Firearms skills must be learned properly and then regularly practiced.

There are just as many people in the firearms training business that claim that their system is the best, just as there are self-proclaimed experts in the world of the martial arts or other fields. You can argue tactics all day and you will still get nowhere. You must find a system that works for you and learn it from an instructor who has both a good reputation and verifiable real world experience. The best systems are simple and not overly technical. If you are ever unfortunate enough to have to use your handgun in self-defense you want to be concerned about getting rounds into the bad guy, not having to thinking if you grip is correct and if your feet are in the right place.

There are many people confusing competition shooting techniques that are developed for sports and hobbies as realistic tactical training. Big difference number one, on the streets the bad guys don’t care about the rules and will be shooting back. I have had students come through my courses that have been taught and trust techniques that look cool and work in an air-conditioned shooting range with no stress but have completely no relevance in the real world. On the street, fancy techniques that overly stress safety will get you killed and hopefully only you and not those you’re possibly protecting.

You need to realistically think about how you would handle being in a hostile situation, not on a comfortable shooting range, but being attacked by criminals in some dark parking lot or your home in the early hours of the morning when there will be no one to help you. The police, if you’re lucky, maybe, there in 15 minutes if you are able to contact them; think about what the criminals can do to you and your family in those 15 minutes. Visualize this situation and determine how you would genuinely feel and determine how you would react in the seconds you may be lucky to have to reverse the situation on the criminals. There was a saying I picked up in South Africa in 94 and agree with to this day “The police are just there to pick up the bodies”. Most police like to tell you they are your protectors but the reality is, if you’re involved in a hostile situation they will not be rushing into save you, they will be thinking about their own skin. They are happy to do the after incident paperwork and to arrest you, if you live, if it means brownie points for them or, in a lot of places, an opportunity to extort money from you.

The Fundamentals of Defensive Shooting

The subjects that should be included in your tactical training are defensive shooting both left and right-handed, drawing from concealed carry, using different fire positions and use of cover. If you are going to work with or carry a firearm, you should undertake stress scenario training. This should include dry and live fire contact drills, in different environments, i.e. in a vehicle, in a street, in a restaurant and so forth. Proper training, handgun maintenance, carry technique/firearm access, aiming, grip/trigger pull and shot placement are the basic factors in defensive shooting.

I would like to see first hand the references used by the author. To cite that the “two calibers used against American law enforcement are 9mm and .38 caliber”.
At one point in time, that may have been true, however, I believe the author’s references are a tad dated. Yes, it does matter a great deal.

I guess the question begs than what do you think the two calibers most likely used against Law Enforcement. The reason those two are list is because that was the most common calibers carried by LE. Yep, cops were shot in a high percentage according to the FBI by their own weapon. That is why you see LE using holster today that focus on retention and not speed. We always remind officers every call the go on involves a gun, because they brought it with them!!!

Had to fix typos!!!
I guess the question begs than what do you think the two calibers most likely used against Law Enforcement. The reason those two are list is because that was the most common calibers carried by LE. Yep, cops were shot in a high percentage according to the FBI by their own weapons. That is why you see LE using holsters today that focus on retention and not speed. We always remind officers that every call they go on involves a gun, because they brought it with them!!!

From FBI’s report of LEOs Killed in the line of duty 2014:

Offenders used firearms in 46 of the 51 felonious deaths. These included 32 incidents with handguns, 11 incidents with rifles, and three incidents with shotguns. Four victim officers were killed with vehicles used as weapons, and one was killed with the offender’s personal weapons (hands, fists, feet, etc.).

Took me a while to find it but looks like in 2013, the .40 was the top caliber used to kill LEOs at almost 50 percent where a handgun was used.

The question about the caliber of handguns used against LEOs is both valid and irrelevant. The primary handguns currently in use by police departments are .40 caliber, 9mm and .45 caliber (a distant 3rd place). If there are any police departments still using .38 caliber, I’m not aware of them and relevant searches on the Internet yield no clues. Whether you are a police officer or a civilian, if you are shot at a distance of less than five feet, it is unlikely that the specific caliber of the bullet will be an important factor in your death. Orlando has… Read more »

It didn’t say that the police dept uses them, it says that they get shot with them, meaning the criminals shoot them with 9mm’s and / or .38 ammo 🙂

According to the FBI the .40 was the most common handgun caliber used against LEO in 2013. It was just shy of 50 percent. I posted a link to the stat but it awaiting approval by the site moderator.

The author says that police are only worried about their own skin and will gladly arrest you. What about the brave officers in Dallas and Louisianna? The we’re murdered protecting black lives matter protesters and normal citizens. I hope this wannabe never calls 911, he doesn’t deserve any help. I
Retired from the PD after 28 years so I’m qualified to call bs on this guy.

I think the fact he’s comparing American Law Enforcement to South African Law Enforcement is offensive in itself. Only in the U.S. are LEOs considered public servants, everywhere else they are considered civil servants. There is truly a difference between the two. American LEOs and other first responders regularly run towards the danger not away from it. He is correct in the fact that LEOs in 3rd world countries tend to be worried about their own skin first, but that is not the U.S. With that said citizen are the first line of defense for themselves and families. This coming… Read more »

Considering that his perspective may be more internationally based than yours (or mine), I don’t find his reference to 3rd world LEO behavior offensive. The indisputable fact is that so-called law enforcement agencies in many countries are an existential threat to their own citizens. Thank God that we live in a society that does not countenance that behavior.
AND: Thanks for your service! I will always have your back.

The most important survival tactic I’ve learned in the military and as an LEO is the old tried and true “Cover and Concealment”. Unfortunately, there are too many instructors that just give this important survival tactic lip service. However, in a defensive shooting situation it should be the first thing you do. Yes, I know the old argument that we need to give the novice shooter maximum trigger time. Unfortunately, they will fight like they were trained. Well, pilgrim, nobody can outdraw a bad guy who already has his gun pointed at you. After watching the Houston PD’s Active Shooter… Read more »

FBI= FanBeltInsallers. They DO, conduct an excellent press conference however, and yes; Avoid, Deny, Defend, seems to be their current mantra and tactical philosophy. I have been retired for ten years now from law enforcement, and still have yet to see anything from “the Bureau” remotely resembling sound tactics for their street agents. It is a good thing, so many of the younger agents get to spend time with actual street officers and deputies on “task forces” to learn HOW to actually conduct appropriate Officer Safety and Survival for their own use. While, in the area in which I worked,… Read more »

I am surprised the author did not discuss the T-Box or more about the pelvic girdle when it comes to shot placement. Very good things to know when it comes to defensive shooting techniques.

The author is giving bad and dangerous advice regarding head shots.
Simply foolishness