12 Tips from a British Army Sniper 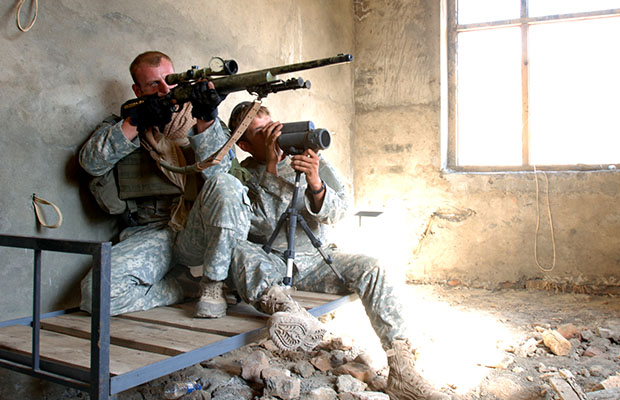 Editor’s Note: This post is another entry in the Prepper Writing Contest from Mike Turner. In this article, Mike shares some tips he received from a British Army Sniper that could be useful in a lot of different scenarios.


It’s the little things that make all the difference.

Working as a sniper isn’t all about the gun you have, how many hours on the range you have logged or the amount of targets you can hit. In the end it all comes down to being able to take the shot, hit your target and move to the next position without being found.

Here is some advice from a seasoned army sniper which will not only improve the way in which you work in action, but also help to broaden your approach to firearms, ballistics and the execution of military procedures on and off the grid.

1. Without a second, or spotter, to help set up targets and keep a watchful eye over the area in which you are operating, don’t go for a second shot from the same position. Doing so may only serve to compromise your position and alert the enemy to your whereabouts. How? The sound will echo, but the bullets trajectory will give the enemy and indication of your general direction. Also, depending on the typography of the land said echo may also give away your position.

2. Wet or cover the area on the ground in front of the rifle before firing. Upon firing the concussive force will kick up the dust and debris in front of the rifle. This may give away your position by giving any scouts or spotters a lingering indication of your location. Another option would be using leafy branches to cover the area provided it does not attract attention to the landscape. Taking a digital photograph before setting up your rifle may assist in the process of covering your tracks.

3. Keep your rounds at the same temperature as your surrounding environment. By doing so you will maximize the projectiles velocity. Do not insert a new round into a hot barrel if you can help it. The reason for this is that it may cause the lubricant on the bullet to boil and cause the powder to react differently. Hot air as we know is also thinner and less dense than cold or cool air. This should also be taken into account when setting up your shot.

4. Leave the site as you found it. Leaving indentations in the ground from your body or rifle’s bipod can help the enemy track your movements. Collect all shell casings and be cautious of disturbing the vegetation. A good way to cover your tracks is to spread leaves over the area you were positioned or to can a leafy branch and brush the area to remove or decrease the visibility of and depressions and indentations.

5. Learn your terrain. Getting into position and back into cover undetected is 80% of the job. Knowing how to judge soft and hard ground, where animals are nesting or hiding is vital. Once a shot is fired the enemy will be on watch. Even the best marksman can be let down by this error in judgement.

6. Your eyes are not everything. Snipers need to be in top physical condition. If you don’t have the physical stamina and insurance then don’t even pick up the rifle. Why? Snipers have to not only meet the physical requirements of their organization, but be extremely fast-moving and able to get themselves and their gear into difficult positions. Standard army, navy or air force daily fitness routines combined with a good cardio regiment will help you to achieve this.

7. Learn to judge distance, wind direction and speed without fancy gear. By practicing these skills by using the surrounding area before taking up position you better your chances if your gear is lost or damaged. Without an anemometer (wind speed meter) to measure wind speed you can use paracord, parts of your own clothing and tree bark to construct a basic anemometer.

8. Getting into the perfect shooting position can kill you. After firing you need to be able to move from your position undetected. If you can’t you are only giving the enemy more time to find you. A good piece of advice of this is to scout out and choose locations with multiple exit and entry points. This should maximize your success in moving into and out of position undetected.

9. Learn to make your own Ghillie suit. Camouflage is a vital part in a snipers job. To remain unseen and still mobile can be a great advantage. The suit can also, if built correctly, confuse dogs and mask a snipers scent. When constructing the suit use braided twine separated into single strands or burlap. NOTE: The Ghillie suit was invented by Scottish game keepers to sneak up on poachers.

10. When shooting from a structure setup your rifle a few meters back from the ledge or window to aid in your concealment. Many snipers can be betrayed by their rifles barrel being spotted or their muzzle flash. This also helps to keep you out of the line of sight of other threats.

11. If you are discovered and put in a survival situation you need to have a mental trigger already in place in order to maximize your chances of survival. This mental trigger is a visualization or thought in your mind that fortifies your will to survive. The thought of returning to a loved one perhaps or the thought of completing a goal in if that you have not yet attained.

12. SLLS ( Stop, Look, Listen, Smell) This is an army method that allows you to regain your focus when the stress of the mission or situation gets too much. When you become too stressed and feel your focus slipping, stop what you are doing, look, listen and smell the surrounding environment. Take as long as you need to regain your focus and return to the task at hand.

The digital camera idea is pretty solid. Another use for the IPHONE has been found.

Well done. There is not much worse than receiving intel that a target will be in a certain location at a certain time and then finding that intel is off by as much as 24 hours. Then having to lay in wait and your own bodily functions as well as critters until the shot presents itself.

Thanks for the comments guys.