Why do you need protection?

If you’re going to prepare for the worst case scenario, a bullet proof vest needs to be part of your plan. When SHTF, personal protection is really your number one priority– even food and water can wait if you’re not safe from the danger of other people.

Aside from getting a weapon to defend yourself, you’ll need something to defend yourself from other weapons. Since smart shooters will be aiming for your torso above all else, this is the first area you want to protect, and the best way to do so is with a body proof vest.

Of course no vest will protect against absolutely every weapon, so you will have some decisions to make. There are tradeoffs between level of ballistic protection and comfort/conceal-ability that need to be considered when choosing a bullet resistant vest. Generally, vests that protect from high caliber rounds are bulky, cumbersome and their presence is obvious. Covert bullet proof vests are far more concealable and comfortable to wear, but don’t provide optimal protection.

So what’s best for a survivalist? In almost all cases, you will want to procure covert, wearable body armor. Wearability and concealability are supremely important. You have no idea how long you’ll need to wear it, so preparing for long periods of time is wisest– there’s no telling when you’ll be safe enough to take it off.

Covert bullet proof vests are worn under clothing and have comfortable linings. Many are made with CoolMAX lining, which is designed to regulate your core temperature by letting excess heat out of the vest. For those who are irritated by synthetic fiber, cotton-based alternatives are also available. 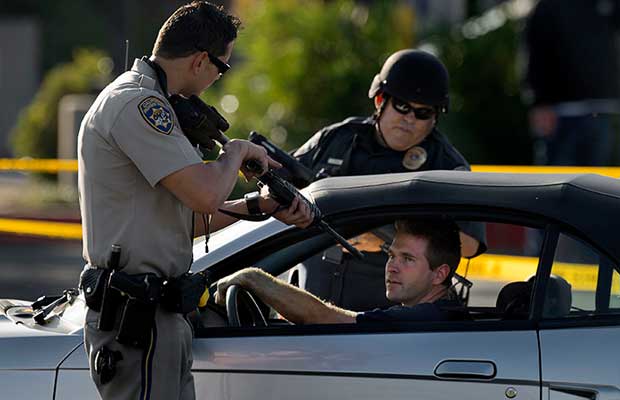 Soft body armor won’t stop rifle rounds but could be useful in many other scenarios.

Concealability is equally important. OPSEC for preppers is a must-know, and avoiding “indicators” — things that signal to people that you’re well prepared — is very important. If people know how well prepared you are, this makes you a clear target. If you’re seen parading around in an overt body proof vest, people will know that you have your act together, and likely have some other useful stuff to take.

For this reason, it’s recommended that you don’t get anything higher than level IIIa– upwards of that level, you’re getting into ceramic plates which can’t be concealed. One thing to consider is that the lower the level, the easier it is to conceal. Level IIIa soft armor may still “print”, or show its outline underneath clothing.

Of course sacrificing bulk also sacrifices protection. Level IIIa will protect against most common weapons and also minimize blunt force trauma, an often overlooked benefit. If you go lower than that, you’ll have some vulnerabilities, but on the other hand you’ll be more stealthy.

The only other thing to consider is the possibility of heavy weaponry. As you may already know, getting to know your neighborhood is a very important factor in planning. If it looks like you might actually be threatened by heavy weapons, get some small arms protective insert (SAPI) plates and store them in a safe place. Only put them on when you need them– no need to go traipsing around with an extra 15 pounds of weight for no reason.

Also consider getting vests rated for stab and spike protection. Blades and points are different than bullets, and bullet proof only vests will not protect against them. Overall, it’s key to know that no body armor will protect against everything. The best defense is preparation and staying calm in the face of danger. Even then, having the right bullet proof vest may save your life.

This IS a topic that i believe most serious people who like to be prepared should be considering. My wife and I have been saving for both concealed IIIa vests as well as the exterior (non-covert) models. Yes, they are both available to non-felons in most states. We believe that when we are on our “road trips” these vest could come in handy for “civil unrest: scenarios in areas in which we are not familiar, plus, the vests will at least slow down some rifle rounds fired at the vehicle by the local thug population. While we cannot afford to… Read more »

I agree body armor has a place. It is probably up to each person to figure out where that fits in priority order. I happen to have one of each but ideally I would have at a minimum soft body armor for my whole family.

I know people who could make you a suit of Maximilien or High Gothic plate armor from AP500. Sure you would be practically invulnerable to most attacks, but can you move and fight for very long in over 100lbs of armor?

I was thinking about this and thought that layering armor might be the best strategy. I was thinking soft IIIa vest for early on in a SHTF event. If society breaks down adding a plate carrier with SAPI or AP500 inserts.

Pat Henry
Reply to  Thomas Paine in the butt

That’s pretty much where I have landed on this Thomas. Soft body armor for the start. Level IV when all hell breaks loose.

I have a PC with Level IV plates and trauma inserts. Great to have if we break out the long guns for daily use. Who made your PC Pat?

Mine is Condor and it works good for my level IV plates. I don’t have the trauma inserts though. The condor has plenty of MOLLE hooks for all the gear I want to carry and room for a whole lot more.

Andrew Smith
Reply to  Thomas Paine in the butt

This is a great idea to layer armor. Certain materials work well with each other. I will test this personally at the range and see how it fares

Rayan Alam
Reply to  Thomas Paine in the butt

Thomas when it comes to wearing a massive body armor suit. My best suggestion is to only wear on the defence or offense if you have good transportation never for travel though

Although I haven’t bought it yet(its too expensive to buy immediately i’d only get it if i saw something happening) right now i only own a light IIIA vest with a little plating. I got 2 loadouts that I will buy if I start to see a likely disaster incoming(dont want to just waste money otherwise). One is for travelling a camoflauged Kevlar vest and a helmet. My assault gear would be solely for defence or assault(obviously :P) is a bulletproof vest with plating, trauma padding, full out shoulder throat coller and groin protection. Also in assault is a helmet… Read more »

What is the photo of the CHP officer pointing his rifle at a driver from?

That is from a couple of years ago and there is some dispute over the technical aspects of the photo (was the officer actually pointing the weapon at the guy or not). The original source of the photo is hard to find, but a caption I was able to grab from one site says the image: “A California Highway Patrol officer and another emergency responder stop a vehicle at a checkpoint near the neighborhood where a federal immigration officer was shot and three local police officers were wounded during a violent confrontation with a suspect in the Sacramento suburb of… Read more »

I personally own several vests and chest rigs with ballistics qualities, and I found the following helpful. For concealibility I use a DAPS lla soft armor plate and added a layer of aluminum in front of it for knife protection. It covers the chest area, is unnoticeable, and only weighs half a pound. For bigger problems, I own a condor tactical MOPC vest with AR500 ceramic plates in the front back and side pockets. This plate carrier is bulky and with mag pouches and gear attached weighs in at a woping 45lbs- good for ample coverage but bad if you… Read more »

Hi All. Enjoyed the article and comments, thanks. I’m still in the research stage, but hopefully getting close. Any thoughts on a plate carrier (with a long life?) vs. traditional kevlar that only last x amount of time? I’ve seen kevlar vests for sale at gun shows that are past their expiration date and have stayed away. Thanks in advance!

For those of you thinking about steel armor plates in the event of WROL/SHTF here is a GREAT video channel for you guys to check out. (Note I have ZERO affiliation with this channel)