Editor’s Note: This article was generously contributed by Keith Pounds. You can read more articles from Keith on the Prepper Journal. The concept Keith is discussing below has so many parallels in our present society that you may feel are left unstated. I will leave it to the reader to draw their own conclusions from Keith’s excellent article. The State Guard could very well have a much more prominent role in our future.

“It appears foolhardy to wait until a national emergency is upon us and the National Guard is ordered into the Federal service before at least laying the groundwork for a State defense force” – MG Ellard A. Walsh, president, National Guard Association of the United States, prepared statement to the Senate Committee on Armed Services, July 28, 1955

Across the country, the American populous has become increasingly concerned over how they can protect their families and personal property in the event of a Hurricane Katrina-type natural disaster or man-made terrorists attacks on schools, shopping malls, restaurants, sporting events and any number of other soft or hard targets.

These tell the story that many Americans don’t want to rely on bureaucratic agencies hundreds of miles way to come rescue them in times of disaster.

State Guards (also known as State Defense Forces) – in helping to augment the National Guard and state emergency management agencies, have left not only a fascinating footprint in American history, they are an integral force multiplier for today’s homeland security efforts.

Much has been written about the 18th century “state militias” that played noteworthy – if not deciding – roles in the outcome of America’s defeat of the British Army.

Yet little is known about how prominent these citizen patriots have been in the present day and – like their progenitors – volunteer and train most often without pay to defend and protect their homes and local communities.

As America entered World War I, some 300,000 National Guard members were called to federal service – most to fight overseas. This left many states void of one of the most critical means of responding to local/state disasters.

In the Dec. 2004 edition of the Joint Center for Operational Analysis Journal – and republished in Dec. 2009 by the U.S. Army Combined Arms Center, Center for Army Lessons Learned – COL (Ret) John R. Brinkerhoff wrote specifically about how State Guards stepped-in to fill critical gaps during World War I.

He noted that just months after Congress enacted the Home Defense Act (June 1917), there were State Guard units in 42 states with an aggregate strength of 100,000.

However, once the war was over, Congress withdrew authorization for these units.

A 2010 Heritage Foundation survey, “The 21st-century militia: State defense forces and homeland security,” highlighted that leading up to World War II  Congress similarly authorized the formation of State Guards, resulting in a total enrollment of some 150,000 members.

While Congress again withdrew this authorization after the war, State Guards were reinstated in 1950 during hostilities in Korea.

Finally, in 1955, permanent authorization was passed, establishing the State Guards we see in existence today.

By 1969, the Gates Commission recommended what was called the “Total Force Concept,” to replace conscription – better known as “the draft” – with the all-volunteer military.

As the Total Force Concept increased the likelihood of Reserve and National Guard units being called to federal duty, many policy makers realized the importance of State Guards in providing security and emergency response back home.

THE GLOBAL WAR ON TERROR 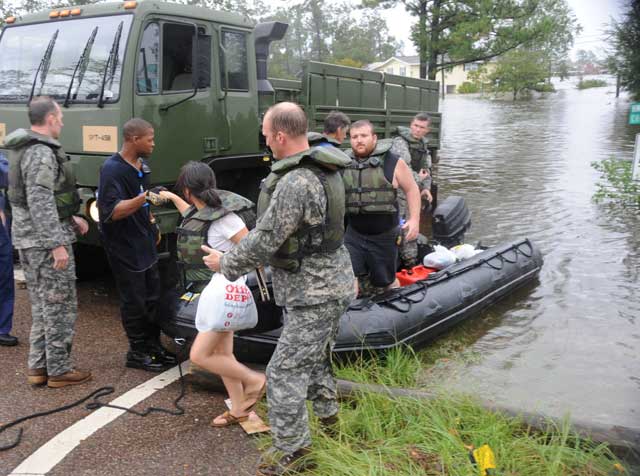 State Guard forces can assist locally in a disaster well before any Federal response could be coordinated.

For many years, State Guards stood ready to provide protection for armories, or as “Honor Guards” for local events or military funerals, when National Guard personnel were unavailable.

As National Guard units were called to serve overseas in the Global War on Terror, State Guards were once again realized as an important force multiplier in state emergency management.

In most states, after the 9/11 attacks, State Guard mission sets increased their focus on local emergency response, disaster recovery, and critical infrastructure protection.

Though National Guard units have returned home with the draw-down of operations in Iraq and Afghanistan, continuing conflicts and threats from across the globe – including expanding terrorist threats – prove that things are in no sense “back to normal.”

A Department of Defense report entitled, “Evaluation of Department of Defense Interaction with State Defense forces” by the U.S. Deputy Inspector General, Special Plans and Operations, found that in April 2014, 23 states and Puerto Rico maintained State Guards with an estimated strength of 14,000.

Just months after this report, Arizona became the 25th state or territory to organize a State Guard.

While state governors can call on federal aid and support, trained State Guard personnel – already stationed within the state – can respond much more quickly than federal resources, which can be bureaucratically slow to respond. 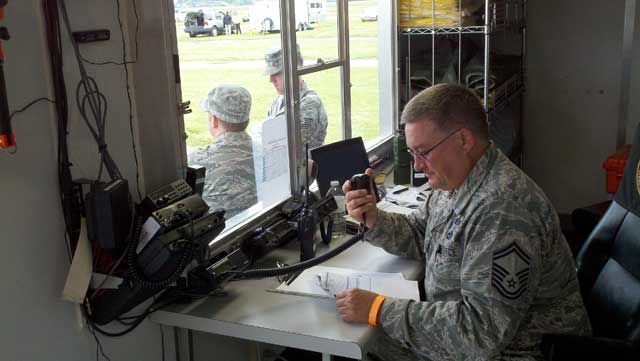 State Guard units can bring communication options into an area affected by disaster.

Statewide catastrophes – whether natural or man-made – will require personnel trained in emergency management response and recovery, including roadway evacuation support, the logistics of food distribution and emergency shelters, local security, damage assessment, and even urban, wilderness and water search and rescue.

The 2010 Heritage Foundation survey – purportedly the first attempt by any organization to conduct a comprehensive survey of the nation’s State Guards – found that State Guard members from at least eight states responded to assist with Katrina recovery efforts.

A 2012 Heritage Foundation report entitled, “Why more states should establish state defense forces,” found that Katrina wiped out some 2,000 cell phone towers and destroyed both land line and 911 services.

The 2010 Heritage survey further found that the average age of a State Guard member is 42 years.

The 2005, “A guide for establishing a state defense force with a homeland security mission,” for the John F. Kennedy School of Government at Harvard University, attributed the seemingly advanced age of members to a large number of former or retired members of the armed forces.

As it noted, many veterans serve in State Guards because of, “the comfort level obtained from being among uniformed persons once again, or because of having served the military well and received much in return wish to ‘repay’ that emotional ‘debt’ through continued community service…”

Still, while many younger State Guard members (ages 17-30) may have chosen not to join the armed forces, the State Guard satisfies the desires of those who feel called to serve their state or local community.

As State Guards are designed for state disaster “response and recovery” rather than “combat,” they tend to have less stringent physical fitness requirements than federal armed forces. This often allows those with minor medical issues to serve in many important capacities.

Still, many units may desire at least some young, more physically fit members to serve on quick responding search and rescue or damage assessment teams.

It is reasonable to expect State Guards to rely increasingly on both seasoned veterans as well as young, eager, more physically fit members.

With ongoing – and growing – concerns over budget cuts and overall fiscal responsibilities at the local, state and federal levels, the increased reliance of low-cost, quick-responding State Guard’s present as a no-brainier.

In recognizing the unpredictably volatile potential of both natural and man-made disasters, we do a disservice to our communities if we do not stand ready with highly trained emergency management volunteers who can place “boots on the ground” in a matter of hours, rather than days or weeks.

Many of us know all too well that the heart of emergency response is “local.” We understand the importance of a ready, local preparedness in the event of a catastrophic event. No one wants to see members of their own community stranded on rooftops with no one to come rescue them for days.

For anyone concerned about his or her own family safety, the safety of their community, those looking into “prepping,” or those simply wanting to give aid and assistance to their local community, when local resources become overwhelmed, perhaps one of the most efficient responses includes our own State Guards.

About the author: Keith Pounds is a former hospital corpsman (medic) having served in the U.S. Navy and with the Marines. In 2012, he was designated as an Honorary Green Beret by the S.C. Chapter of the Special Forces Association. He holds an MBA with a concentration in organizational psychology and is the president and CEO of Countercon, a Columbia, S.C.-based counter-terrorism consulting company, and serves as a captain in the S.C. State Guard.

Interesting article Doc. But I’m more concerned with a state guard which will be capable of defending the constitution from all enemies both foreign and domestic rather than the “unorganized militia” of able bodied people to fill sand bags and deliver food, blankets, and potable water.

Generally yes, I believe they are. They’re supposed to be an auxiliary of extra bodies to do manual labor, man stations, etc that fall under the command of each State’s branch of the National Guard, their commander (usually the Governor or Lt. Governor) or the feudal military during non-military actions or during military actions when posse comitatus is ignored. What is really needed are armed militias independent of the feudal government, loyal to each state and the Constitution of the several states; able to serve in these disaster relief roles as well as to serve as a breakwater against the… Read more »

What are the advantages of a prepper being involved in a State Guard? How can this association be leveraged by the individual in time of disaster?

Any chance there is a reference link to the various state guards?

If they roll up under the Army or Air Guards, what happens when the National Guard for that state is federalized?

The State Guard is all volunteer, so if you want out, you just quit. Their main goal is assistance to the assistance, most likely just handing out sandbags. Not really worth it, I would form a small community of like minded individual instead.

In the state I (might) reside in, the SDF was being set up and trained to be constables with police officer powers during times of emergencies. The beef I had with the SDF, was the C&C was filled with retired police officers, with a small minority of former military. The organization was pretty much a reserve military police force. On the flip side, they offer LOTS of FREE training. Once a member, most are allowed to use the army’s correspondence schools. Something to think about. I like the concept, but I disagree with who is running it and would they… Read more »

I was a member of the ga defense force could I be reactivated and start helping right away . I still have uniforms the one before the latest one. I’m in Newnan ga 4044725860