The Necessity of Liquidity in an Increasingly Cashless Society 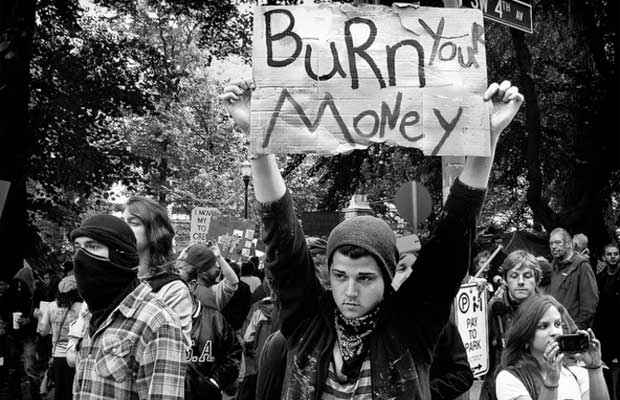 I was taught all the values of saving money but it wasn’t exactly modeled for me. Consequently, I had to overcome some hurdles as I grew up learning to budget, and more importantly, to stick to it (I still trip from time to time). My wife and I are now teaching our children about the value of their dollars and I am proud to say they are more miserly than I at their age. When they ask for a toy or a special treat and we feel it is appropriate we tell them they can have it if they pay with their own money. Our daughter is better at this than our son, but they look at their piggy banks, count the money, and more often than not are reluctant to part with their treasure for something fleeting. Financial expert Dave Ramsey says,

“There’s something psychological about spending cash that hurts more than swiping a piece of plastic. If spending cash whenever possible can become a habit, you’ll be less likely to over-spend or buy on impulse.”

So when was the last time you counted a wad of cash and had to make some decisions as to how much went where? You might do this regularly if you own a small business, but if you’re like the majority of debit card-swiping, electronic bits and bytes-spending, you probably haven’t in a very long time.

The benefits of liquidity

As it applies to you and me, liquidity is the amount of spendable cash on-hand such as in a piggy bank or hidden stash or cash that is readily accessible through ATM/bank withdrawal, or the quick sale of belongings. To most preppers cash on-hand is obviously the better choice for your money because you physically have it. Does the adage “a bird in the hand is worth two in the bush” sound familiar? The preppers who are involved in collecting precious metals (I am not one of them) will tell you quite correctly “if you don’t hold it, you don’t own it” (link includes good warning on dangers of holding valuables). Liquidity doesn’t have to be money as we know it. In a SHTF grid down scenario money will be whatever gets you something you want or need à la bartering. But for now, greenbacks and coins are the money we use and they’re still legal tender everywhere so having some on-hand mitigates your risk of being unable to buy what you need. It’s the same idea behind why we store any supply – we know we will need it later.

So why don’t we keep money accessible?

Despite the common sense and relative ease of having accessible supplies of needed items millions of Americans do not prepare in even the slightest way. We have discussed the concept of normalcy bias as a large reason behind failing to prep. When it comes to money, our society revolves around instant gratification and “efficiency” so we use credit and debit cards, electronic fund transfers, and online shopping – all made possible by a digital fiat currency system not backed by anything, which further removes us from cash as the marketplace ceases to resemble anything from even 15 years ago. In 2015, for many Americans, liquidity is limited to what sits in the bank account between bi-weekly direct deposits that isn’t automatically withdrawn due to electronic bill payments.

The following examples are from my own life. They only involve human error by one or two people yet significantly impacted my family negatively. Imagine a scenario where the grid goes down or the government seizes digital wealth and you have a problem hundreds of millions of times worse.

Moral: People are morons and corporations don’t give a damn about you. Cash payments by us instead of electronic payments or checks in the snail mail by third parties would have eliminated this problem from happening. Emergency fund money in the bank is a good safety net.

We are aware that the automatic deposits for payday have not transferred to individual banks. The Finance Department is working on it and as soon as it is resolved we will let you know. We apologize for any inconvenience.

I got in touch with my wife at her job and we exchanged some choice words. An hour or two later I checked my email again and saw this gem:

Due to my error, the direct deposit file was not sent to the bank in time to transfer funds into your accounts today. I apologize greatly for this error and hope you understand.

The file has been submitted for transfer by Monday. If you have any questions or concerns about this delay in payment, please feel free to contact me and I will work with our bank to try and get your funds to you sooner.

Fortunately, my wife works and works for a different company. We were spared the troubles so many of my co-workers faced, especially those who are single or whose spouses also worked for the city.

Moral: Having a system where one employee is capable of affecting over a thousand families to the tune of over $750,000.00 is insane. Payment in cash would have eliminated this problem. Emergency fund money in the bank is a good safety net.

Preppers should not only have padding in their bank accounts but should keep emergency cash in a safe location. As long as it’s the legal tender being accepted it is valuable. How will you pay when the ATMs shut down, or your card is stolen/compromised, or the banks are closed? Cash is king, make it part of your prepping plan.

Soon to be America’s official currency – unless BHO is stopped.

Everyone who is not debt free with a six month supply of cash needs to check out Dave Ramsey. Pay off the debt, reduce expenses, create an emergency fund, build up savings. We had to replace our washing machine, clothes dryer and refrigerator all within about 5 weeks of each other and were able to pay cash for all of them. Before taking the Dave Ramsey course through our church we would have had to put it all on the credit card.