Could the Survival Bike be your Bug Out Vehicle of Choice? 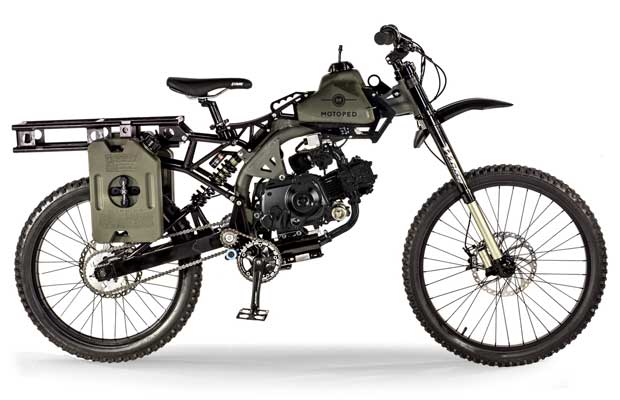 What is the Survival Bike? Is it just a souped-up Mountain Bike that has been painted OD green? No, the Survival Bike from MotoPed is actually a Moped. Remember when mopeds were all the rage for people who had too much money for a bike and didn’t really want to pedal? I thought they were a thing of the past replaced by the obnoxious scooters that I see more and more everywhere. The scooters are not obnoxious because I am against saving gas or anything like that; I would just like them to keep up with the flow of traffic. There are few things less annoying than getting behind some 300-pound guy on the back of a dinky scooter going up a hill with his Hitler helmet on. But I digress…

The Survival bike has a motor attached to a really beefy bicycle. You can pedal just like a regular bike, or you can use one of two options of engine to power you along at a top speed of 24 MPH. That sure beats the heck out of walking if you are forced to bug out and with the two included RotopaX 1 Gallon fuel tanks, your range is potentially 400 to 500 miles according to the MotoPed site.

The rear deck has a mounting rack that will hold up to 50 lbs and while that isn’t going to be enough to pack your entire house of survival supplies, it could take a nicely equipped bug out bag or a small child.

Is a Survival Bike a good option for bugging out?

I recently wrote a post that received a lot of interest in the comments section called “10 reasons why you do not want to bug out” where I basically said that for most scenarios, most people would be better off staying at home as opposed to bugging out. I also said that the circumstances of your life, the disaster or threat you are facing and your personal situation would dictate whether anything like this was possible. If you found yourself unable to stay in your home shelter, bugging out may become necessary and having a means of transportation, while there are some drawbacks, does have it’s advantages. 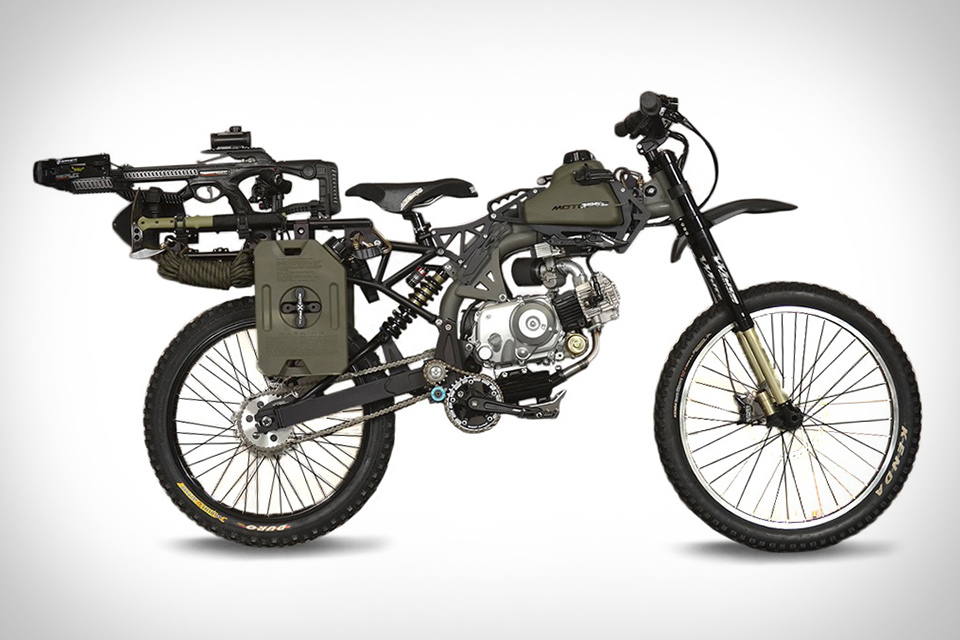 For a bug out vehicle, any bicycle type of device would not be my first choice for the following reasons.

Now, there are some advantages to bikes and I can see conditions where a moped like this would be very useful.

I think the concept is brilliant and they even have an upcoming Black Ops model (pictured above) that adds a lot of the gear you are looking for to the package, including a crossbow, which is in keeping with the stealth theme. Is something like the Survival Bike right for you? With a price tag of $3,349 + $325 for shipping, it isn’t for me. What do you think?

Cute, but no. For that price I’d get a good higher powered dirt bike. I had a 50cc moped as a kid, 0 to 25 mph in about 5 minutes isn’t gonna save your from the zombies. This is for somebody with too much money.

We do not live in TV land. This bike is nothing more than an expensive toy. It may carry an AK and 1000 rounds but one cannot pedal drive and shoot.

My brother and I used to joust on bicycles.

We armored up with football and hockey pads and helmets and rode towards each other with big cardboard tubes we could occasionally find. Getting unseated was no fun, but the game in general was.

Perhaps this needs to come with a spear instead? 😉

That’s a lot of pedal pushin’.

I think this is more a toy than anything else.

I’ve thought about the idea of using motorcycles to bug out often. As an avid dirtbiker, I have a minor (read: huge) investment in dirtbikes, and the idea of tying our weekend hobby ‘tools’ into our bug-out plan isn’t so far fetched. As for this particular option, I couldn’t see it myself. I believe a motorcycle can be an extremely effective means of getting around a particular area (scouting, scavenging, etc..), but am not sure about an extremely high end moped as anything more than option B. Specifics matter, and without engine specs, most here are assuming thats a very… Read more »

I had to check it out. The product description is hilarious and I am amused by the black ops model including a tomahawk and crossbow. The cool factor is pretty high but the survival value is highly circumstantial and not practical for about 95% of people. It probably won’t be my next gear purchase unless I win the lottery, strike oil in my backyard, or am suddenly crowned the king of England.

Greetings: From my chair, the MoPed is DOA in the places I normally ride and hunt… and if you need to carry 100-150 pounds in gear, food or a combo thereof, the MoPed is a non-starter. So that leaves a couple options in my book, both of which I have used and both have advantages and disadvantages: Honda makes great lightweight trail motorcycles. The Trail 90 and Trail 110 have high-low range gearing and can carry a 200 lb. man plus a rider (wife of 125 lbs) plus 50 pounds of supplies… been there, done that down on the Baja.… Read more »

This topic and conversation got me thinking of what might make a viable 2-wheel transport. Expensive mopeds seem ridiculous in light of what a person would want to carry vs off-paved road movement when the golden horde takes foot. The Trail 90/110 are indeed viable bumblers, but lack any kind of accelleration to get away from danger…especially under a load. The Grandparents used them for hunting, and while they are nearly bulletproof, the lack of stopping power, and suspension travel makes it similar to riding a hard-tail in the woods. I’d consider a mid 80s-turn of the century Honda XR… Read more »

Is there something cheaper? A bike/mo-ped? Tell me 🙂

Most bikes would be definitely cheaper, but you lose the assistance of that motor. Motorcycles could be cheaper too, but lack the quiet ability to pedal. Either way you are looking at trade offs.

…if you can stay at home..god, but if you can, and is a massive disaster…youwont be able to drive a car, maybe MAYBE a 4×4 could be more usefull but still…no bro…just, no. an hybrid between a bike and a motocross (sound expensive but you get the idea, doenst has to be at all) can pass trough almost anything, and if you cant find gas, just move your fucking feets! a car will NOT provide you any defende against bullets, be realistici…and shelter..if you cant sleep without a car, youre just fucked up. besides all those things…you CAN just put… Read more »

I am years late to the discussion but I think a lot has been overlooked here. Ignoring the price point of this particular bike the practicality of it is far more survivable then most here give it credit for…mainly because of: 1) Takes about 10-minutes to attach a bike cargo trailer…now you have 80-pounds of extra gear allowance. 2) A 50cc engine with 3-gallons of gas will haul that 80-pounds of extra gear and yourself over 200-miles of virtually any terrain in 10-hours. That’s not something you’re doing with a bike or motorcycle. 3) Put on even some mediocre armored… Read more »

I recall being chased once while I was on a small motorbike. I easily evaded those in a car chasing me by going places a car couldn’t go. However, I wouldn’t think of bugging out with only 50 pounds of survival gear. Lacking wilderness survival skills, I wouldn’t last more than a few days. In the event that roads are clogged, and I need to travel off-road, I have an option that beats walking. I have a garden tractor, and a trailer. My garden tractor is slow, but I can go off-road, and carry quite a bit in the trailer.… Read more »

Nice bike, but NO.

I could see this being a scout vehicle for “The Scrambulance”, a little thing I picked up at an auction last year… and have been dumping ALL my time and money into. I figure it’ll be all finished in another couple of months….complete with solar, 2k inverter, 4 in-line 6 volt house batteries, cassette toilet, shower, kitchen, and more storage than I can shake a stick at.

A dedicated vehicle with that capacity would be much better Mike! Maybe you could just hitch this on the back for your runs into town. Put your girl on the handlebars and go for a Butch and Sundance ride.