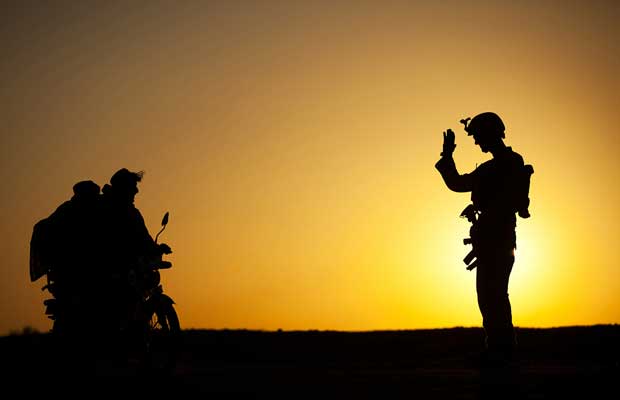 Editor’s Note: This article was generously donated by frequent contributor, Rich Bryant. Rich discusses security topics that could need to be employed by preppers in a TEOTWAWKI scenario if controlling access to your location is warranted for security and safety in a world where the traditional authorities are no longer able. This article compliments our series on Thinking of your neighborhood from a tactical perspective and offers plenty of common sense tips for establishing roadblocks should they become necessary in your neighborhood or retreat location. You can also read other articles from Rich on the Prepper Journal.

If you happen to have worked on a military base in the past, I’m sure you’ve encountered guards standing at the guardhouse routinely waving traffic through the gate – maybe stopping the occasional vehicle to ask a question or two before waving them through. Such a relaxed approach may be adequate during peacetime, however post-disaster these procedures will be wholly inadequate. This article will describe how small communities can establish and manage effective post-disaster roadblocks.

With the recent unrest in Ferguson, MO we’ve actually had a rather ugly preview of coming attractions regarding the need to control and monitor the movement of people. The image of a large gang of criminals, intent on looting, migrating to a neighboring community and shooting their way into a locked store, is an image that should be forever branded into the consciousness of every prepper. This is precisely the reason that the movement of people will need to be controlled, and it’s going to require more than a smiling face and a wave of the hand.

In the wake of a major disaster, those living in small to mid-sized communities will be faced with the challenge of quickly reorganizing to cope with new and immediate concerns. One critical need will be to “control the perimeter”, which will involve establishing security checkpoints to control and monitor comings and goings. Without such controls the risk of disease and lawlessness could threaten the community’s very existence.

While, at first blush, it may seem trivial to set up a roadblock (“Hey, you two guys go down the road and check anybody passing through town!”), during times of disaster an effective roadblock requires more serious consideration.

As with many aspects of life, when establishing a roadblock “location is everything”, and factors that should help to identify the best location for a roadblock include distance from population centers, availability of sufficient space to meet the roadblock’s missions, ability to be defended and potential for line-of-sight communications.

Ideally a roadblock should be a minimum of 0.75 miles (1.2 kilometers) from any dense population centers. This distance corresponds roughly to the range of a high-powered rifle. In other words, a defensive perimeter is much less useful to a community if an adversary can effectively shoot at members of the community from outside the defended perimeter (a roadblock should, if possible, be that distance from any location where a member of the community lives or works).

Military snipers have been known to, on rare occasions, hit targets at distances approaching 1.5 miles. Obviously a bit larger safe zone should be considered if one anticipates adversaries having military sniper training.

Roadblocks are staffed by people, and in the long term people require supporting infrastructure. Such infrastructure potentially includes provisions for the sanitary elimination of human waste, protection from the weather, storage of supplies and space to be used to detain travelers without blocking traffic. Any location considered for a permanent or long-term roadblock should address these real-world needs.

The security of those staffing a roadblock should be a primary concern when selecting its location. It is inevitable that there will eventually be security incidents at any roadblock, and the personnel there should be able to ward off any anticipated attack until reinforcements can arrive. The availability of hard and soft cover should be considered, as well as local geography (with regard to both offense and defense). In some situations it may be important to have a concealed shooting position located nearby to provide supporting fire in the event of the most serious situations.

Yet another important factor to consider when selecting the location of a roadblock is the availability of line-of-sight communication to the community. This can be important in case other more conventional means of communication become unavailable. For example, flags might be flown to request reinforcements or to visually indicate other abnormal situations. In some cases it may be necessary for a central headquarters within the community to have a line-of-sight to the roadblock, while in other cases it may be sufficient for the roadblock to be within sight of any population center (from which communication might be relayed to the central headquarters).

In addition to the factors already mentioned, a roadblock should be established at a location that is a natural traffic bottleneck. Otherwise it is possible that intruders could simply bypass the roadblock.

Without certain basic features necessary to meet the needs of those who will be staffing it, the ability of a permanent or long-term roadblock to accomplish its mission will be significantly degraded. The roadblock station should feature:

Flags of various colors should be available to, at a minimum, signify abnormal security conditions (perhaps yellow and red), requests for unscheduled personnel rotation and requests for medical assistance.

In addition to the equipment listed above, those who staff the roadblock (and anyone providing them covering fire) should carry weapons that are appropriate to their role. Holstered handguns, along with spare magazines and a good supply of ammunition, are probably a best fit for those staffing the roadblock; with a rifle close at hand in the guard shack. The advantage of holstered handguns is that they leave hands free for signaling and conducting searches.

Radio or other forms of electronic communication between the roadblock, a central headquarters and/or other roadblocks or other security personnel can obviously also fill a vital role. If non-secure radio communications are utilized then standard code words (similar to the ’10 codes’ used today by law enforcement personnel) should be employed to augment communications security (‘COMSEC’).

An alternative to radio communications is the use of military grade ‘field telephones’. Such phones provide the advantage of increased COMSEC. Military-model phones worth consideration are the TA-1, the EE-8 and the TA-312 field telephones, which have been used by the US military throughout the twentieth century. The TA-1 offers a range of up to four miles and requires no power source (it is voice-powered). The EE-8 offers a range of up to 17 miles, but requires batteries. The TA-312 has a range of up to twenty-two miles under dry conditions, and features a built-in hand generator so that batteries are not necessary for operation.

Small military switchboard devices can be installed at the central headquarters to enable point-to-point telephone communications between multiple locations. There would also be a need to obtain sufficient lengths of telephone wire to interconnect the desired stations.

As has already been mentioned, flags and sirens can fill an important role by providing a means of communicating certainly critical conditions to the entire community.

It is typical to have a roadblock staffed by a minimum of three individuals; two members of the team typically process foot traffic and vehicles through the roadblock in accordance with standing orders, while the third oversees the operation from the guard shack and is ready to react appropriately if an incident develops. Occasionally the duties associated with manning the roadblock can be physically demanding (for example, if the station comes under attack), so it is important that all team members be physically fit.

Under normal circumstances teams should work in shifts and rotate on and off the roadblock in accordance with a pre-established schedule. As already suggested, in times of heightened alert it may also be prudent to employ a concealed sniper to provide support on an as-needed basis.

Roadblocks can be excellent (and cost-effective) sources of critical intelligence information about potential future security threats to the community. Question and answer sessions conducted with passers-by can provide a wealth of information which can often be corroborated by multiple independent observers. When collecting information from travelers about potential adversaries they may have observed, the following ‘SALUTE’ questions should be remembered:

The use of roadblocks to control and monitor the flow of inbound and outbound traffic (foot traffic and otherwise) is important to the community from many perspectives. In addition to strengthening the defense of the community, it can be a valuable source of strategic intelligence. The presence of roadblocks also increases the community’s sense of security and well-being, which can itself translate into increased productivity and economic activity.

To paraphrase the great poet Robert Frost who once proclaimed that “Good Fences Make Good Neighbors” it can be said that “Good Roadblocks Make For Secure Survival Communities”.

About the Author: Richard Bryant is author of the preparedness book “When There is No FEMA – Survival for Normal People in (Very) Abnormal Times” and a long-time preparedness group organizer in Central Florida. He has recently relocated permanently to his disaster retreat in rural West Tennessee. The first 60 pages of his book are available for review and download at http://nofema.com.

Thanks for a very informative article; it goes in my prep binder.

Related to roadblocks: to stop the Golden Horde from entering your small town, I think the authorities should consider the effect of destroying critical bridges (like across rivers) along the invasion route. It could stop all but the most determined attackers, but it might also remove an escape and trade route.

BTW, I saw this on “Jericho”, a thought-provoking if melodramatic series on the effects of nuclear bombs and EMPs on the US.

Excellent point bobcat. You might even go so far as to have plans for blowing the bridge. At a minimum, felled trees, hesco, or jersey barriers need to be employed to corral drivers into a zig-zag pattern.

Just remember those “road blocks will be manned by everyone from real authorities to Highway Robbers.
One may rip you off and let you pass and the other may just kill you and take everything while you become that nights dinner.
Travel at your own risk.

Good article and useful tips. I do think the use of the Ferguson protests as an example of post-disaster gangs and looting is a little exaggerated. These were unarmed protesters who also engaged in property destruction and some looting, nothing like what could be expected in a post-disaster scenario where there could be armed and organized gangs including former military personnel intent on overtaking your position.