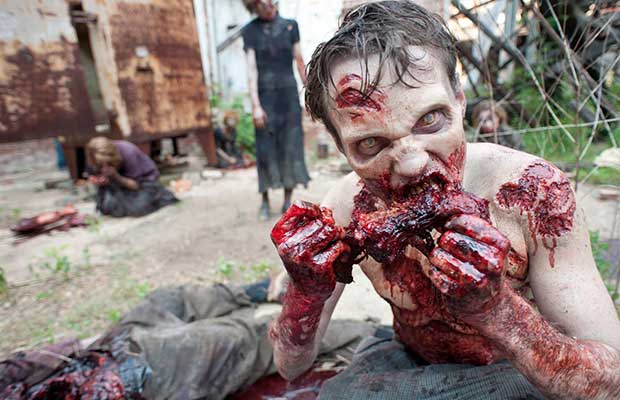 Editors Note: The following article was generously donated by Michael Martin and covers a polarizing subject for some of our readers. There are two sides to zombies when it comes to how the threat posed by the undead is seen in the Prepper community. There are some who believe zombies are no more real than Big Foot and think that to worry about a zombie apocalypse, much less entertain the reality of zombies in the first place, is foolish. There are others that genuinely believe in the potential of some form of virus outbreak actually causing the type of zombie behavior we have seen in movies and TV for years. Real or not, convincing you one way or the other isn’t the intent of this post. I think if nothing else, zombies are a metaphor for a lot of potential behavior post-apocalypse.

However, it is worth mentioning that the military has been caught training to mow down “zombies”, the Marines have their own Zombie Deployment Guide and even the CDC has tried using zombies to reach people with the message of preparedness. Have you ever stopped to wonder why we are so inundated with zombie messages in our culture recently? Is all this just having fun with the message or more subtle predictive programing? You be the judge.

Hi there! When we talk about emergency preparedness and survival, most would often think about the zombie apocalypse scenario. It’s probably one of the most entertaining reasons why some choose to prepare and I guess we owe it all to Hollywood for raising this kind of awareness in some way. But are we just crazy to think that a zombie outbreak would somehow happen in the near future? What do we really know about these creatures? Are they for real or just a product of our playful imagination? In this guide, we are going to explore all the things we think we know about zombies. This article is created so we can set apart the fact from the myth and somehow eliminate the idea that zombies are just the same creatures that we often see in movies and nothing more.

So What’s The Real Deal With The Living Dead:

Are zombies for real? Is there a possibility that they might wipe out the entire human population like we usually see in the movies? Let us look into this list and learn the things we really need to know about zombies and make use of the things we learn here to improve our skills in survival preparedness: 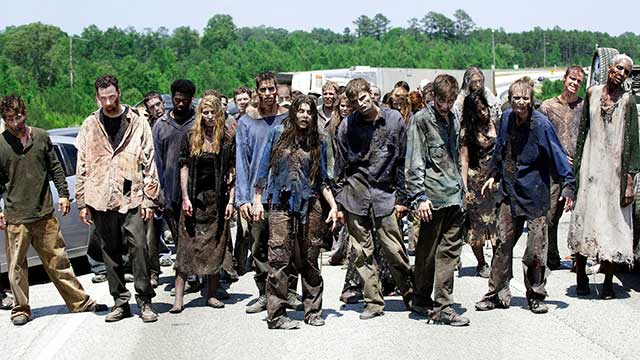 You’ll know they’re Zombies by the way they are shuffling towards you.

Zombies walk in a lethargic manner

(Fact and Myth) – One of the most common depictions of zombies in the movies is the way they walk. Old Hollywood versions care to show a slower version as these creatures walk sluggishly with their hands raised as they march towards their victim while recent representations tend to show a faster and quicker creature. Most experts agree that this so called ‘zombie walk’ can be a fact and myth at the same time as recently infected humans are perceived to be violent and agile, but will eventually move slowly as their condition continues to deteriorate. As for that raising of hands thing, I guess the directors just add this detail to give a more scary effect as they approach their prey to be eaten.

(Myth but plausible) – One thing that bothers me whenever I watch zombie movies is the way they attack in groups. How could these creatures immediately develop a collective mind after being infected and how can they organize such an attack if they are not able to establish proper communication? We can see this as a myth in a way, but we can also expect the possibility of organized group assault if this apocalyptic scenario will happen in the near future.

Zombies have a thing for human flesh

(Myth) – While movies often show zombies to have that distinct taste in human meat, the likeliness of an infected human becoming a cannibal is not going to happen immediately. There might be factors to consider such as the mental state of the infected person, the scarcity of survival food supplies (which will force them to cannibalize), and etc. But when you talk of an infected person developing a fetish for human flesh, I think with can disclose this possibility as a myth until further evidence will disprove this claim. 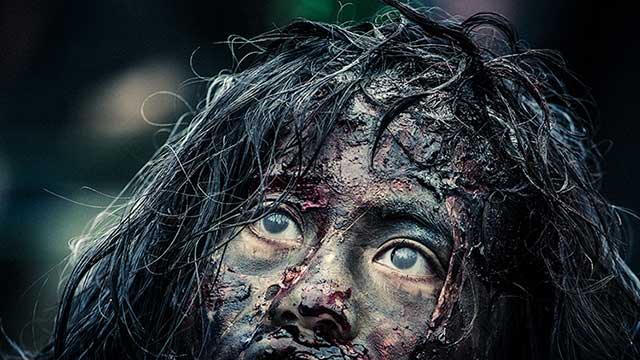 All zombies think about is eating your flesh.

Zombies can still survive after being literally torn apart

(Myth) – Another thing that kinda bothers me is that zombie body parts will keep on attacking even after being dismembered (ex. the hand is still crawling towards the victim). This is absolutely not true since a body part cannot function on its own. It needs the brain to be signaled to move. Movies are just making this up to add an element of suspense to the scene.

Zombies can infect with just a single bite

(Fact) – In some movies, the hero is bitten and it’s only a matter of time for him to turn into one of the creatures he’s running away from. This has a basis in reality as a person who is infected with rabies is known to show a zombie-like behavior. And their bite can also cause others to be contaminated, but not immediately.

Zombies are dead humans who came back to life

(Myth) – While the idea of the zombie came from that popular Haitian folklore, there are actually recent accounts of living people being turned into “zombie slaves” either by a curse or a form of medication. One of these cases can be found in the Philippines where an ethnic group makes a potion derived from local herbs which can turn anyone into a living zombie.

A zombie outbreak can be caused by a single virus

(Fact) – Anthrax is a deadly disease which is commonly associated with the zombie legend as the some symptoms (lesions and skin necrosis) are usually found to that of a typical zombie creature. This disease is highly infectious. Hence, we can also say that anthrax is one of the main causes of a possible zombie outbreak as it has the potential to infect many individuals at an alarming rate especially if you don’t carry a vaccine in your survival kit.

Zombies can multiply in number in a matter of days

(Fact) – In 2009, a brilliant doctor in the name of Robert Smith was able to come up with the zombie outbreak equation. According to his mathematical formula, a city with a population of 500k will be outnumbered by zombies in a matter of three days if an outbreak is already infecting the area. Mathematics is an exact science. And if we are going to base this in his equation, there is a big possibility that living dead creatures can outnumber a big human population within a week.

The government is also into this ‘zombie frenzy’

(Fact) – Well at least not in our own government, as President Vladimir Putin of Russia has commissioned his scientists to work on a zombie gun that would send microwaves to enemies and literally turn them into zombies. This weapon will surely be useful if it’s pointed at the right target.

Zombies are for real

(Maybe) – While our minds are filled with ghastly images of Hollywood zombies, there is one account that tells of a man being resurrected 18 years after his death. Clairvius Narcisse of Haiti claimed he is a zombie and that had died in 1962 but came back to life in 1980. Investigators said that he received a lethal dose of tetrodotoxin (a type of chemical usually derived from puffer fish) which mimicked a death-like state. He was forced to work at a sugar plantation from a time being and simply walked away after his master died.

Was this article helpful enough to improve your survival preparation? Please share your thoughts by leaving a comment below.

About The Author: Michael Martin is a former Navy Pilot who believes no matter the circumstance, one should always be prepared. Upon entering the civilian world, Michael spent his time traveling the globe and observing different cultures. Growing up in as the son of a serial entrepreneur it was only a matter of time before he took his love of the outdoors and passion for helping others to new heights by founding Bug Out Bag Pro. As a survivalist & entrepreneur, his vision is to help educate and prepare families everywhere with the information, skills and tools to survive any situation they may face!

Because zombies = web traffic so I’d say this article may help improve the chances for website survival. So, in that way, yes, writing about zombies helps improve survival skills.

Don’t hate, rescue hiker. I wouldn’t begrudge you any web traffic for your site.

Some people are interested in zombies and if that is what it takes to get someone to start prepping, then so be it. What do I (or you for that matter) care if they stock up, learn new skills and get ready for the undead? I just want people to prepare. The reason or motivation is secondary to me.

Well, read the following, it is alarming: http://www.bibliotecapleyades.net/sociopolitica/esp_sociopol_mindcon03.htm

Most people have heard of the Ebola outbreak, and some have seen the videos of people on Bath Salts or other form of stimulants attacking other people. Whether you believe in Zombies or not, everyone should be prepared for a disaster, man made or natural, riots and or looting and mob mentality, We have seen the actions of others and how they respond to mob mentality. Having a plan to protect yourself against a group of people trying to take your hard earned valuables or assets is always a good plan, regardless if they are zombies or a gang of… Read more »

FYI Zombie Hordes do exist; just take a look at the people involved in Riots or Black Friday shopping. Brainless STUPID people acting out of greed or hate driven by those that are in control of them. Welcome to the world as it now exists.

Zombies are real, they just do not look like the movie versions. They look like the average stupid American and they’re everywhere.
Been to Walmart lately? On Black Friday? They band together on days like that.

How to catch a zombie:

Hold a CLEARANCE sign they will come to you.

The above photos are strikingly similar to my wife’s family reunion videos. Coincidence, heck I don’t know.

Do you know how to get one armed zombies out of a tree? “Wave at ’em”.