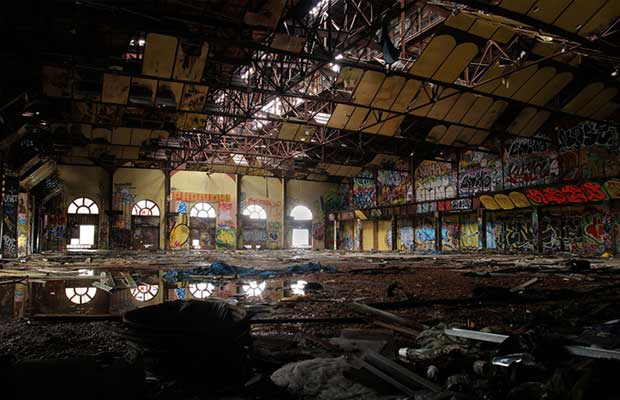 Imagine a place in your city where there are thousands of dark abandoned homes and buildings that are devoid of utilities such as water, sewer, and electricity. A place infested with rats and much worse. A place where the criminals and the outcasts of a society in decline have accumulated; a place where evil is festering. As we enter this realm of sinister darkness, our senses are overwhelmed by the odors of rotting garbage, and worse; toilets without water have been used and are overflowing. The sounds of shadowy figures are heard as they move away in the distance accompanied by the sounds of glass breaking and tin cans being kicked aside. As we enter into one of the antechambers our flashlight reveals a gruesome sight; the skeletal remains of a human lay in the corner of a room littered with garbage and an old mattress.

Sounds like the beginning of a horror story right? Well it’s not; it could be the description of an area of abandoned homes and buildings that exist within many of today’s so-called modern cities across America. In fact, the actual skeletal remains of a woman who was the victim of a sinister serial killer was recently discovered in a place similar to the narrative I have provided above.

As I sifted through the news of the day, I came across an Associated Press story that outlined a shocking fact:

There are tens of thousands of abandoned buildings and homes in the big cities of America, and these abandoned structures have become the operational bases of the outcasts of our society and others, possibly much worse. The AP article cites the number of abandoned homes and buildings in just Gary Indiana as “10,000” and in Chicago Illinois as “15,000”.

If you consider that these are the statistics for just two of the multitude of cities in America, it’s clear that the total number of abandoned buildings and homes across America may be in the hundreds of thousands. The occupants of these ‘dark cities’ could number even higher.

As we consider these dark places that have remained out of sight and therefore out of mind, we must now consider the potential serious problems that could arise from these dark realms, ‘cities’ within cities that are clearly the breeding grounds for evil.

Even with a minimal amount of imagination it’s not hard to conceive that these ‘dark cities’ could easily become (or already may be) the spawning grounds for the next great plague, only this time it may strike-down America instead of Europe as it did in the dark ages. Imagine for instance the Ebola virus spreading unchecked and untreated in these ‘dark cities’.

It’s not hard to imagine some criminal or terrorist who may be infected with some deadly, highly contagious disease, sneaking over the Mexican-U.S. border and making his way into one of these bastions of inequity. And once there, having the illness manifest and infect the occupants of these dark cities, which may number in the tens of thousands or more. In these ‘dark cities’ there are no medical services and the occupants thereof are not inclined to seek help outside their realm.

As these dark cities and their populations grow in numbers, our current illustrious administration would have us all believe that America is “prospering”, when in fact it is in serious decline.

Here are just some of the photos (where the photographer felt safe enough to film during daylight) of Detroit today:

So is America prospering and is America safer as the current administration would have us believe? The facts seem to have us conclude otherwise. America has never seen this kind of internal malaise before; America seems to be rotting from the inside-out.

Knowing and understanding what’s happening is the first step towards making a change for the better. American’s who are concerned about the future and about their families have some real work to do. The first thing is to do the homework and get educated on who, among us is qualified morally to lead others, and help them get elected into political positions where they can do some good. People with experience but who lack moral fiber are not, and have not helped the situation.

Secondly; get prepared! Things in America may get a lot worse than they are, and if you’re not prepared, then you may run the risk of becoming a casualty.

You took liberty in quoting the AP article about “abandoned” buildings …. the article actually stated that there were 15,ooo VACANT or abandoned homes and buildings in Chicago … big difference between a building being being vacant or abandoned ….