The Risk of Government Dependency When Disaster Strikes 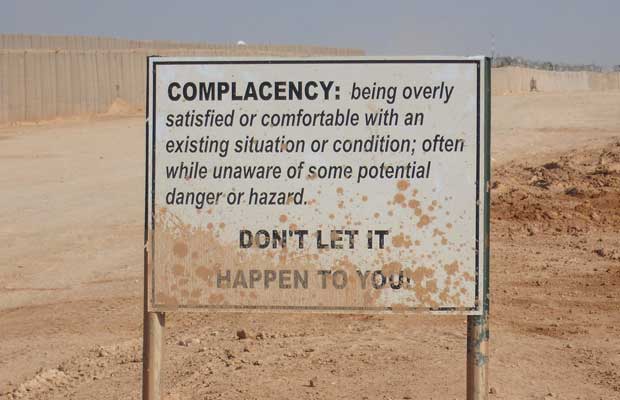 As Preppers, when we speak about the role of government in American society we normally refer to violations of the Tenth Amendment or over-regulation by local entities. In fact, most of what we talk about is what government isn’t supposed to be doing but is doing anyway. When the founding fathers chose to leave the day-to-day responsibility of living in the hands of the people themselves and their elected, local representatives they laid the foundation for the single most fundamental tenet of American self-governance: the responsibility of individuals to care for themselves. Preppers value this common sense tradition as inviolate, but as time has marched on and technological advances have made our lives easier and quite different from the 18th century, the debate has raged over how or if the role of government is supposed to adapt. More and more we see citizens advocating, if not demanding, the collective surrendering of rights in the name of safety.

In 1965, British PM Iain Macleod popularized the term “Nanny State” which conveys the idea government interferes with personal freedoms much like the modern “helicopter parent” hovers over a child so as to be involved in every minute aspect of their lives to detrimental effect. The term caught on in the States in the early 2000’s and is exemplified in policies such as banning smoking in public, open-air places, legislating the sale-able volume of soda pop, and mandatory helmet laws. As individuals we may agree or disagree with the wisdom of such choices if made on a personal level and we may debate if these are acceptable policies at the local level. That said, the power struggle between self-governance vs government-knows-best has reached a point where some people don’t only want government to protect other people from themselves against their will, but for government to protect us from every conceivable boogey man.

As I’ve written before, I’m a 911 dispatcher. I deal with mundane things like people asking what time the July 24th fireworks celebration will start (it’s a Utah thing) to the extreme like drowning toddlers and people falling 1,488 feet from Angel’s Landing in Zion National Park. We handle all sorts of stuff and I’ll readily admit not much phases me anymore. My experience provides an interesting perspective when people call in for assistance in that I am calmly removed from the problem. I am simply a facilitator between the caller and help and over the years I have recognized a persistent theme in non-emergency calls: “government help me”. To clarify, I am not talking about people who are having medical emergencies, or are victims of real crime, or otherwise have legitimate need of the services that their tax dollars pay for. My heart goes out to these people and I pray that their tragedies and problems are satisfactorily resolved as best can be.

When I say “government help me”, I refer to callers who for whatever reasons have failed to or refuse to attempt to remedy problems themselves. These people call the police on loud neighbors (in college housing, on Saturday night, at 7 pm), because a car has been parked on their street for 48.00012 hours, because a homeless looking person is in the neighborhood, because a person with brown skin is in the neighborhood, because children are making noise swimming in the pool at noon during the summer, because they were driving slowly and someone passed them and flipped them off, because a neighbor is mowing his lawn on the Sabbath … you get the point. The callers never fail to voluntarily give reasons why they call the police either: they’re afraid of retaliation, “you know how those people are”, “I’m ___ religion and I just don’t think they should be doing that”, “I want my conscience to be clear”, “this is a gated community”, and my personal favorite, “My Bishop told me to call” (personal responsibility waived!)

Could these reasons be legitimate? Absolutely. I can see why little old white grandma who hasn’t seen anyone of a different race until the last 5-10 years is afraid of four muscular Hispanic males in tats sitting on the front stoop smoking and joking with the radio turned up. I can see how someone who has talked to a loud neighbor once or twice and isn’t getting anywhere needs police to handle the nuisance. I get that there are reasons to call the police when I wouldn’t – I’m a 6’4” former Marine and don’t take crap from anyone; but I also have lived amongst many different races and creeds in this country and know how to approach people kindly and have conversations with them to find out where they’re coming from before I ask them to change. The people who have relied on political and religious forces to maintain their bubble have become complacent in their own community safety and management. Rather than get to know their neighbors, or even simply be brave and handle their own business as a matter of pride, they rely on government legislation and police action to save them from every problem, real or imagined, that they have. 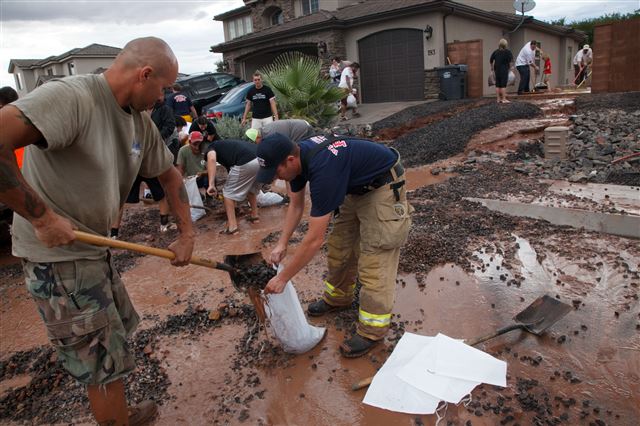 In southern Utah we have a yearly phenomenon called “Monsoon Season”. Every July-September (and in the winter too with snow melt) the summer rains come, sometimes once every couple weeks, sometimes many days in a row. We never fail to get that one storm which inundates the desert to cause massive flash flooding. The local rivers crest, the storm drains get blocked up, and we flood like Noah. In 2005 the Santa Clara river swept away 20 homes and caused another 20 to be condemned. The last couple years have seen “100 year events” damage numerous homes and infrastructure. Do a Google search for “St. George, UT flooding” or check out our online papers called “The Spectrum” or “St George News”. You’ll not only witness the yearly fury of Mother Nature we endure (like two weeks ago), you’ll see the same problems in the same areas over and over again.

We can’t stop a river from overflowing its banks, but we can not build in flood plain. We can’t make the rain soak into the dry ground, but we can ensure our storm drains are clear. We can’t stop the waters from rising when drains are overwhelmed, but we can prepare our own sandbags and form community relief teams ahead of time. Some of these responsibilities lie with local government because they’re the entity with legal authority to make engineering changes and finances from taxes to do it. Other preventative measures lie solely on the shoulders of the citizenry. As you read horror stories from our local news you may come across people who say they’ve suffered the same fate a couple years in a row. How is that possible? I know there is a movement to sue one of the local municipalities for failure to adequately maintain and prepare flood control in a section of the town which gets hit quite hard each year, but why haven’t these home owners begun to handle this problem on their own? My thought is that they could be complacent.

If we solve the problem in our minds by reasoning that government is responsible, we absolve ourselves of any culpability for our situation. We have “cleared our conscience” as some callers tell me and are free to go on our merry way without worrying about the dangers lurking in the shadows because “government will help me”. During our last round of storms it was so bad we had to triage responses from the fire departments to only help people whose homes were actually in the process of flooding. People were calling 911 frantic their basements were filling up while others called equally as frantic about water several blocks away and gosh darnit, they needed sand bags for their house on the hill so their sod didn’t get too wet. The citizens knew this happens every year, but very few actively prepared for what was going to come.

Why didn’t anyone call for sandbags hours before when the National Weather Service announced flash flood warnings? Why were people even calling the government for sandbags!? (I accept this is a better use of tax dollars than some others). Why wouldn’t responsible homeowners have their own stockpile of sand bags and the means to fill them? Just the other day I-15 near Moapa, NV washed out, completely shutting down the interstate between Utah and Las Vegas (Google the video of the man in the minivan getting swept over a drop off). The normal 1.5 hour trip is rerouted on county roads and state highways and now takes about 4 + hours. We’re talking regional affect here because of one storm taking out the only arterial route and you know what sorts of calls I’m getting? Irate people who knew about this disaster and could have read the news, but decided to wait until they normally would have left and are apoplectic they’re going to be inconvenienced due to not planning ahead.

Imagine if this occurred simultaneously with a massive earthquake in California, possibly “The Big One”. Could you imagine the hordes of people fleeing the carnage only to be stranded on the freeway? We used to have signs in Camp Fallujah, Iraq posted at the exits for those going on patrol that read, “COMPLACENCY KILLS”. I’m reminded every time I answer the phone.

In Canada where I live, you can get a massive fine for calling 911 for anything but a real emergency. Not in your state?

Hi canadian, thanks for reading! To clarify, I work in a center which answers both non-emergency and 911 calls – we simply put on a different hat and answer the phone differently depending on which line rings. Utah law chooses to err on the side of giving people the benefit of the doubt and removing any barriers or fear to calling 911. The thought is to deal with infinite non-emergencies coming in on 911 rather than have one true emergency not called in because the people hesitated weighing any potential punishments should their emergency be deemed otherwise by bureaucrats.The charge… Read more »

I guess that I should also clarify that many of these calls motivated by “government help me” as I categorize them do come in on the appropriate non-emergency line. My intent is to hopefully get readers to assess their situations and capabilities and to make the appropriate preparations to attempt to solve their own problems when safe and reasonable to do so. So many people are just simply unwilling or unable to help themselves and it bothers me. I would feel ashamed to be helpless or lazy, so I hope to help those in similar situations by encouraging them to… Read more »

Thanks Still Waters, I appreciate you reading.