If I had to name only one quality that separates the advanced prepper/survivalist from the pack it would be the presence of a solid disaster plan. When I refer to “planning”, I don’t mean having a plan “in mind”, and I don’t mean having a file on a computer somewhere – I’m referring to a physical document that has been printed and distributed to all relevant locations and individuals.   Human memory is far too fallible and too specific to a single individual, to serve as the storage medium for a serious disaster plan; and of course computers are relatively fragile and subject to the availability of an electrical grid that may not be available post-disaster.

Consider a disaster plan to be a force-multiplier for all your other preps. If your plan results in a greater crop yield then you have multiplied the effectiveness of the seed you have stored. If your plan allows you to address a security incident with less use of ammunition, then you have multiplied the effectiveness of your ammunition stores. As you might imagine, a good plan should touch on all aspects of preparedness.

When it comes to disaster preparedness it is more the exception than the norm that the new or intermediate prepper will take action without first developing a comprehensive and coherent plan. In fact, I’m probably more guilty than most when it comes to “prepping without planning”. It was only while authoring my book that I came to fully appreciate the importance of planning, and my folly in not having planned much better in advance (Had I planned first I can guarantee you that I would now have fewer survival knives and more buckets of beans and rice!). While you may have some serious supplies and equipment stored away and ready for disaster, if you don’t have a plan then you still have significant room for improvement.

Side-note: My first step in researching the topic of disaster planning was to perform some online searches to learn what was already available that could serve as inspiration for my own writing. I was stunned to discover how very little good information was available on the topic. The only real material I could find were stylishly-designed, lightweight, one-page checklists published by various governmental “alphabet agencies”. All of these plans assumed a very short duration emergency during which government played a major role in recovery. (In other words, these plans described a fantasy world that does not exist!) This discovery only reinforced my sense of urgency in giving this important topic the coverage I had come to realize was sorely lacking and much needed. 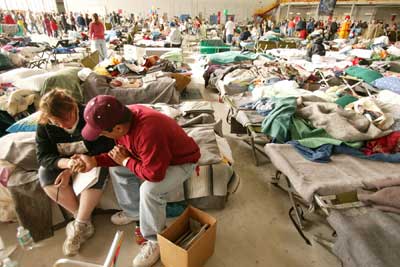 Do you have a plan?

During times of crisis one can imagine that there will be plenty of nervous energy available that can be put to good use in executing a disaster plan, however it is just as easy to imagine that the same nervous energy would make it very difficult to develop any sort of meaningful plan. Do not wait until disaster strikes to plan, as it may very well be impossible at that point.

With planning, as with skinning cats, there are any number of valid approaches. In this article I’ll describe the approach to planning that I formulated myself as I authored “When There is No FEMA“. The foundation of my approach to disaster planning that I develop consists of:

“Chain of command” is a military concept that refers to the group’s organization structure and which group members are responsible for providing direction to others. Typically the individuals occupying these positions of authority will be assigned either by simple mutual agreement among group members, or possibly by vote. Having a defined chain of command is essential not only to provide quick resolution of disagreements, but also to enable the group to act quickly and decisively when faced with a threat. If for some reason the individual at the top of the chain of command becomes unavailable or incapacitated then that leadership role should automatically be delegated to the person next in line in the chain of command.

Side-note: I am firmly convinced that many people in my own daily life who, if I shouted “Duck!” to them on observing that they were under immediate threat, would react but by asking me why I wanted them to duck, or perhaps by questioning my right to tell them to duck. During times of disaster everyone needs to be explicitly pre-conditioned to follow orders first and to ask questions only after the threat has passed.

The incorporation of alert levels is one of the key factors that differentiate a simple disaster plan from an advanced plan. The alert levels reflect different degrees of disaster severity. One reasonable way to define levels is to base them on the expected post-disaster recovery period. The following are examples of typical alert levels:

At the highest level disaster planning should consist of a general disaster plan (“GDP”), along with a site plan (“SP”) for each covered location. Of course if your plan is to only cover a single location then these two sub-plans can be merged into a single document. The GDP provides information that is common to all locations, while each SP provides location-specific information. If, for example, you had family members that were living out of town (e.g. sons or daughters in college) then your plan would include SP’s for their locations in addition to the home, as well as a GDP. A good GDP should include:

The SP for each location should cover the following topics:

The coverage of each of these topics in the SP is important; however some of these topics may not more than a few sentences in the plan. For example the sanitation plan might consist of a simple bulletized list of rules that govern sanitation (when to wash hands, sprinkling lime powder over human waste, distance of latrines from living areas, etc.). It would be prudent to assign these topics as areas of responsibility to members of your survival group or community, and to have those group members lead a discussion of their topics during scheduled group meetings.

Of the planning topics identified above, special attention should be paid to procurement. While many preppers will assert that you should put away all the supplies that you may conceivably need well before disaster strikes, real world constraints often simply do not permit this. Under the right circumstances, however, you may very well decide to re-prioritize your preps, and because the window of opportunity to do so may be very brief it is essential that this procurement process be planned in advance. The procurement plan could break down into the following distinct steps:

Even in today’s pre-disaster world there are increasingly common stories of “home invasions”. Stories of looting in the wake of even relatively small disasters are all-too-common. It is a certainty that in the aftermath of a major disaster that all preppers must be ready to defend themselves and their property. A good defense plan should consider avoidance, deterrence, detection and response. Avoidance might consist of simply keeping a low profile so that potential threats pass by without engagement. Deterrence might include posting signs around the property that could convince some threats that the risk they take in attacking will not be worth any benefit they can gain. Detection might include establishing watch posts and means of communications between locations as well as alerting systems and booby traps. Response would include a list of policies governing how and when force is to be used to repel attackers, as well as how and when an orderly retreat should be conducted.

The defense plan for a location should cover:

The process of evacuating (“bugging out”) to another location during a time of crises is one of the most important aspects of disaster planning. In the absence of a plan valuable time will be needlessly consumed in determining what supplies should be taken.   Additionally, the likelihood of leaving behind critical items increases greatly when evacuation does not take place in accordance with a pre-defined plan.

While your disaster plan may not be a “polished document”, even a good rough draft that is printed and distributed can make a world of difference. By causing you to consider all aspects of preparedness in advance and how to make best use of resources, a good disaster plan can greatly increase the effectiveness of your prepping investments and can easily make the difference between life and death.

About the Author: Richard Bryant is author of the preparedness book “When There is No FEMA – Survival for Normal People in (Very) Abnormal Times” and a long-time preparedness group organizer in Central Florida. He has recently relocated permanently to his disaster retreat in rural West Tennessee. The first 60 pages of his book are available for review and download at http://www.nofema.com.

Very nice article. Is it bad that I’m at “Alert Level 1” all the time? 😉 A serious observation and question though – I think you hit the nail on the head about people we know asking “why?” when told to duck. I have several in my immediate and extended family whom I envision doing exactly that (from previous experience) when I become responsible for their safety since I’m the only prepper in the family. I realize I could opt not to take care of them, but I would be pressured to do so and I am somewhat naturally inclined… Read more »

I suggest that you impress on them that the entire purpose of this policy is to save *their* hides, and that if they don’t adhere to it they will be jeopardizing everyone else in the group as well. Also, I would suggest increasing the seriousness with which it is enforced with increasing alert levels (and of course when drills are conducted). When SHTF they’ll just naturally start to take life more seriously.