Are You Tactical or Tacticool? 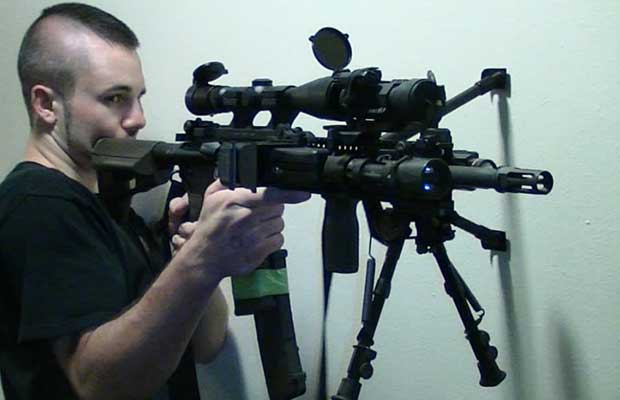 Prepping is all about giving yourself a chance to survive. By preparing for disasters, you are proactively taking steps that give you higher odds of making it through or out of whatever circumstances you are faced with. If you have stored up emergency food, you will be less likely to go hungry if there are food shortages. If you have backup power, then you will not feel the same effects as your neighbors if the electricity goes out. These are actions you have to take in consideration of your family well in advance of bad times. FEMA or your local government doesn’t have your best interests at heart, only you do and the responsibility to be prepared for emergencies is yours.

We talk about Prepping or preparedness almost every day on the Prepper Journal and there are so many facets, so many needs we all have. There are no shortages of disasters that happen every day to prepare for and as preppers, we strive to act now so that we will have the advantage of tools, resources and skills needed for an emergency. We discuss storing water so that everyone in your family will have at least 1 gallon a day to last for some extended period of time. We talk about stocking your pantry with food that your family will eat should the grocery stores be out of food, or become unreachable because the roads are closed due to weather. We talk about all manner of preparing both from the standpoint of purchasing or setting aside supplies as well as becoming more self-sufficient so that you don’t rely on the stores for your food, the electric company for your power and even the police department for your safety.

Most of the topics of prepping are simple common sense (at least to me) and they usually fall into the buckets of having stored provisions for times of trouble and working towards backups when those stores run out. You have several months’ worth of food stored as well as a garden to supply additional food when the pantry is bare. The security aspect we discuss as preppers is different though. Security must be considered in some ways the same as food or water because without sustenance, you will die. Likewise, if you are defenseless you could fall prey to people who want to do you harm.

When it comes to security, I make no qualms about saying that I believe every responsible adult who is legally able should own a firearm. When it comes to firearms there is a whole world of different models to choose from, equipment that will augment these firearms and additional supplies you could purchase. It isn’t hard to start spending too much time, money and your focus on the latest gear or the proper outfit and instead of prepping we find ourselves falling into the Tacticool trap.

By tacticool, I mean that instead of focusing first on what you need for your families’ safety you focus on looking cool. I think some of this is simply part of being a man in that we want on some level to live out our Navy Seal fantasies while we are living our Homer Simpson reality. One simple example of this concept are these two hilarious videos below from Highjak86 who roast the tacticool crowd in a brilliant and funny way . These two videos illustrate the absurdity of some people’s focus on gear without any logic.

The first video is titled the “Most tactical AR15… Ever!!!”

The second video is titled the “Most Tactical Loadout….Ever!!!”

That is a great question and one that I have to ask myself anytime I want to purchase something new because none of this gear you see people running around in comes cheap. To answer the question though, it really depends on what you are preparing for and when it comes to self-defense what type of situation you foresee. Tactical gear intentionally mimics the gear soldiers wear into war. Actually, a lot of the suppliers to the military sell to the civilian market as well so you are able to purchase equipment that our soldiers actually use in conflicts.

Preppers see the usefulness in purchasing gear like this because over time the gear our soldiers wear has been tested. We know what works and what doesn’t and there aren’t many better options for their intended use. Now, the next question is what was it designed to be used for? That is simple. Tactical gear is designed to accompany a person into combat and carry the supplies you need to function as highly as possible so that you will have a better chance of coming out of combat alive.

Can you wear camouflage out hunting? Of course. Can you take a IFAK with you as part of your car survival kit? Absolutely. Would you ever take a bulletproof plate carrier with 6 AR magazines, 3 pistol magazines, a dump pouch, radio pouch and your IFAK to the grocery store? Probably not. Not unless you were picking up groceries during a Walking Dead zombie apocalypse.

There is a lot of gear that the average prepper can purchase that makes total sense when you are purchasing it with the idea of possibly going into combat. By combat, I don’t mean you are part of the military, enlisted for 4 years and shipping out overseas for a tour of Afghanistan. Have you ever seen riots? Have you watched the news of ethnic cleansing in Africa? Have you seen the footage of people being shot in the street or having their heads chopped off for believing in the wrong religion?

Combat isn’t reserved in all cases for our armed forces and bloodshed and chaos can visit you on your street as history has proven time and time again. All things in moderation though, right?

I think that there are those who genuinely love gear and I fall into this camp sometimes. I think there are a lot of cases where purchases of tactical gear are perfectly valid and I’ll even cover some of my purchases and recommendations in upcoming articles so you can make your own decisions. There are some people who just love to buy things and when something catches your eye, you reach for your wallet. This is when the prepper can get into trouble.

When does it go too far?

Prepping needs to be viewed across a wide spectrum of needs spread out over your available resources. For me the most important things a prepper needs to worry about are additional food, water and shelter. This is what is the easiest to acquire and what is most likely you will need in the highest percentage of cases. You are probably a thousand times more likely to go through a natural disaster or even a relatively minor weather event that disrupts your town than you are to go through a civil war. You are more likely to lose power than to have the government collapse and your family is much more likely to need food than they are to need you standing in the front yard in all your tactical gear shooting zombies as the shuffle toward you.

Prepping should be a balance of priorities and your first priorities should be food, water and shelter. Security follows that, but before you go and spend $2500 on a high-tech sniper scope I would spend $2500 on long term emergency food. I am not saying don’t spend anything on security, but don’t become tacticool at the expense of feeding your family. Don’t look like Rambo if you don’t even know how to shoot that rifle. Don’t invest in a high-dollar night vision scope, if you can’t last the winter without heat.

There is nothing wrong with wanting gear as long as you are training with that gear and purchases are balanced with your other needs. Let your wife see you are thinking about her and the children by taking care of the needs they feel are important and think long and hard about your tactical purchases. I still think they have a place for those who can see a potential use, but judgment and moderation will make your choices wiser.

Every man thinks that he is endowed with almost godly powers of logic and rational thinking. Including myself. And when you are in the store staring at that new AR15 or any of the cool things you can attach to it, while wondering if your bank account can take the hit. In the moment it always seems logical to purchase these things. I very much appreciate this article as a reminder to stop staring through the scope and look at the logic of the all-inclusive big picture. When you are looking through the scope, all you see is such a… Read more »

Thank you very much David!

Great article. This topic is something I think of all the time, not so much that I’m buying all the tacticool stuff but rather “Am I prioritizing correctly?” With so much needed and funds usually being very limited it almost makes every purchase a very long drawn out debate in my own mind. Thanks for all the work you put into this site Pat, these articles are what I look forward to most at my lunch break at my desk.

Thank you very much Maximus! I have to debate myself all the time also. Now, its over a bipod for my 30-06.

Sounds like you might have an interesting job…. I tried watching Revolution when it came out and I really wanted to like it. After about 4 or 5 shows though I quit. It was too hokey in parts, but I might pick it back up again if I am ever in a pinch for some entertainment. I do remember that episode you mention though and I think it is insightful as you say. He had everything in the world material wise, but you take that away and the only thing left is survival.

I myself have a prepper back back…Gunslinger 2. I can walk for miles with it. I use it while deployed overseas. I’ve got a 6.8mm AR-15 style rifle that slips in the back, a UTAS 15 Shotgun in a scarab on the side and on my hip a Sig. In the pack is everything I need to bug out. Mags with rounds, couple days of food etc etc. All fits nicely. For myself the only add on on my rifle is a Acog with RMR, and sling. All the rest of the stuff other then perhaps a gun light is… Read more »

You guys are so gonna die when the zombies come. How do you expect to survive without a lime green picatinny mounted chainsaw on your .300 blackout AR? It’s not possible. Furthermore, if you do t have a Lenco Bearcat bug out vehicle you should probably just shoot yourself in the head so that you don’t inevitably turn into a zombie later, because you definitely will. First though you should send me all your guns and supplies so they go to good use. I promise to say a prayer for you while I’m eating astronaut ice-cream in my APC and… Read more »

Ha Ha! Good one on the sharpie!