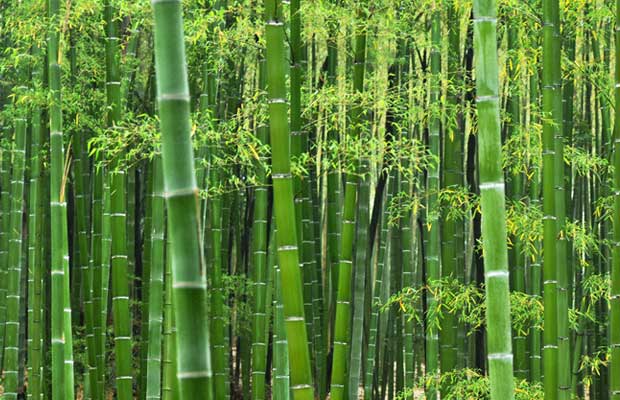 I was talking to some friends the other week and the subject of bamboo came up. My one friend was discussing how much work he had planned to do the following weekend in order to keep his bamboo in check and shared stories of the infestation in his yard. The other friend who had seen the bamboo for himself described it as something out of the movies and visions of Crouching Tiger, Hidden Dragon fight scenes flashed though my imagination as I tried to picture my friend’s back yard. We talked about how quickly the bamboo would grow and the only possible means of eradicating this seemingly invasive plant were to pull the entire root system out with heavy equipment.

I have heard for years that bamboo would take over if you planted it and have even witnessed people who like my friend apparently thought this would be a great looking addition to their yard. These people quickly found out that the insanely fast growth rate for bamboo could quickly spiral out of control and I saw yards that were soon blotted out with the fast growing crop and like my friend had inspired hours of frustrating work to keep it in check.

Bamboo is something that I have admired for a long time, but anywhere I saw it growing, I would chuckle to myself on the inside and say words to the effect of ‘they don’t know what they are getting themselves into’ . I thought that like kudzu, this crop was something that was brought over here and could quickly take over if left unchecked. I began to see it more and more around my home and thought that eventually we would all be crowded out and I would need to break out that heavy equipment my friends mentioned.

It wasn’t until the other day as I was walking that I started to think that bamboo could be a really great asset if we went through a collapse and I started researching all the things that bamboo could be used for relatively easily by any prepper out there. I don’t know if I would plant any in my yard, but I know where a good supply is growing and if I needed to, I could use this beautiful plant for several grid-down projects that could make a life without Home Depot much easier.

What can you use Bamboo for?

Bamboo is a really versatile material and offers a wide range of uses for survival situations when access to even the most basic necessities are gone.

Bamboo isn’t only known for its incredibly fast growth rate which in some species has been recorded at 4 feet in 24 hours, but its tensile strength rivals many alloys of steel. Its compression resistance is greater than many mixtures concrete and it has a higher strength to weight ratio than graphite. All these advantages together make it a great building material.

Bamboo poles can be lashed together with any strong rope or cordage like paracord using the method below from ITS Tactical.

Scaffolding – Once you have the ability to lash poles together, you can make all sorts of things like a wall, floor, ladder, roof or scaffolding. I was in China last year and was initially surprised to see scaffolding made of bamboo in use all over. Obviously, the strength of bamboo makes this a great and probably cheap resource to use instead of steel poles. I could see using the bamboo to build scaffolding for building projects or something like an OP higher up in the trees.

Containers – Bamboo stalks grow in segments that are hollow and water tight. If you cut one of the segments out, you can make a container for water. Add a little paracord and some ingenuity and you can build a lot of things with bamboo like Cody demonstrates below.

Tools and Weapons – Bamboo can be used to create weapons too in a grid down society where bullets might no longer be available. Tribes for hundreds of years have been making bows, arrows and even the string to launch them out of bamboo. Kitchen utensils like knives and spoons can also be crafted from bamboo with a little time, patience and practice. You can make fishing spears, axes and general mayhem weapons. One weapon that comes to mind is the punji sticks made famous in the Vietnam war. In dire times, this low-tech defensive weapon can seriously injure enemies and it goes without saying that you need to think carefully before ever considering implementing something like this.

Rain Gutters – Bamboo is a perfect rain gutter so if you want to add some water catchment abilities to your grid-down retreat but the gutter guard guy isn’t running by your house anymore, you can simply build your own. The instructions on the GuaduaBamboo.com site are easy to follow.

What bamboo ideas do you have?

Bamboo can be controlled if you take the right steps in planting it. That entails digging a trench and putting a barrier in the ground where you don’t want it to grow. It makes an awesome barrier and privacy fence.
One of my friends has had a bamboo barrier for 10 years now and has never had it become invasive.

I read that too obxster. but I have tried the same thing with weed prevention and it didn’t work. I think I am going to play it safe and keep the bamboo away from my yard, but close enough to get if I need it.

That doesn’t work on the bamboo the article is talking about . The bamboo mound just eventually breaks the container when he expands.
But that is the wrong kind of bamboo to plant anyway
Your friend probably has the more expensive Japanese bamboo which grows thick and very slowly . It multplies by undergrown runners and never is a problem.
The kind in the article grows in a hard mound that just expands and expands, until finally the mound itself dies

I agree about the trench.
I used it around some large established bamboo.
I didnt use a barrier, just left the trench open.
Clean out the trench & cut off new shoots periodicly.

Also what Ive done when planting new bamboo is to sink a large concrete pipe in the ground first & plant in the center.
I use cast concrete 120 cm diameter by 40 cm deep.

you could use it for tomato stakes, chicken house perches or burn it as fuel.

Thanks for the add Kate, I was going to mention that too as well as trellis for vines like cucumbers or beans or even garden fencing.

Be sure of type of bamboo you have. Running variety is the scourge spoke of, clumping rarely moves beyond a small area for years.

There are two types of bamboo, clumping and running. Clumping does not spread.