This is where I know the article sounds a little like an infomercial, but I am going to continue. What if I told you there was a device you should have at least one of, maybe two or three in your home that was vital to being prepared for certain types of emergencies? What if I told you these devices were approximately $40 each, could save lives and didn’t require any license? What if I said that nobody would look at you weird for buying a couple of these and if the SHTF you would want to have these just as badly as you would that new Glock 17 you have your eyes on?

Give up? The humble fire extinguisher is what I am talking about here because it is one thing that myself and a lot of preppers take for granted I think. One of our readers, Marc sent me the following question:

A question for you to pursue concerning an EMP (either nuclear or natural); Referring to reports of the Carrington Event, The telegraph stations were highly electrified, telegraph operators were severely shocked by the current flow through the telegraph lines, telegraph keys and paper caught fire . . . isn’t it reasonable to believe that, should we experience a similar or worse situation, not only will most electronics burn out, but most that are connected to the grid at the time will catch fire. You could instantly have several fires, simultaneously, in various parts of your home. How many fire extinguishers do you have? (You certainly couldn’t use water) And does everyone in your household know how to use them?

So, the scenario from Marc is essentially a high powered electric surge like an EMP, or Coronal Mass Ejection (CME) that hits your neck of the woods and the resulting power surge causes fires. The phenomenon of solar storms isn’t conspiracy theory, they are real and the chances of us being affected by another storm similar in magnitude to the Carrington Event of 1859 is highly likely although researchers say we are entering a quiet period for solar activity.

The Carrington Event is interesting because this happened recently enough that we had some form of technology that was impacted, but nowhere near as much as we have now. The History Channel describes the scene following the surge for some telegraph operators in 1859:

Many telegraph lines across North America were rendered inoperable on the night of August 28 as the first of two successive solar storms struck. E.W. Culgan, a telegraph manager in Pittsburgh, reported that the resulting currents flowing through the wires were so powerful that platinum contacts were in danger of melting and “streams of fire” were pouring forth from the circuits. In Washington, D.C., telegraph operator Frederick W. Royce was severely shocked as his forehead grazed a ground wire. According to a witness, an arc of fire jumped from Royce’s head to the telegraphic equipment. Some telegraph stations that used chemicals to mark sheets reported that powerful surges caused telegraph paper to combust.

Can you imagine something like that happening now when just about everything we use runs on electricity?

Why do I need a Fire Extinguisher? 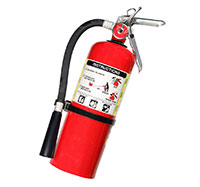 This one weird trick could keep your house from burning down.

Marc’s question gave me one of the many slap my forehead moments I have had during my time prepping. His question is so important for preppers on so many levels that I can’t believe we haven’t discussed this further and with more emphasis on the crucial need a fire extinguisher fills.

On the Prepper Journal I have spoken a lot of times about how the act of Prepping is simply being prepared for life’s unforeseen events. We talk about the need to have food storage in the form of a stocked pantry for when the grocery stores are closed or out of food. We discuss having long-term stored foods that can last for 20 years or more so that when our pantry is empty we have something to fall back on and lastly a garden full of fresh vegetables to carry us well into the future. Food security is vitally important and is probably the single most discussed need when someone begins prepping because it is so easy to relate to hunger.

Once you have food taken care of, water is next on the agenda. Storing water is simple and anyone can stock up a few dozen gallons without much effort or cost. Expanding that we have filtration devices for cleaning the water we may have to gather when our stored water is gone. Rain Barrels I know have to be one of the simplest ways to get hundreds of gallons of fresh water just by letting the clouds do what they naturally do.

After food and water independence we have security – usually in the form of firearms of one shape or another. We battle over the better choice between an AR15 and an AK-47 and every variant in between because when danger comes beating down your door, we don’t want to have to wait for the police. Being able to defend your home makes you less reliant on law enforcement when crucial seconds are on the line and your life may be in danger.

What about fires though? I know I haven’t discussed this too often on the Prepper Journal, but not being able to call the fire department if the grid-goes down could cost you everything you own. Even if you were able to get the entire family to safety, what about your preps? What about your shelter? What about all that stored food hidden in the back of your bookshelves? If you couldn’t put out a fire quickly, everything you had prepped for could be gone in minutes. 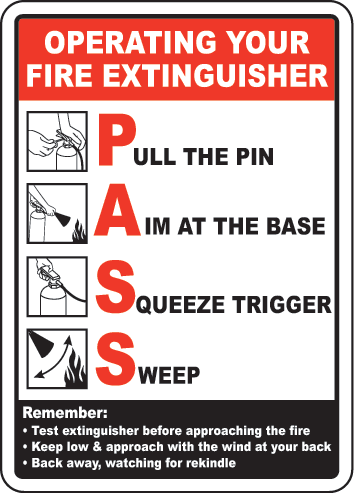 Even if we don’t have a solar flare or an EMP, fires happen every day. According to the Natural Fire Protection Association, in 2012 there were over 365,000 fires in the US alone. That was with society functioning as normal. That was with fire departments not dealing with widespread disaster and chaos. When you lose power people turn to candles and lanterns for light. These cause fire easily because we aren’t used to walking around with an open flame. When it is cold, people start burning things to keep warm if the electric or gas furnace is no longer working. I think we could easily see fires that result from simply trying to see that could destroy entire homes if the grid went down and there was no way to contact the fire department.

Fire extinguishers are about $40 for a 5lb model and a little more for a commercial 10lb. I already have one in my house, but I think 2 more at a minimum is what I should have to give me some measure of comfort and an ability to put out most accidental fires before they get out of control. Yes, I know that Glock may have to wait another week, but you can’t shoot a fire out and this is one prep that seems to be more important right now.

How are you set for fire protection if the grid goes down?

If your house burns down, you will lose all, or a large portion of your preps. If you have an outdoor water source, a gas operated water pump should be a consideration.

Absolutely! I saw a video of a man who was defending his home from the Colorado wildfires. He had a lake or a river right next to his property and was using a generator powered pump to spray water over his roof. He saved his home while others lost theirs.

Having your own lake is a rarity though and living through a wildfire might even be more rare for most people, but a routine fire is something we could all face.

Another reason to prepare and diversify your preps if possible.

DH works in commercial construction, and when they do demo jobs, they often throw out perfectly good fire extinguishers. We currently have 2 of the 10# commercial extinguishers, as well as a smaller one we keep on the porch near the propane grill. Our camper also has a small one that came with it…And don’t forget to make sure that everyone knows how to use them…P.A.S.S.= Pull the pin, Aim, Squeeze, and Sweep…

Great point! I am going to update the post with a graphic that shows what P.A.S.S looks like. Thank you!

I was wondering how effective a garden/yard sprayer would be. I’m talking about the 1 gallon hand pump type. At least it could be something staged where candles and such is in use. Wouldn’t want a steady stream but have it adjusted so it sprays a fan shape. That way we could save our chemical extinguishers for grease fires and electrical fires. I would love to hook up something more substantial like a gas operated water pump. I live here in NC and wildfires are something we don’t experience much at all and it’s usually reserved to the mountain areas… Read more »

I think that is a possibility, but unless you were trying to reuse an existing item or save money, I don’t know if I would try that indoors for two reasons. First, I have bought those garden sprayers before and on more than one occasion, they have been clogged up. Once I remove the nozzle tip and perform simple cleaning maintenance they work fine again, but I would hate to trust my life with something like that. If I have a fire I want whatever I am using to put it out to work as quickly as possible. I guess… Read more »

Ex-Navy, firefighting training was a constant from bootcamp and regularly after. Have 2, or more, easily accessible extinguishers on each level of the home, in the garage and other structures, and each vehicle. Two people fighting a fire with extinguishers doesn’t just double the effectiveness, but more like quadruples (squares) it. Practice your “FIRE!” drill together, and keep your backs to a safe escape route. Great article.

Thank you very much Squid-ster!

Excellent suggestion!! I have 2 smaller types in my home and one in my outside workshop but I just added to my list for tomorrow to get a larger one for my most valuable possession – my home. Thanks a lot!

My pleasure! Thanks Charles.