Survival Sanitation: How to Deal with Human Waste 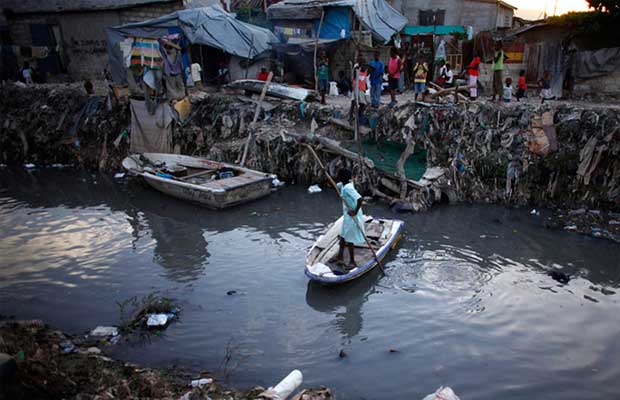 This article was originally published on the Tactical Intelligence blog. It is the second post in a three-part series on survival sanitation and it is one of the most overlooked but deadly topics of living through any type of disaster. As part of any grid-down plan you need to consider how to deal with human waste because that is probably the single biggest contributing factor to disease. Diseases like Cholera were so rampant in the aftermath of the Haiti earthquakes in no small part because of sanitation issues.

In a SHTF situation, proper sanitation is of utmost importance if you want to keep your family from getting seriously sick. When you add to that a lack of medical facilities due to grid-down issues, staying healthy becomes even more crucial.

In this series I discuss the skills you need to avoid getting and spreading disease, and how to deal with waste and trash when your town and city services are no longer working.

When the grid goes down it doesn’t take long for serious sanitation problems to erupt. Take Auckland New Zealand for example:

In 1998, Auckland suffered a 5-week long power outage that halted water supplies, causing a large part of the city’s apartment dwellers and office workers to lose the ability to flush. Since the average person did not know how to properly deal with human waste, after only three days the resulting lack of waste-water services quickly escalated into a sanitation nightmare.

Here are two accounts of that time (please see footnotes for full articles):

Since water and sewage rely on electrically-driven pumps to get them into office blocks and towers, these services often aren’t available either. What little power is available is being used by emergency and civil services as far as possible, with other services like traffic lights being run if there’s anything to spare. Many office blocks have no power, water, or sewage services available. Combine the lack of sanitation with absence of air conditioning and you can imagine what conditions are like in parts of these buildings.[1]

And here is an account from someone who was tasked in writing up a white paper for the New Zealand government on the effects caused by no running water:

People in general are not smart. Rather than try and conserve or make a plan once the water stopped flowing, they would flush their toilets. Without power from the force of water pressure the tank doesn’t refill. The domino effect is not only gross but staggering, what human beings that have never lived beyond modern conveniences will do is unimaginable.

What I researched and wrote about blew my own mind…when people were actually confronted with such a situation, they went where ever they could – they filled the toilet, the toilet tank, the tub, the shower, the sink – when the bathrooms became uninhabitable, they went in corners, boxes, bags, closets…most however left by the time they were using the tub. Guess how long that took? That’s right, three days!.[2]

How to Dispose of Human Waste in a Grid-Down Situation

If you’re in a situation where the grid goes down and the water stops flowing, you’ll want to be sure you’re correctly dealing with human waste.

If You Have a Septic System

First off, if you have your own septic system, you’re in a better spot over others connected to a town/city sewer line. With a septic system, as long as you have availability to water (from storage or any grey water source), you’ll still be able to flush.

How to Flush without Running Water

If you’re short on water, then I recommend you follow the same procedures as those who are connected to town/city sewer lines:

If you are on Town/City Sewer Lines

If you’re connected to a town or city sewer line then the the absolute first step is:

Make sure the sewer main is not down!

If the sewer main is down, don’t flush the toilet. Not flushing will prevent your lines from mixing with neighborhood crap and backing up into your plumbing (not just the toilets but the sink and tub too).

If you’re absolutely sure there is no issue with the sewer lines, then you can follow the same method as someone on a septic system. Just be sure you have enough water for drinking, cleaning and cooking.

Before I get into some of the non-water dependent methods of waste removal, there are three things you need to be mindful of: flies, pests and pets. 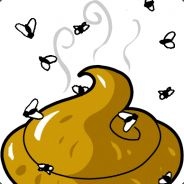 These guys would like nothing more than to chow down on your business and in some way come into contact with you or your living space.

Flies especially are notorious for landing on your food and plates while eating, and wouldn’t think twice about doing that after having just enjoyed a fecal feast at your expense. And what will soon follow is a fecal-borne pathogen’s ultimate fantasy — amounting to a health nightmare for you and your loved ones.

Given that, you want to do everything in your power to prevent them from coming into contact with your excrement by keeping it covered and clean (more details to follow).

Waste Disposal in a Rural Area

If you live in the boonies or a semi-rural area but are still connected to the grid, consider yourself lucky. For you guys, it’s just a matter of doing your business outside. 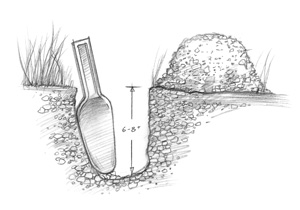 In a short-term emergency, a few cat holes is all you need. Just take a garden trowel, a small shovel, or a post digger and make a hole about 6-8 inches deep and 4-6 inches in diameter. Do your business in the hole, wipe, throw the toilet paper (or leaves

) in there too, and cover it up with the dirt you took out.

Although this is an easy method, here are a few rules you’ll want to abide by:

For a longer-term sanitation solution, you’ll want to build yourself a trench latrine.

A trench latrine is basically an over sized cat hole that is used multiple times. With the exception of dispersing it over a wide area, the same rules above apply to trench latrines as well.

It’s also recommended that you build some type of privacy partition. An emergency situation is stressful enough. You don’t need to give anyone the added pressures of becoming a peep show. For example, a simple partition can be built with a few stakes in the ground with blankets, sheets or tarps stretched between them.

Since it is a multi-use station, you’ll also want to prevent any flies and pests from coming into contact with the exposed excrement. To do this, after each use cover your business with some wood ash, quick lime, or a few inches of the dirt that came out of the ground when making the pit.

Waste Disposal in a City

The average person produces around 2-3 pints of urine and 1 pound of poop a day. Multiply that by the number of people in your family and in a short time you can only imagine the amount of crap that would pile up in an extended grid-down situation in the city.

In most cases, city dwellers (and many suburbanites) do not have access to land where they can safely dig a trench latrine or cat holes. If you are one of these unlucky folk you’ll need to consider other options. Here are two possibilities that you could use:

Use Your Existing Toilet

Even if the sewage lines are down or if you’re short on water, it’s still possible to use your existing toilet:

Use a 5-Gallon Bucket

A 5-gallon bucket can be used in a similar way to the toilet as explained above.

Like the toilet-method above, you’ll want to line it with a double-bagged layer of trash bags (heavy duty are highly recommended). For a seat, you can either sit on the rim of the bucket directly (it’s actually not as uncomfortable as you’d think), place your existing toilet seat on it, or place a couple of 2x4s or other similar objects on the rim to fabricate a makeshift seat: 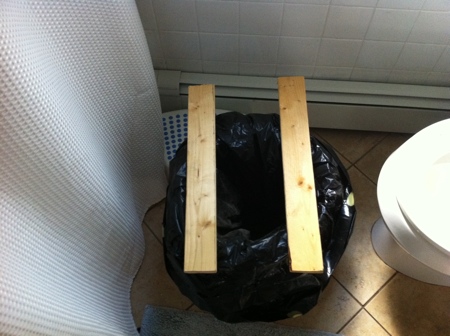 If you feel like spending a little money you can pick up a toilet seat cover made for a 5-gallon bucket.

as well as toilet deodorants

that control the smell and are made for these types of portable toilets. I don’t have any experience with these but they seem to get good reviews in Amazon (click on an image to see the product and reviews): 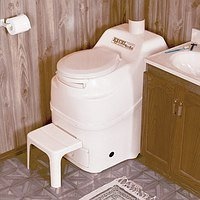 For those of you with a bit more money in your pockets, they sell non-electric composting toilets

that are completely off-grid, require no water, and supposedly convert human waste into usable compost without odor.

If any of you have these types of toilets, I’d love to hear from your experiences. That may be something that an apartment/city dweller could use in a SHTF situation.

I hope you come out of this post realizing how important the safe disposal of human waste is and how you can properly take care of you and your families waste if times get bad.

In the next and final article in this series I’ll be covering how you can properly dispose of garbage in a grid-down scenario.

One point I would like to make about this article in reference to the use of using grey water to continue to flush the toilet after the system has gone down. In many parts of the US and UK the sewage systems only use gravity on a very local basis sometimes only for a very short distance before the effluent is PUMPED away to the treatment works. if you continue to flush in those areas you are very likely to find pools of effluent, faeces, and other muck forming pools at the lowest point of your street. from here it… Read more »

In a long term survival situation composting humanure would be far easier and definitely safer.
http://humanurehandbook.com/instructions.html

I can’t believe more websites don’t mention the composting option. We don’t even have a normal toilet in our house, just a Loveable Loo. We made it for a few bucks and not only is the compost great, but these seem to be one of the best options in a power outage. We use sawdust in ours but in a pinch, soil, kitty litter, almost anything can be used to cover the excrement between uses. Google “loveable loo” on “images” and you’ll see lots of ways to make one.

It only takes about a quart and a half of water poured into the bowl to flush the toilet. You pour it directly into the ‘throat’ of the toilet as quickly as possible and it goes right down. However..I suggest you use a bucket with a garbage bag inside of it if your sewer and water services are out, otherwise you could be stuck with that stench in your bathroom, and in your home!