It May Cost You Not to Pay Attention 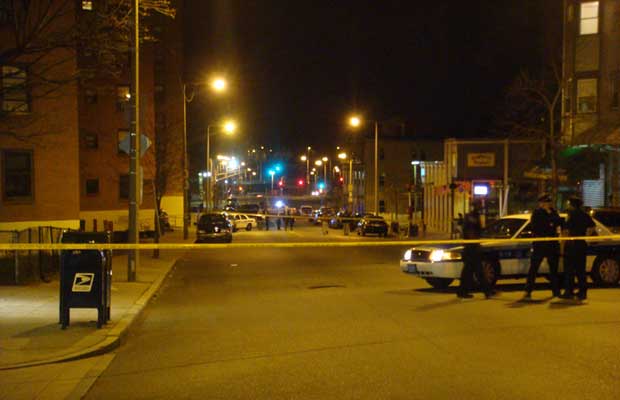 This article originally appeared on Recoil.

Situational awareness is crucial to surviving and prevailing in a critical incident. Several years ago, I was still On The Job as a Detective with the Street Crimes unit. I was also a member of the Washington DC Fugitive task Force as a Special Deputy US Marshal. Needless to say, we were very busy.

One fall Sunday evening, I happened to be off duty and working on finishing the basement in our house. Out of drywall mud, I rounded up the family and headed to the hardware store for supplies, promising a stop at the pizza joint for a quick supper.

We arrived and I did my usual “cursory” check. I knew where the back door was, kitchen access, bathrooms…I had been there before, and the advance work was quickly done. After the kids got their food, we grabbed one of the last few tables, and I made a serious mistake. It was the first time I made this particular mistake, and it will never be made again.

Playoff baseball was on and I wanted to catch up on the game and scores, so I sat with my back at an angle to the front door, primarily facing the TV.

We were about 10 minutes into the meal when I heard my wife say “These guys look like they are up to no good”: and they weren’t. They were two brothers wanted for a murder, an armed robbery, aggravated malicious wounding and attempted murder (2 counts). They were suspects in several Northern Virginia home Invasions. How did I know this? I had been hunting them for over 6 months at the request of the Homicide Unit. I knew their full names, dates of birth, cars they drove by tag, make and color, where their dope runs were, family lived, all of it….and here I was, 2 jurisdictions from mine and they found me. They had another male friend and 2 females with them; I had a S&W 342 and a reload. They all acted hinky…perhaps not gonna rob the joint, but definitely up to no good.

Mistakes? Since becoming a cop and a lot more cognizant of my surroundings, I had never before sat where I couldn’t observe the main entry or exits whenever possible. This time I got lazy. Maybe also lucky.

Here are few points that I have leaned over the years to improve your overall awareness. You should try always to remain aware, thus increasing your probability of recognizing any possible “issues” that might come your way.

Know where all possible threats could come from.

Where the problems could arise. I have worked and read about the robberies that start in the kitchen. There is easy access, the doors are sometimes propped open and they can control the staff in the kitchen first. In some restaurants the office and safe are accessible from there. If they want to “up” the evenings take, or feel that there is a possibility to control the amount of patrons in the dining room, it may spill into your area. Many customers fail to keep the kitchen in mind as an escape should they or their family need to leave in an emergency. Sit where you can see the entry and exits.

I have been guilty of requesting a different table, or waiting for a better table if I don’t like the lay of the land.  I am also VERY guilty of telling friends or companions that they are not allowed to sit in the seat that I want…most all now know this and will surrender it without question (or just offer it preemptively).

Park in a well-lit area; choose your exits, surroundings and terrain.

I generally will back into a parking spot and will position the door I need to access first to the business or area I will be returning from.  What I mean is, I still open the door for my wife, the child safety seat is on the passenger side as well. This way if either are with me, I will park with the passenger side door facing the area we are returning from. That gets them in quickly and I can protect them until the doors close, and I only have to worry about me and the problems that arise as I return to the driver’s door. She can lock the doors and call for help from the relative safety of the vehicle if I end up educating someone. I know exactly where they are, and I can work on keeping the bad guy away from them.  It’s not a bad idea to let her have the keys at that point. She can lock and unlock with the fob, operate the vehicle if something happen to me, and I don’t have to worry about my hands being occupied should I need to clear my cover garment and get to work. Sure, if they are in my hand I can scratch an aggressor with them, but I am not a cat… I have a few other, better suited solutions on me to address that eventuality.

SEE what you are looking at

As I have mentioned before, you need to think “Is that something that I would do, is that normal?”  Hot weather, a couple of dudes in masks or heavy hoodies up walking towards you; quickly determine any rational reasons, if nothing comes to mind…. MOVE. Cross the street, step into a store, create distance.  Distance is a reactionary gap. If it becomes very apparent they are coming towards you and you perceive a physical altercation, not a deadly force situation, you need to make noise and get aggressive with them. Thugs and your mediocre/average criminal will prey on easy targets. If you get pissed off and yell and challenge them as you and your family remove yourself from the situation, they may back down or run. It does happen. I realize it may not be in your nature to yell and curse and someone, but consider the alternatives. Treat them like Park Rangers say to treat a bear, make yourself look bigger and make a lot of noise. (No need to yell “HEY BEAR…HEY BEAR”.. but get creative.)  That will draw attention to you, and them, as well as the situation and they don’t want attention. Do you carry a less lethal option? Pepper spray or another option?  Remember, you will have to justify the use of pepper spray if the subject is apprehended, of you use it without justification. The charge is “Assault with a Caustic Substance” here in Virginia. Your state may have its own legalese. Make sure you can articulate why you deployed it, much like if you have to use your firearm. Have a plan for your family

THIS IS IMPORTANT.  We had one prior to the Pizza Shop incident. Once I explained to the kids that we were done eating and mom was now taking them to get ice cream (there is not fussing about leaving a pizza shop after only 10 minutes when they are skipping directly to dessert) to the point that my 7 year old loudly proclaimed “Dad, do we get under the table now?!”  Our plan was me to walk them out to the vehicle, and then I called the local PD and coordinated with them after my family was safe. As a cop, and even now, my wife knows that at some point if there is a situation, we will rally at a designated place, and that may vary depending on location and time of day. Situation dictates, and you will have different plans for different possibilities you can quickly deploy. Talk ahead of time and prepare. Keep your head on a swivel

That is something you hear said often, and by a lot of folks. It stands true, but is not understood sometimes. One popular situation; getting gas is a very opportune and popular time for robberies and carjackings. The growing trend is entry into your vehicle from the passenger side as you watch your dollars tick away on the pump. This is becoming very popular.  Think about which pump you use. Can you see the storefront, the entrance and exits of the store and those of the parking lot? Keep your vehicle secure, even once you are standing next to it, remain aware and constantly looking for problems.

Keep your face out of your phone

Think about where and when you check messages, update status or any other mobile phone or tablet. Updating a Facebook status or seeing who Liked your last one is not as important as perceiving the fast approaching threat. I watch people all day walk into busy parking lots, bump into things and walk for dozens of yards without ever looking up. The same happens at a red light. Watch the next time you are driving, there will be people who stop, start looking at their phone and don’t look up until they realize everyone else is moving, or someone behind them honks. These folks are making themselves a prime target.  If you are not watching what is going on, you will never see your attacker coming, so you will not be able to repel an attack, defend yourself or even be able to offer a description if you are not knocked unconscious, or worse.  With the internet and all the social media in the palm of your hand, it is easy to get caught up in the information feeds. Choose where you work or play from your phone – educate your children to this end.

These are a few suggestions that will help you avoid or repel an attack should you be targeted, be a better witness should it happen to someone else. There are other ways of remaining aware, and my way is A WAY, not THE WAY. Find a good system that works for you and go with it.

How did the earlier story end? I was able to get my family out and send them on their way. I met with the arriving units and gave them the location and description of the suspects, and then (since I was in plain clothes) was able to walk through the restaurant and let the other half of the arrest team in the back door to make sure they could not escape. The Violent Crimes Unit were advised that they were captured and were being transported. My pager went off shortly after that with dispatch advising they had been arrested and I needed to respond to the station, and the basement never got painted.

About the author: Matt Jacques is the training director for Victory First Consulting. He recently left the service of the Department of State’s DSS (Diplomatic Security Service), where he was the Operations Chief for FTU (Firearms Training Unit) to begin teaching full time. A former Marine MP assigned to the Presidential Helicopter Squadron, he spent over a decade as police officer, undercover detective and SWAT team member before surviving a near-fatal injury inflicted by a wanted felon that forced an end to his LE career. Following his recovery, “Jake” spent two years as the Senior Manager for Weapons Integration and Training Operations with FNH USA, where he was involved in every aspect of the SCAR program as well as all development and training aspects of the M249, M240 and the FN SPR sniper rifle systems. You can follow Victory First Consulting on the web or via their Facebook page. Read his primer on the “Blue Collar OODA Loop” here.