AR Does Not Stand for Assault Rifle 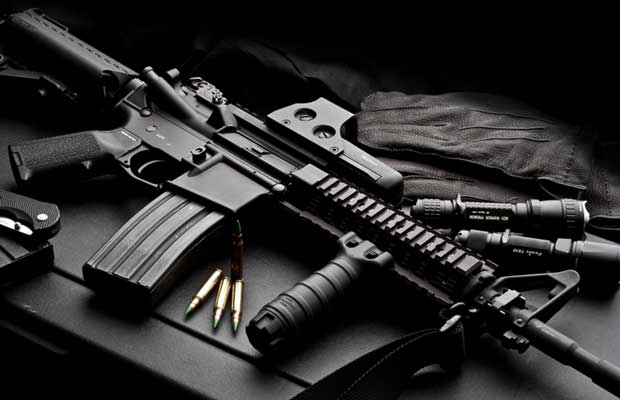 I was talking to my wife the other evening about several topics that are common to prepping. She started to make a point that in some cases, people who are into prepping either don’t show themselves in the most favorable light or outright repel others who might be interested in learning more about the subject of prepping by their actions. It all boiled down to her saying that a lot of preppers give the entire concept of prepping a bad name.

To prove this point, she said to me, “take the gun issue for example, the people who make guns are just asking for a fight by naming the most common firearm (AR15) an Assault Rifle”. This right here in her mind was a simple example of how an issue like gun control is inflamed entirely based upon a bad naming choice.

I quickly told her that what she was talking about was not correct – that AR does not stand for Assault Rifle. I had to look it up though because I forgot the manufacturer’s name, but the AR in AR15 is from the company that originally invented that rifle, ArmaLite. ArmaLite named all of their rifles AR- and then the appropriate number would follow. If you want to read more about the company you can do that on their Wikipedia page.

Naming a firearm in this fashion isn’t novel either. For instance Glock handguns are all named with a G- in the front. G17, G19, G22 and so on. Ruger has a line of pistols that start with SR and I am not sure, but I would bet that stands for Sturm Ruger (the company’s real name) (SR9, SR40, SR1911). Savage, another manufacturer doesn’t use letters in the front of the model number, but numbers (10/110, 10 BA).

Now to be fair to my wife, she didn’t know anything about these or any firearm model numbers. She only knows the weapons in our house by either the caliber (the 9 or the 40) or type, (shotgun). She doesn’t really care about the model numbers either. She knows how to handle, load, shoot, take apart, clean and reassemble every firearm we have, but I imagine she couldn’t tell you the model number for any of them, except for maybe the AR15. That is simply because it’s what we call it. I rarely ever say, hand me the .223. If I am talking about that rifle, it’s called the AR and that name has come to mean different things to people over the years.

What’s in a name

Now, my wife’s original point was valid and that is sometimes, preppers give themselves a bad name or turn people off due to their actions, but the paranoia over a little rifle is completely unfounded in my opinion. The AR15 doesn’t do anything by itself so why did it get a bad name? This vitriol is largely because of a name that was given to this rifle and a lot of other rifles actually that is inaccurate if you ask me. Assault is not something a piece of machinery can do – well, until Google creates the army of robots that will take over the planet –it is simply a machine. The AR15 or the AK47 do not assault anyone or anything. The person controlling them may, but that is like calling a baseball bat an Assault Bat because it can be used to hit someone over the head.

You could really use that term for anything that has the potential to be used to hurt someone. You could call the 8000 calorie burger from the aptly named Heart Attack Grill an Assault burger (you have to check out their website…very strange).  I had a clothes hanger get caught on the closet rod the other day as I was trying to take another shirt off and as I pulled, it sprang down hitting me in the head. Shouldn’t we call that an Assault Coat hanger? My 13 week old puppy assaults me with her sharp teeth daily. Should we call her an Assault Canine?

Why does it matter what it is called?

Calling this or any rifle an Assault Rifle has an implied meaning that it is killing people completely on its own power. “These rifles assault people and are dangerous.” BS!!!

Any firearm can be used to kill someone. They are all inanimate tools that have been created for a specific purpose that require human interaction. That purpose just so happens to be shooting bullets and we call this a weapon. Bullets destroy things when they go off usually, but that doesn’t make these specific weapons evil. To say that this rifle is more capable of hurting people than any other rifle is wrong. The AR15’s that civilians can buy shoot one bullet at a time. You can do that with a revolver, a shotgun or a hunting rifle.

There are people who say that “Civilians shouldn’t have the guns that our military does” and while I disagree with that completely, the simple fact is… We don’t. The Military has fully automatic weapons. Civilians have single shot weapons. Do they shoot the same bullets? Yes, but can we assault more people with our rifles than they can in the military? No.

My whole point is that what you may think is a bad thing (Assault Rifle) is most likely bad because you have been led to believe information that isn’t true. The AR15 is just a rifle just like that G22 is just a pistol. The number of rounds it can hold or the shape of its hand-grips or the appearance of its stock doesn’t make it any more dangerous than a knife or a baseball bat or a car in the hands of someone intent on doing evil. It is the person behind the gun or rifle or baseball bat who is dangerous.

I know there is a huge movement underway and has been for a long time to demonize these guns and the people who own them in an effort to get rid of them. I just wanted to do my small part to say that you shouldn’t fear something because of a name. If you understand that the name was created to make something seem scary, you have to ask yourself why. Why would someone give an inanimate piece of metal a scary name? If the weapons were really that dangerous wouldn’t they be jumping up and killing people all over the place by themselves?

People since time began have used fear to motivate and sway public opinion. Calling a rifle an Assault weapon and giving it human characteristics is the hallmark of someone who is trying to deceive you. Maybe it’s worth a minute to dig into what you are being told a little further. If we don’t, and the people who are trying to outlaw these weapons are successful, there will be other efforts I am sure. That Glock 22 (G22) will have some evil title associated with the first letter of it’s model number just like the AR was turned into Assault Rifle. Are you ready for the call for banning whatever word they come up with for those G-named pistols? Oh, Gun…

Most excellent P! I happen to have a AR10000BC in my arsenal…. an assault slingshot. 😀

Thanks Todd! That was pretty funny… milk came out of my nose when I read your comments!

Pat, enjoyed reading your explanation on the AR, I knew the naming nomenclature but it was great to read it in detail. I’ve disassembled my machine many times and marvel at the detail of it’s design and manufacture. That is kinda of my nature, love to see how mechanical things are made… One machine that I haven’t heard mentioned is the lowly air rifle, I have one and have hunted with it many times with eating results. What do you think of this type of Weapon?

Thank you very much Inganear! I think the air rifle has a place but where depends on the air rifle you are talking about. Growing up and even now I have a crossman pump type that takes BB’s or pellets. The pellets in that could easily take out a squirrel or a bird, but not much else. I have heard of higher power models but I am not as familiar with them. I would think their strength is in the quiet operation. A .22 to me though seems to be a better all around choice that will kill the same… Read more »

By the way the new site and layout are amazing, congrats!

Thank you very much Jereme! We are still tweaking it but I am really happy with the results so far.

It really doesn’t matter how anyone “feels” about the ownership of firearms or the separation of military and civilian types of weapons. It’s protected by the Second Amendment…well, that was the original idea. Furthermore, in 1776, civilians did own the same rifles that militaries owned and private citizens owned the ships and cannons that were used to defeat the British.

Thank you very much! Hope you visit again soon.