Up until a toxic chemical oozed into the Elk River in Charleston, W. Va., last month, we thought most pollutants could be smelled, seen or tasted. We were wrong.

West Virginians are apparently fortunate that Crude MCHM (4-methylcyclohexanemethanol) smells like licorice. Otherwise, no one may have noticed the toxic chemical seeped into the public water supply.

Since Crude MCHM is stored in tanks just a mile and half upstream from the city’s water source and is commonly used locally in coal mining processes, I was shocked to learn the company supplying Charleston with water does not test for it.

My subsequent research showed me how naïve many of us are concerning water testing and purity. Those of us with private drilled wells may be the most complacent.

The company responsible for the Jan. 9 spill, Freedom Industries, has since filed for bankruptcy and did not disclose until many days later than a second chemical, a compound of polyglycol ethers, also leaked into the Elk River, affecting 300,000 city water customers. Freedom Industries allegedly knew about the second contaminant, but kept silent to protect trade secrets regarding the compound.

That odd licorice smell, however, prompted many folks to notify officials who ultimately solved the mystery and traced its source.

I have since learned water contaminants aren’t apparent to us. Many of the most serious problems can only be detected through lab testing.

Curious, I visited our county health department to find out what it tests for when we submit a water sample. Surprisingly, only two things are tested for – coliform and E.coli. Both are potentially dangerous bacteria that can make folks very ill, but there are a host of other common contaminants not tested for.

The test through our local health department costs just $10. Perhaps that’s why I assumed water testing is a simple process. I pictured technicians dipping in one strip of litmus paper and producing a spreadsheet of results.

That is not how it’s done at all. Separate vials, reagent pads and bacterial growth powders are needed to test for additi 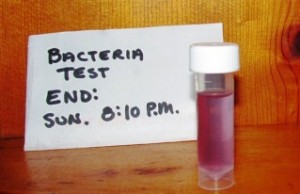 An online search revealed a broad range of costs and contaminants tested for, varying between states and even counties. The Greene County, Mo., Health Department, for example, where Springfield is located, charges $13 for a standard bacterial test, but offers additional tests for chlorine, hardness, iron, nitrate/nitrogen and sulfate for $8 each. Our county does not offer the additional tests.

In places where certain contaminants are more likely to exist, county health departments will test for their presence, such as zinc near industrial mining or gas near fracking operations.

The EPA now recommends that well water be tested at least annually, more often in areas where pollutants are more likely to enter the water supply, such as in large agricultural or mining areas. Other factors, such as drought, increase the opportunity for contaminants to enter a well.

Since we had only ever tested our water once through the health department, we decided to buy a home water test kit. After some quick online investigation, we ordered a First Alert well water test kit. It cost less than $20, arrived in a few days and can detect eight common contaminants.

Because our home was built in the 1960s, I wanted a test that can detect lead. I was surprised to learn that even homes built after 1998 may contain an allowable percentage of lead in the plumbing pipes. 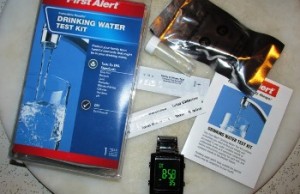 Performing the tests for seven of the contaminants took a total of about 15 minutes. The bacteria test sat out on the counter in a vial for 48 hours.

The kit was remarkably simple to use. Just dip the litmus strips in a water sample from the faucet and wait the allotted time. I kept track of time with a kitchen timer for the 10-minute lead/pesticide test, and a stopwatch for the 15-second pH/hardness/chlorine test and 1-minute nitrate/nitrite test. Then, verify the results against the color-coded desired values.

We are happy to report our water tested negative for all eight contaminants. The First Alert package includes a disclaimer that the “kit provides approximate results ONLY” and “cannot be used to certify water as safe or unsafe.”

Still, this quick test gave us peace of mind. Do you know what’s in your water?

The good news is that home water filter systems are continually improving as more chemicals are created that can pollute our water sources. For more information, visit Highwater Filters.

To read more and see more photos, visit our blog.