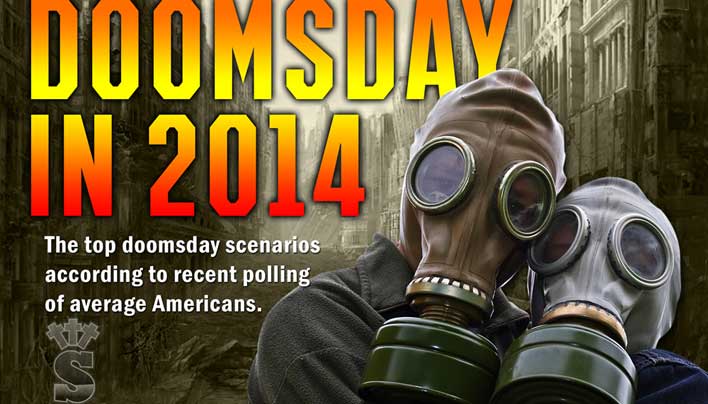 Editors Note: I received this infographic from our friends at Rising S Bunkers, who specialize in underground bunker installation and fabrication. They conducted their own poll that questioned what average Americans believe could lead to a doomsday situation in 2014. The results are displayed graphically below.

According to Charlotte from Rising S Bunkers, America has seen a growing trend of those who are preparing to survive a doomsday situation. These ideas are becoming more mainstream as successful TV shows like Doomsday Preppers are shedding light on these concepts. The world seems to be facing a growing list of threats to try to contend with. We are seeing an expanding trend of average Americans taking steps for preparing their family for a doomsday situation. Recently, there has been a surge in the underground bunker market that indicates more Americans are preparing for a doomsday scenario.

A public poll was taken to find out what every day Americans believe to be the greatest possibility for an epic doomsday disaster in 2014. The results are displayed in this Doomsday Infographic from Rising S Bunkers.

My vote is for #4 leading to #1. Perhaps aggravated by coinciding with #2. (take that either way)

#2… Are you being funny Larry? I laughed anyway even if you weren’t.

Larry made me laugh to, but I admit I was thinking to myself – wouldn’t #1 be a cause for #3 happening or visa-versa? And aren’t #2 #4 and #5 all natural disasters? Maybe people associate weather events only as natural disasters.
Sadly (or maybe it’s funny), another natural disaster would be Pandemic, which is apparently a more likely event than any of us want to realize (out of sight out of mind kind of consideration).