What to Expect At the Gun Show 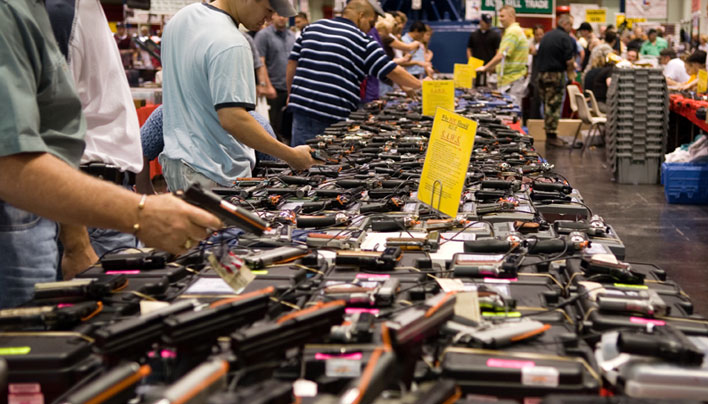 I love going to gun shows and I try to visit them every time they show up in our town. The only exception is when I am already planning to do something that weekend or the big sign on the convention center escapes my attention somehow.

Gun shows are a great place for preppers and you can get your hands on a lot of gear that you have been looking for. Before I went to my first gun show though I had some ideas that over time have been proven a little, well wrong.

I wanted to share my experience and perspective with you in case you are thinking of going yourself to a gun show. Rather than doing what I did and wasting precious time on the wrong things I wanted to give you my experience with what to expect at the gun show.

Gun shows in my neck of the woods are on weekends which are really perfect for me. The shows run on Saturday and Sunday and people from all over are represented at the show. Exhibitors purchase booth space to sell whatever they want and this extends to a lot more than guns.

You will have vendors for leather holsters and belts, jewelry, precious coins, holsters, ammunition, and even freeze-dried food just to name some of them. You get hundreds of small groups of people in there with things to buy, sell, or trade that is very interesting and valuable to anyone who is into prepping.

The booths that each exhibitor is set up at are really just tables which makes scanning the scenery a little easier than booths like you would see at a trade show. There are some tables that are a little more decorated but for the most part, everyone’s items that they are selling are simply displayed on the type of tables you would see at a church social.

A lot of the firearms dealers have fancy cases that I assume would just ease transporting but everything, for the most part, is laid out for anyone to see and touch.

What I try to do is have a shopping list of items I am looking for. The gun show is a great place for some items that I need as part of my preps, but not all. I have been surprised though at a few shows and bought something I wasn’t expecting but primarily I go there for guns or gun accessories, ammo, or military surplus items. I’m not saying I wouldn’t buy other items, but those are the ones I am most interested in and I think you can get a reasonable deal most of the time.

Once you know what you want to get, it is important to shop around and know the prices you are going to pay. One of the misconceptions I had, when I went to my first gun show, was that I was going to be walking into a place where I could get 20-30 percent off wholesale pricing and that isn’t the case at all.

Each one of the exhibitors at the gun show is in business to make money so they are going to try and get the best price they can for everything they are selling. Especially if the equipment is new. Don’t assume that you can’t get ammunition cheaper somewhere else or you could end up paying quite a bit more. Money that could have gone to some of the other items on your list of prepper must-haves.

For Ammunition specifically, I first have an idea of what I need by consulting my ammunition inventory spreadsheet. This way I focus exactly on what calibers I need. Then I will shop online to compare prices.

For example, if I can get bulk handgun ammo at someplace like SG Ammo or through an Ammo Club cheaper, it would make more sense for me to purchase that way. If I want to buy a firearm, I can check out Gun Genie online to see how much I can get the same firearm at local sellers near me. For me, this is like buying a car. You have to know what you want, decide how much you are willing to pay and then you get to shop around for the best deal.

How to navigate the tables at the gun show

At our gun show, the event itself is in a large exhibit hall. This is where the crafts are displayed from the annual Fall Fair in our town. It is a large open space and the tables are in rows running the length of the building.

Once you pay your admission fee to get in, you will be greeted by a lot of options. When I go to a gun show, I want to look at every single vendor there because you do find some gems if you are looking. In order to make sure I don’t miss anyone, I start at one corner and then just start walking up and down every row until I get to the end. If I see something I want to purchase or consider for a while, I will do this entire process a couple of times.

Most vendors are very happy to let you touch the merchandise. Any who aren’t will usually have clearly written and prominent signs stating that you should not touch or usually they say they will assist you with anything you want to see. I usually see signs like this on very nice leather work (belts, holsters) and some of the high-end firearms like the Barrett 50.

For the leather, I imagine that the signs may be to prevent theft. For the Barrett’s, there is little chance you can steal it, but I wouldn’t want to break a firearm that costs more than a couple of my first cars.

If you are looking for a gun, most vendors have their guns grouped by manufacturer so if a Glock 27 is on your shopping list, you will usually find them quickly if the vendor is carrying that model. Not every firearm vendor has the same selection and pricing between exhibitors is pretty competitive.

If you are looking to buy, I would first find a vendor with the model you want. They will be very happy to answer any questions you have about the firearm and let you hand model it as much as you want. Each firearm has a price listed on a tag, but this is almost never the final price.

Ask them for their best offer and they will usually take some off the price you see. I have seen them take as much as 15% off. I would write this price down or get them to write the price down on one of their cards and keep looking.

You can easily find 5 other dealers selling the same weapon and I would ask them the same questions and get the same best offer. I have done this twice and on one occasion the price I got on a Ruger .380 was almost $100 better than another offer. The second time I was looking to trade a Beretta Mini Cougar. One vendor would give me $100 in trade and another would give me $290. There were differences in the final cost of the weapon I was looking to trade up for, but the point is you have to shop around.

Once you have the best offer, I would still go back and let the other vendors try to counter if you have the stomach for that. In some cases, to make a sale, exhibitors will beat the low price you have and you come out with an even better deal. Often they will match the price or throw in a cheaper accessory like an extra magazine. Either way, it’s worth it to go around informed with prices and let the companies try to get your business.

What to Bring to a gun show?

It used to be that you had to bring cash to a gun show but now so many people have iPad’s or iPhones hooked up with devices that can take credit cards. If you run into someone who won’t accept a card, ATM machines are usually outside or close by. They do not want you to leave the grounds and re-think your purchase. Some people choose to make purchases like this with cash and that’s perfectly fine. Cash is always accepted. I don’t know that anyone would take a check, but then again I haven’t tried.

If you want to purchase a handgun you will either need a Concealed Carry permit or a license to purchase from your state. Rifles are different in a lot of states, but handguns require more paperwork (for the privilege of purchasing). Regardless of your state, it’s your responsibility to know the law on purchasing firearms before you go to the gun show unless you want to come home disappointed.

What kind of people go to gun shows?

I expected to see a lot of cammo and scowling faces when I went to my first gun show a long time ago, but it is nothing like that. You will see the occasional Tactical Hoo – Rah’s walking around and a healthy dose of camo, but it is usually the hunting variety, not the military kind.

People from all walks of life are represented and I frequently see more and more women there. The audience is young and old, all colors and races share the same interest in guns so it isn’t like the crowd is going to look at you funny if you walk in and don’t have a T-shirt with the Gasden flag on it and an AR slung on your back.

These are mothers and fathers, businessmen and homemakers who have a common interest in things that go bang. You’ll have a great time if you go.

Thank you for telling us that it is very important to walk around and compare prices before making a purchase. My husband has been really wanting to go to a local gun show. I have never been and don’t know a lot about these gun shows. I think it would be best for me to do some research before committing to going to one. I hope we can find one close that we can both enjoy.