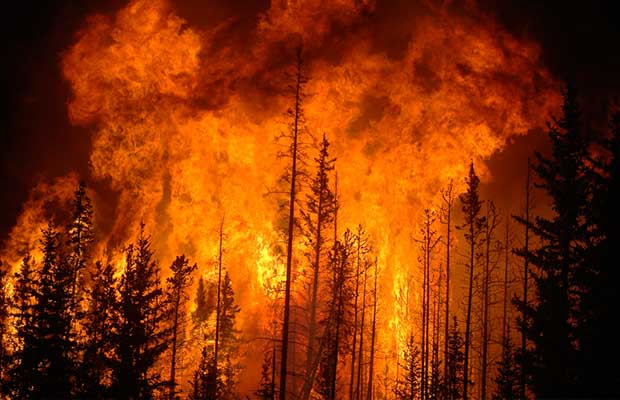 Fire Safety, Before and After the Fan

Fire safety is something I think everyone should be practicing now when times are normal and you’re not in a survival situation, so that you can prevent or minimize the danger of a fire. In a survival situation, the danger of a fire starting and the damage it can cause are magnified. The reason for this is that people who do not normally use candles, their fireplace or other alternate heat sources, use a skill set they have minimal experience with. Depending on the situation you may or may not have electricity and if you are connected to city sewer and water, there is a very good chance you will not have running water.

Here is some information to help you develop a fire safety plan now as well as some things to keep in mind should you find yourself in a survival situation.

Ideally every room should have two exits, a door and at least one window. In multiple story homes have a plan to safely get to the ground. Make sure everyone knows to check the door for heat with the back of their hand and to not open it if it is hot.

School age children have to do fire drills often multiple times a year at school. Doing them in the home is a great idea as well. Explain the primary exit and the backup ones. Make sure they understand how to unlock the window and get it open as well as getting the screens out of the way.

Have a designated meeting place that is near the home; a neighbor, mailbox, anywhere that is a safe distance from the fire. Make sure everyone knows where it is.

Here is a report that says that ”Only 58% of kids even woke up to the sound of a fire alarm.“. There are fire alarms that record your voice. This is a great idea, as you can say the child’s name and remind them of what they are to do.

Fire extinguishers are not meant for fighting a fully engulfed fire. They are a great tool for fighting small fires, shortly after they have started.

Here is a video to give you some idea of how fast a fire can spread.

Here is a video that covers the important information about fire extinguishers.

Be they family photos, wills, insurance papers or anything else of importance, it is a very good idea to have these kept in a fire resistant, waterproof container. Another good idea is to have a record of all serial numbers, model numbers and other pertinent information. Here is a Serial Number Recording Form that I created in PDF format. You can write down the important information for your valuables. I also recommend taking pictures of your valuables. You can store them on a flash drive that you use solely for important information. It should be kept in the fire resistant waterproof container.

Post Smelly Fan Blades (aka. “after it hits the fan”)

In a survival situation, the danger of a non-controlled fire is much higher. The reason for this is that often the electricity will be out and there will be no heat or light. This means that people will use alternative heat and light sources that they might not use often, such as candles, outdoor fires etc. The other reason the danger is higher is that if there is no electricity, there is no water pressure to help fight the fire.

In a short term situation, just practicing extra vigilance should be all that is needed. Make sure that if there are candles going, they are being used in a room that you are in and are not left unattended.

For an outdoor fire, keep burning restrictions in mind; if it’s too dry and windy, it might be best not to burn. If there are no restrictions and the weather is permitting, having an extinguisher nearby is a good idea. If you have a well or the water is running, a close by hose might be a good idea as well. Remember, as Smokey the Bear says “If it’s too hot to touch, it’s too hot to leave”.

If the situation is long term and there is no power, prudence might dictate that the scope of the vigilance be increased. Work with your community to limit burning to a few community areas or have a fire watch posted that can alert the entire community if smoke is seen.

At the Minnesota Renaissance Festival, fire “destroyed six and severely damaged about 25 booths on the grounds” I bring this up because there are no fire hydrants on the festival grounds and if there is no electricity, this means the pumps are not pushing water to the fire hydrants nearby your home, so they are useless. In the article, it says that at one time there were twelve fire trucks being used to put the fire out. If it has hit the fan, the best your neighborhood might be able to do is get a bucket brigade going and that’s only helpful if you live near a body of water or have a large amount of water available such as a swimming pool or multiple rain barrels.

As in everything we prepare for, in a long term situation, it might be wise to do what you can to mitigate the danger beforehand. I read a fictional story once, the name of which escapes me. In the book, the characters knew they were at high risk for a fire. They took some pretty drastic measures to save their homes. They cut down any trees within 50 or so yards, dug up grass near the homes which left the earth exposed. I don’t think that I thought much about it at the time, but if there was imminent threat of a fire, who knows what might sound like a good idea.