The other night my wife and I watched World War Z. I had been putting off seeing this movie primarily due to some reviews I had heard that painted this movie as a giant piece of propaganda for the UN. I had up until that time, wanted to see this movie when I first saw the trailer because I love movies like this (zombies, c’mon!) and was a little bummed that I shouldn’t because of “bad stuff”. Going solely on this one review, I quickly got over my excitement at seeing zombies get wasted and  forgot the movie existed. I know, I know; what movie doesn’t have some form of propaganda these days?

My wife on the other hand wanted to watch the movie just to make fun of this supposed propaganda and to see how bad it actually was. I had told her what I heard and she rented the movie anyway. I was prepared to scoff and hate World War Z the entire time, but quickly found myself engrossed in the story. This article isn’t a review of the movie, but I did enjoy it if you were wondering. What made me want to write this article was one line out of that whole movie. There was a single line in World War Z that struck me as incredibly poignant and nicely packaged some concepts that we as preppers have been discussing in one way or another for a very long time.

The line was said by a man in Israel to Brad Pitt’s character whenever Brad asked him why they(Israel) were letting every human into the city through giant gates they had erected to keep the zombies out. The man’s reply to Brad was “Every human being we save is one less to fight”.

I thought that was brilliant and wrote it down immediately and then tucked in to watch the rest of the movie. As preppers, I can’t think of many more appropriate sayings to describe how I think we should be interacting with our fellow humans and looking at our role in society.

Too often survivalists and in some cases preppers as well seem to have a mentality of  when the poop hits the fan it’s gonna be them against the world. I think they plan to be the only ones who come out of their underground bunker to view a charred landscape about 2 hours after the end of the world. Having been the only ones who made any type of preparations, they would start planting their garden, after moving the rubble of course and set up their sustainable homestead in which to repopulate the earth. This is dangerous thinking for a few reasons but I’ll just stick with the most obvious for now and that is there is strength in numbers and to shun other people is foolish. So foolish in fact, it could be your undoing. 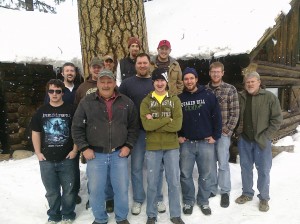 Isn’t it better to bring everyone along if we can?

You almost never want to find yourself alone in any situation where your life could be in jeopardy. Actually, I can’t think of any situation where if knowing you would be faced with adversity you would willingly shun others. If you were on a hike into a remote spot in the woods, does any expert recommend going out there by yourself and not letting anyone know where you are? When you go scuba diving, you have the buddy system in case one of you gets in trouble. In the army it used to be called your battle buddy. There are dozens of examples, but common sense would tell you that the more people you have in a group, the more you can accomplish and the safer you would be. If you have a large group, the work is distributed, the skills are more varied and the load is lighter when more people are helping. Are there examples of solitary activities? Of course, but if something bad happens do you think that Aron Ralston who had to cut his arm off with a multi-tool wouldn’t have wished for a little help moving that boulder? Maybe.

Planning to go through any event like TEOTWAWKI or even something as relatively minor as a storm alone on purpose isn’t smart. I always want to be able to count on people to help me out if I get in over my head or even if I don’t. In return for that I would do the same for them. Helping others is one of the most human traits we possess. For this reason a lot of people I talk to are asking me how to meet other preppers or how to build a prepping group. The interest is there, but many people don’t know how to begin going about the steps you would need to take to grow a larger team of people who could support you.

Be a modern day Paul Revere

So how can we try to ensure that we save every human we can? Maybe we could spend a little less time looking for people to make a survival group. Maybe we should focus instead on how we can teach others to be prepared. The old adage, teach a man to fish and he’ll eat for a lifetime comes to mind. If your neighbors have a garden, some means for self-defense and some food saved up will they be more likely to help you if the grid does go down? To look at this another way, what if you had 10 friends who wanted to be part of a survival group with you, but had made no preparations themselves. Would you rather have your 10 friends who had nothing but knew you were prepared coming to your house if the SHTF or your neighbor who was already on their way to take care of themselves?

Maybe this is too Pollyannaish to ever happen, but I do think that if we could save more people in the respect that we could make them self-reliant, we would have less people to worry about if anything bad happened. I plan to talk to more people about prepping, not with the goal of getting together a big group, although that is what you would eventually want to achieve. My goal is to have everyone able to take care of themselves so that the people who could actually be in your group could come from anywhere. Wouldn’t it be better if every family on your street could take care of themselves whenever something happened and then band together to defend the larger group if needed?

Just a thought I had after watching some UN propaganda.