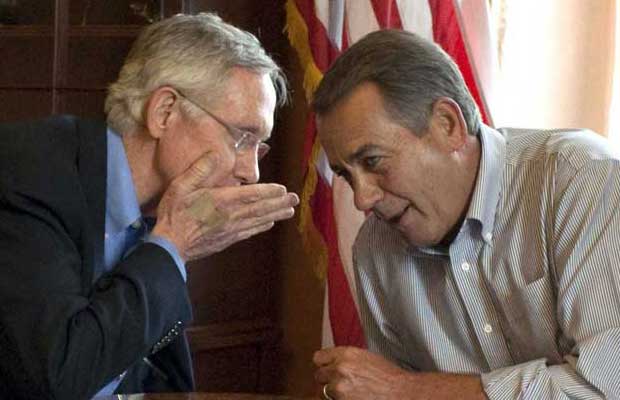 This may be a short post but the news yesterday of collusion between the Speaker of the House, John Boehner and Senator Harry Reid’s office on Congress’ ability to dodge some of the pleasantries offered to the rest of us from Obamacare prompted me to try and reach out to those who may still hold out hope of saving the world politically. If you seriously still believe that either party is fighting for your best interests, you are delusional. This isn’t surprising to me really; actually I am more surprised that they leaked this news, but it is a small nugget of proof to those naysayers who steadfastly maintain the purity of their party.

During a five-month period stretching from February to July, Boehner and his aides sought along with Reid’s office to solve what had become a big headache for both of them [the fact Congress would lose their employer contribution for Healthcare]. They drafted and reviewed a possible legislative fix, as well as continued to push for an administrative one from the Office of Personnel Management.

Boehner aides insist there was never any intention to move legislation through the House to correct the problem. McConnell was also opposed to any legislation approach to the controversy, said spokesman Don Stewart.

Boehner and Reid, however, went so far as to ask to meet with President Barack Obama to lobby him personally for help — using a cover story in order to protect the secrecy of the discussions, according to these documents.

This isn’t an attack on Republicans or Democrats because I believe that false argument is the heart of our problem. Our nation’s political reality is that there is no two-party system. The fact is that all politicians, no matter what initial is behind their name, on both sides get money from the same special interests. All politicians have been associated with good and bad people and just like “Professional” Wrestling, there are no arguments when these two opponents get behind closed doors. The Republican party and the Democrat party are perceived as opposing groups who have different philosophies and values. They have been created to make us believe that each, on every issue caters to your values when the truth is they are all for sale to the highest bidder and the only allegiance they have is to power.

The sooner we as a nation realize what a sham our political theater is the better off we will be. There is no point sending money to either party in an effort to get your ideals promoted; to do so is to throw your money away. We will never be able to spend as much as the banks, investment firms and corporate conglomerates do when it comes to politics and this really has nothing to do with Campaign finance reform.  If you are a politician and you have received millions from JP Morgan, do you think you will stand on the side of the “common man”? No, there is no true reality that can be derived from the two party system unless that reality is that this is all a charade, the politicians are actors on a stage and we are all being played for fools.

But you can’t sit there and do nothing because if you do they will ruin the world! Right. I used to think that too and it animated me to do things for myself. I used to think my vote counted, but when there is so much widespread election fraud,  believing your vote counts is out the window too. But you have to protest and let your voice be heard! Sure, I also used to think we should just go to a representatives town hall meeting and let our opinions be heard by our elected officials until they stopped having them and stopped taking questions. Now they will simply vote in direct contradiction to our wishes.

So what am I saying?

Personally, I checked out of politics a pretty long time ago. At one point in my life I volunteered for a local Senate campaign and called people asking for their support on election day. I used to be a die-hard Republican and I would toe the Republican line on almost any issue. As I learned more and saw repeatedly how our faith was abused, I grew more skeptical. Eventually, I would hold my nose and vote for the nominee regardless of my distaste for the person’s character. I realized that that not only does that not achieve anything (even when your side wins) but it betrays who I am. Our two party system prevents me, in a lot of cases, from voting for the candidate I truly want to win. Debates are rigged to eliminate alternate views. If you only get to choose between two people that someone else wants to win, is there even any point?

There is a lot of energy in politics and political issues and for me it is wasted on the national level. It doesn’t matter who wins, rules are broken and even outright ignored or changed by the Supreme Court. Our nation is not a nation of laws anymore, it is a nation of lawyers who will fight and rip apart issues to construct new realities that were never envisioned by our framers. I might care more if I thought there was a chance to salvage anything, but I don’t. When 9 people get to overrule a country we don’t have a system that works anymore. I am not giving up on our country, but I am giving up on our politics because I think that we are so far down a path that nothing will change. Even if you replaced every single politician in government nothing would change. And that drastic of a political shift my friends isn’t going to happen at least not without disastrous causes or consequence.

What can I change?

I can change how I act and what I spend my energies on. I can worry about preparing for my family and making sure we have a plan regardless of what happens in Washington. I have found a new skepticism in all news so I rarely believe the first pass at major stories because the media too has a way of trying to shape your opinion to theirs. I won’t be watching or participating in elections to a great extent unless a candidate I believe in is running. I stopped voting straight ticket a long time ago and I am seriously considering changing my party affiliation to remove any connection to the Republican Party anymore. Is that just a meaningless gesture? Maybe, but it is honest to me which is more than I can say for almost anyone in Washington right now.

Interesting to see this post today. I have been thinking this way the last few weeks. I am also considering a party affiliation change. At this point, the die has been cast for this country. The only real choice some of us have is at the State level. We need to seek out and elect strong Tenth Amendment candidates. Ones that will stand up to Washington for us! If he or she can’t be found, then we are screwed!

Thanks for the comments SEKPrepper!

My Disqus is on the fritz for some reason tonight so I still have to get that fixed, but wanted to reply. Local politics I agree are your best bet. That might still leave you some hope when the politicians are likely to run into you at the local mall. When the folks in Washington leave home, they change and its never for our benefit it seems.

If the child is dirty, we don’t throw ’em out. We clean them, put on fresh clothes, and learn some lessons. When we get beaten in the football game because the other team was better, even in loss we can hold our heads high. But if we give the game away by refusing to play, refusing to be fully in the game, then we truly lose and should hang out heads low. Yes, the coach sucks and some of the players are just in it for the show. But there are more that stand on your side that are ready… Read more »

Thanks for the sentiments Len and I get the analogy. My reply though is that this child isn’t just dirty. They are conspiring with the other kids in the playground to take your freedom, rights and money away. If you don’t like it, they will call you racist and/or a terrorist and eventually target you for some other bad things. Even if you go along, they are perfectly content to spy on you and use any information they can get to punish you. You can try to spank them, but in response they will lock you in jail. I don’t… Read more »

a big help will be if somehow we get term limits on all elected officials any politician in too long gets too used to the power and prestige , state local and federal it happens and yes we will lose some good but when i hear a politician almost senile say i been here in DC for 30-50 yrs i know what my district needs i know he has not got a clue whats even going on at home because hes usually around political hacks an lobbyists

I agree that term limits would help, but I have low confidence that the very people we want to limit would approve that in the legislature.

Term limits already exist: your vote against any candidate who’s already been in office too long. That candidate loses. His or her term is thereby limited. Baste.

> … We will never be able to spend as much as the banks, investment firms and corporate conglomerates …

> … do when it comes to politics and this really has nothing to do with Campaign finance reform. …