Why We Don’t Eat Processed Foods 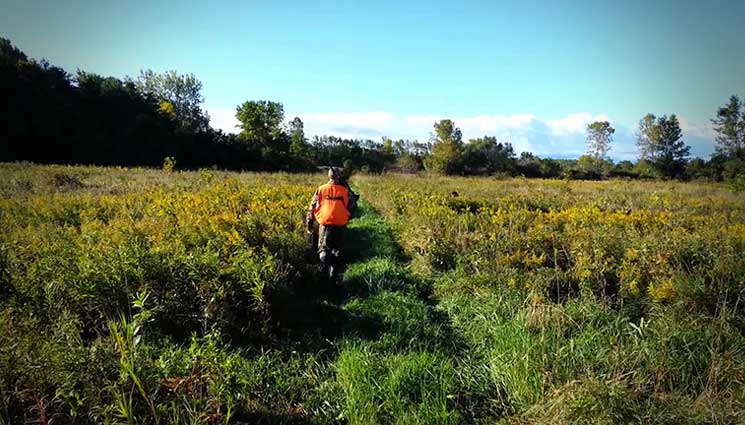 My mother practically raised my sister and me in the woods, teaching us to hunt for game, what mushrooms were good to eat, how to fish and catch frogs, and find all sorts of wild berries and fruit to eat. I realized many years later that all that hunting and gathering kept us fit and healthy.

Our groceries were not sprayed with toxic chemicals, radiated, wrapped in plastic, injected with hormones or genetically modified. Perhaps it is a coincidence, but I maintained perfect attendance from kindergarten through eighth grade.

When we were young, Mom pulled us in our toy wagon over plowed cornfields and through waist-high grass to the woods every fall. With snow on the ground, we took the sled. Mom would be on the lookout for a springy tree curved like a fly rod hauling in a catfish.

Then Mom set down her 20-gauge shotgun, the one with the modified stock to fit her short arms, and she’d climb the tree to demonstrate the tremendous fun of bouncing on the limb or swinging upside down from our knees. As soon as we got the hang of it, she’d grab her gun, call her beagles and head as far away from us noisy kids as possible.

Sometimes we picked hickory nuts, apples, mulberries or blackberries while Mom hunted. Or, we caught frogs and crayfish for supper. After an hour or so, Mom always silently reappeared from the woods with her daily limit of rabbits and squirrels stashed in her canvas vest pockets.

Penciled inside one of her old wild game cookbooks, Mom kept a tally in the 1960s of how many squirrels and rabbits she got each year. One time, she got two rabbits with one shot as they were running side by side in front of her beagles.

Dad favored hunting pheasant, ruff grouse, duck, geese and partridge. We also had at least one deer every year, sometimes two. We didn’t process venison ourselves, but took it to town to be made into sausage, steaks, roasts and burger. One monstrous Wisconsin whitetail buck lasted our family all winter.

My mother cooked every wild animal except possum and got even better through the years. A regional favorite, although not with me, was coon stew, cooked like chicken until the bones dissolved. I preferred fried rabbit and squirrel soup with fresh veggies.

To prepare snapping turtle, Mom hung it from the clothesline overnight to drain the blood. Mom simmered the entire turtle, shell and all, in her canning kettle until the shell fell easily apart, exposing the meat.

We spent unnecessary time removing fish scales until a neighbor taught Mom to make boneless fillets by pulling the meat from the backbone. Mom traded him squirrel tails to make fishing flies in exchange for small-mouth bass. A good trade, no?

My absolute favorite wilderness adventure was coon hunting. On school nights I got very little sleep, as we didn’t head out until after dark. When it was finally time to go, the dogs would be yelping and jumping out of their skin with excitement.

When Dad opened the dog pen, away those crazy hounds bounded. As we walked over frozen corn stubble after the dogs Dad and I talked quietly, probably about the hunting days of his youth or a special dog. We would walk a bit, and then sit by a tree and listen for the dogs. I don’t remember every being bored or cold, even though we sometimes waited hours for the dogs to “strike” on a scent.

Raccoon are uncanny and will jump through the treetops, swim upstream or backtrack to fool the dogs. In time, I could distinguish the dogs’ barks as they worked. When we heard them bawl at a tree in the distance, we’d hurry through the dark woods, pushing aside brambles and jumping over fallen trees.

Dad wore a metal miner’s hat with a flame that smelled like sulfur, but wouldn’t light it until we reached the tree. Nights were brighter with snow or a full moon, but I loved the thrill of hurrying through the woods. My very important job was to shine the flashlight up in the tree for Dad to get a clean shot. We’d get home very late and I’d slip off to bed while Mom skinned the three or four coon we’d gotten.

I missed wild game after joining the military and once brought a bag of my mom’s frozen rabbit with me from a trip home. I crammed the meat into the plane’s overhead compartment for the four-hour DC-10 flight to San Diego. Somewhere over Utah, a passenger seated in front of me shouted, “The plane is leaking!”

A stewardess hurriedly opened the overhead compartment as other travelers turned to see the commotion. There she discovered the source of cold, pink dripping water. When I told her about the rabbits, the gracious stewardess found a sturdier plastic bag for my wild game. Flight attendants must be trained for any situation.

Mom gave up hunting at age 60 and began eating store-bought beef, pork, chicken and produce. My mother, who used to tromp five miles through deep snow to bag a single rabbit, now has high blood pressure, high cholesterol and diabetes.

I realize her lifestyle is different, but so is her diet. She believes (from TV commercials) that her ailments are simply a part of aging. No amount of encouragement from me for her to eat as she did years ago can convince her.

My husband, Darren, on the other hand, was raised in big cities and ate store-bought meat and packaged food all his life. By age 40 he developed high blood pressure and cholesterol and a whole host of medical problems including osteoarthritis. But, instead of taking the prescribed medication, Darren decided to learn about the consequences of eating processed industrialized foods.

Darren began shopping at health food stores for locally-raised, organically-grown meat and produce. He also began growing a garden. As months passed, Darren gradually became healthy and lost weight, and has remained that way ever since. He can now hand pump 1,000 gallons of water a day, split huge piles of firewood and work like he did 20 years ago.

Looking back on my family’s years of hunting and gathering, I am certain we stayed fit and healthy because we ate from the land. Darren and I don’t wade through creeks to catch frogs or hike miles for squirrels as my mother did, but we grow as much organic food as possible all year, eat much of it raw, and do many of our chores with human muscle.

For us, good health is an important aspect of preparedness and self-reliance. To read more and see more photos, visit our blog.