The universal truth when dealing with traumatic injuries is that whether from effective treatment or loss of supply, all bleeding eventually stops. Having the knowledge to treat major bleeding can be the difference between life and death at any time, but especially during a disaster when emergency responders may be delayed or not available at all.

The two major components of stopping blood loss are knowledge and equipment. While the principles outlined here are not new by any means, it is important to point out that over the past 10 years of active combat overseas, the technological advances made in the practices and equipment used to stop bleeding have been remarkable. None of the information provided below is a substitute for formal training. It is encouraged to seek professional training and only operate within the scope of your expertise.

Types Of Bleeding And Classes Of Hemorrhage

There are three types of bleeding (hemorrhage): arterial, venous and capillary. Arterial bleeding is caused when there is damage to an artery that is carrying blood directly from the heart. It can be summed up as bright red bleeding that spurts with every heartbeat. Venous bleeding is from a damaged blood vessel that is carrying blood back to the heart and is usually a darker red with a steady flow. Capillary bleeding comes from the smallest vessels in the body and is characterized as oozing.

The severity of hemorrhage is divided into classes to define the amount of blood loss and serve as a guide in treating shock caused by the loss.

When conducting medical training, a good way to obtain a grasp on the severity of bleeding and the classes of hemorrhage is to mix water, red food coloring and cornstarch to make fake blood. This mix can then be measured into the desired amount (i.e., 500 mL to represent Class I Hemorrhage) and poured onto various surfaces to gain an idea of what it looks like when a casualty is injured and is bleeding onto the pavement, dirt, floor, etc.

Tourniquet: A tourniquet is composed of three basic components; the strap portion, windlass (crank) and a retention system. The critical aspects of treatment with a tourniquet include appropriate size, proper placement and effective pressure. A commercially manufactured tourniquet will meet appropriate size requirements. Improvised tourniquet standards are outlined below. Proper placement of a tourniquet mandates that the tourniquet be on the injured limb, above the wound at least 2 inches and preferably over a long bone (the thigh or the arm above the elbow). Effective pressure will be achieved when the windlass has been turned until the bleeding stops. If the situation allows, dress the wound with bandages after the tourniquet is in place.

It is recommended that once a tourniquet is in place that it not be removed. It is also possible that if one tourniquet is not effective, another one can be placed above the first. The goal should be to do what it takes to stop the bleeding and minimize blood loss.

Note that a tourniquet should be used only in the event that there is bright red bleeding. This is bleeding that is continuous and from an artery, usually indicated by a spurting action from the wound. If the bleeding can be controlled by any other available means, a tourniquet should not be used.

Wound packing: Packing a wound can be done with many different materials, but the principle remains the same: Place a dressing into the wound to completely fill the wound cavity and initiate clotting of the blood. After a wound has been packed, a bandage should be placed over the wound packing to help apply pressure and hold the packing in place.

Direct pressure: There are many dressings that are specifically made to work as a pressure dressing. The ideal scenario would be to employ one of these dressings, but a pile of napkins held firmly in place with pressure from your hand can be effective in stopping bleeding if no other resources are available.

Combination: In the most severe circumstances, a combination of the methods outlined above should be used. An example would be an amputation, where a tourniquet must be used but additional wound packing or pressure dressings will be effective in assisting with controlling the hemorrhage.

Common equipment items used to treat and control hemorrhage include:

Having a tourniquet in your IFAK could save your life.

Tourniquet: There are a variety of commercially produced tourniquets, including:

*Tourniquets of choice for the military.

Retention system: To retain the windlass after it has been tightened, there must be something to hold it. This can be as simple as a piece of rope or can be something like the plastic ring off of a Gatorade bottle. The key here is to remember that if the tourniquet is not kept tight, it is not effective.

Trauma dressing: Trauma dressings have evolved greatly over the last decade. Many of them consist of a gauze pad that is attached to an elastic wrap of some variety. Some of the more popular bandages include: 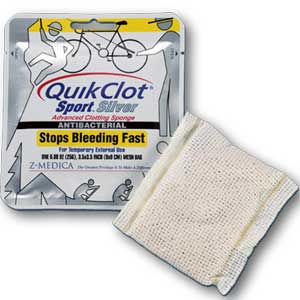 Hemostatic agents: These agents are typically the product of choice to place into wounds before they are packed to increase the chances of clotting and stopping major bleeding. The list includes gauze, sponges, pads and pouches.

*Products of choice for most law enforcement agencies and the military.

It is important to note that tourniquets are not currently viewed as a last resort piece of equipment. Current practices make use of a tourniquet a first step in the treatment of severe extremity hemorrhage. They are also very applicable in civilian medicine. The victims of recent mass shootings as well as the Boston bombing victims have had their lives saved by the quick application of a tourniquet.

Previous schools of thought determined that placement of a tourniquet would certainly lead to damage or death to the tissue in the area, but extensive research has shown that tourniquets can be in place up to eight hours in some circumstances without definitive damage occurring. Tactical Combat Casualty Care (TC3) guidelines that are used by the military, law enforcement and government agencies clearly state that if life-threatening bleeding is identified from an arm or leg, the immediate action to take is to place a tourniquet on the injured extremity to stop the bleeding.

At the end of the day, there is no replacement for definitive trauma care at a medical treatment facility. We do not have the luxury of always choosing where injuries occur, though, and oftentimes it is the hunting, skiing, hiking, camping and other accidents that happen in remote locations that can have the highest risk for loss of life. Having the knowledge and equipment necessary to stop the bleeding can save a life.

I guess when I said I liked the pictures you used, I hadn’t seen this one yet 😉 Besides the blood, the post and info was great!

Yes, the First aid images can get a little intense can’t they? Its like an early Halloween.