Has Electricity Zapped Our Self-Sufficiency? 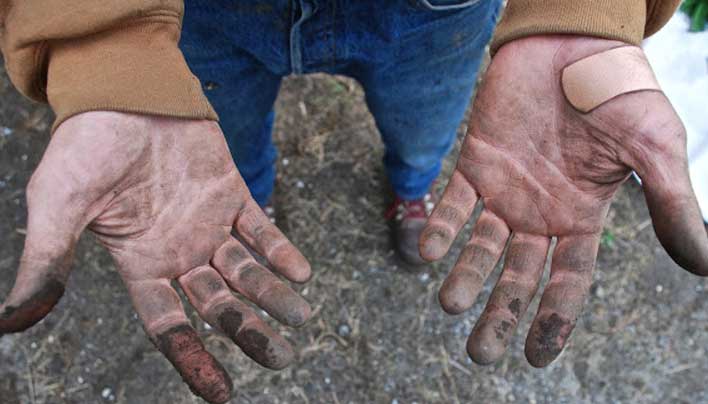 With so many folks preparing to survive economic depression as our parents and grandparents did in the 1930s, I wonder about our “progress” since that humble time.

Over the years, I’ve been privileged to meet many elderly country folks who said the Great Depression meant little to them. Perhaps it was because they were children at the time. But, perhaps their contentment during those hard times was because their families were self-sufficient. In the era before Welfare, their root cellars were full, water was free and neighbors traded with each other as a way of life.

Those old-timers also had no electric power in their homes in the 1930s and 40s. In fact, electric lines did not extend to many rural areas until the mid-1950s. As such, country folks did their chores by hand, grew and preserved their own food, and relied on horsepower and one another for jobs too big to tackle alone. Each possessed many skills. On any given day, a farmer could find himself as a carpenter, veterinarian, plumber, mason and mechanic – using mainly human-powered tools.

When electric lines, inexpensive fuel and motorized machinery reached everyone, those old treadle sewing machines, wringer washers, tin wash tubs, push mowers, kerosene lamps, pitcher pumps and all manner of hand tools and appliances were chucked in the dump. Horse-drawn farm equipment rusted away behind barns or, worse yet, was hauled to the front yard to be decorated for the holidays.

As family farms were consumed by industrial agriculture, Americans migrated by the millions to the suburbs to find city jobs. No longer living off the land, they mowed their 3 acres of grass on weekends and drove to the supermarket for corn dogs, corn chips and year-round watermelon.

Compared to many nations, we Americans are especially wasteful – turning up the heat in winter to take off our sweaters, and then setting the air-conditioner so low in summer we have to wear jackets in July. We had enjoyed decades of a seemingly unending supply of cheap fuel, plentiful food and clean water, and many of us simply never practiced conservation.

Reading a high school book from 1940, “The Earth and its People,” I formed a theory of where our complacency originated. The book details how it took millions of years for fuels (coal, oil, gas) to form below ground. The book mentions that once the fuel sources are gone, they are gone forever. That was it – one simple sentence about a limit to fossil fuels.

Without a pause, the textbook goes on to discuss all the wonderful conveniences and luxuries we have now (compared to “backward” countries) because of our “wealth of abundant fuels.” What teenager would choose to be backward when presented such an array of modern marvels?

Of two neighboring dairy farms in the 1960s, the family to the north of us had 9 kids; the other to the south had 14. My friend, Janet, was second youngest among her clan, behind five brothers and two sisters. I remember only once seeing Janet in new clothes – two cotton summer suits her sister made in high school sewing class. The chest freezer in Janet’s huge kitchen was as big as a ’69 Beetle Bug and packed to the top with bread, cheese and homegrown veggies.

To the south, Rosemary was the baby in her family of mostly girls. She never had a new dress or shoes. Our parents did not have air-conditioners, leaf blowers, clothes dryers or jet skis. Looking back, we did not consider ourselves poor. Money was sometimes scarce, but food was plentiful.

I especially loved having supper at Rosemary’s house in summer. After helping bring in the cows for milking, we’d devour plates of fresh-baked bread smothered in warm applesauce, pitchers of milk and plump strawberries. The kids scrunched together on long benches on both sides of a 10-foot table, but there was always room for another kid or two.

Our parents paid no heed to a food pyramid. We simply ate an abundance of whatever was in season. Many August meals were nothing more than corn on the cob as big as our forearms. Butter dripped from our elbows onto the table. We thought there was no better dinner anywhere.

As children, we headed to the woods with our Radio Flyer wagon in the fall to gather hickory nuts. In summer, my mother cooked raspberry jam in a kettle big enough to boil a hog. At other times, the same kettle held squirrel soup, dill pickles, stewed tomatoes.

Our main wintertime meat was raccoon. I couldn’t say so then, but admit now that I do not care to eat raccoon, no matter how it is cooked. But, because fat, furry Wisconsin coon hides brought $35-$40 each in the 1970s, we scoured the woods for them nightly. The greasy meat was merely a byproduct we did not waste.

Still, although many of us ate from the land and were taught not to waste, most of our tools and household items functioned on electricity and then-cheap fuel. Reversing that lifestyle will not be so easy. Our lives have been built around power and mobility. Who among us can sharpen (or even use) a crosscut saw, make lye soap (without store-bought ingredients), build a cistern or cut grain with a scythe? Only those who are 60+ seem to recognize what a well bucket is or have experience hand-pumping water.

While we are growing as much food here as possible in every season with our saved seeds, heating with wood we cut, and can get water without electricity, we still are on the grid – although working steadily at pulling the plug.

We have met others who invested tremendous energy (and much money) converting to wind or solar systems in an attempt to keep their same comfort level off grid – a feat rarely possible. Many, too, are building bio-fuel stills to keep their chainsaws, lawnmowers and roto-tillers going. While I admire their ingenuity, I believe we need to also teach our children not to rely on alternative energy and fuel, but to do things by hand. Long before the Industrial Revolution, societies flourished worldwide, built mainly with human muscle.

I appreciate the experience of living from the land as a youngster, which has proven useful as we relearn to live frugally and without power. I’m not cooking any coon, though, and have a long way to go before I can run a household as efficiently as Great-grandma did.

Thank you for this wise and heart warming article. I am 60+ and it sure seems lonely out here! With a herd of deer passing through eating my vegetable garden, I think I’ll pass on the raccoon, too. Will be passing your info on.

You are very welcome Barbara and thank you for stopping by and commenting! I would gladly pick Venison over coon myself also. We have deer in our back yard all of the time and that is why I had to fence my garden. Shame I couldn’t take care of that myself but laws you know… 🙂

While, I’m just a “youngster” I have the heart and passion of a country life from long ago. I live on my family’s century farm (1876), my parents and grand parents are gone now, but they have left behind not only written stories of life from years gone by, but also the tools all mentioned in this article, and I know how to use most all of them. I pity those who figuratively stop living when the power goes out. for me, I hardly even notice, as it’s only a temporary inconvenience. Thanks for the trip down memory lane. (the… Read more »

Thank you very much Paul. I agree with you that most people panic the minute they aren’t connected to their phones. I would have to take a breath myself if I am being honest, but I don’t know that I would miss it long and for all the wrong reasons.

Great article! I would like to add that using human power would go a long way to solving our country’s obesity problems.

Thank you very much MaddMac and you are very right. If everyone had to use hand tools for work every day we would have a lot less weight issues. More blister issues though.

I know exactly what you mean. One of the things I am planning on observing, with some delight I must say is electronics withdrawal. The symptoms won’t hurt anyone but I bet it will be fun to watch.

i don’t know about that!! it’s not all that great to think about loss of my laptop and internet ability!! if that happens i will go off the deep end!! LOL the phone? nah, they can have that back, i hate the phone!
the other thing i would miss would be my truck. i’m not that big of a fan on walking to far! nor of carrying everything while walking!!! LOL

excellent article. i’ll be 59 in little over a month, i can remember a lot of what you wrote of. even tho i don’t practice the skills of yesteryear i do know how. if shtf i wont much like going back to the old ways. well most of them but some i would welcome.

i do know how to survive without all the modern conveniences.

We need more people with your skills and experience Echo Moon!

no doubt it would be a struggle to go back to the old ways. and i would stumble and probably fry a few brain cells in the process of remembering everything. i have to admit that i would have to find someone to teach me how to hand milk. that’s one thing i’ve never personally done. watched a lot but never hands on.

Linda,
Imagine my surprise this morning as I sat on my deck and opened my most recent issue of Mother Earth News, only to see my name in print! My husband and two boys moved from a small Iowa town to Seymour Mo over the summer to begin living our dream of self sufficiency. So far we have 50 laying chickens and are looking forward to implementing off the grid living. I will look forward to your blogs, I know I will learn much from you!
Thanks!
Lynda Holliday

Well, imagine my surprise to find out Lynda Holliday is moving to my old neighborhood. Seymour is a small town. You’re going to have fun with that. Welcome to Missouri and thanks for your encouraging words. We are still learning, too. We can all learn from each other. By the way, you’re going to like this climate much more than Iowa. Today I planted some more lettuce and spinach. I couldn’t do that in Wisconsin in September. Stay in touch!