Food Storage: Knowing What You Have is More Important than Buying Something New 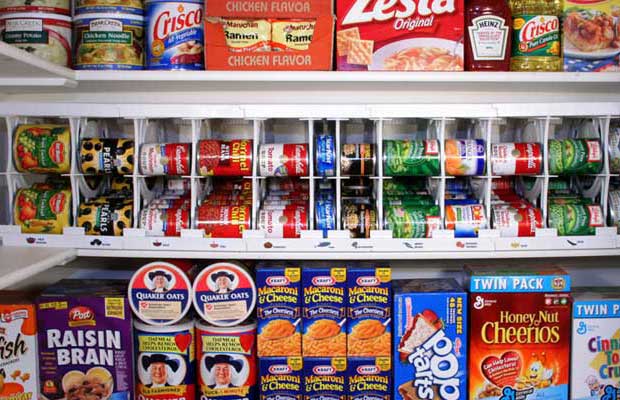 The other week I stopped and stared at my pantry. Looking in on all of the cans of food, bags of rice, beans and jugs of water gives me a sense of accomplishment and a certain satisfaction in all of our prepping efforts to date. For some reason I got it into my head to arrange things because the pantry had gotten a little disorganized over time. I started by pulling every item out of the pantry and staging them in the kitchen. There were bottles all over the place of dressing –  cans of beans and tomatoes took over the kitchen table and pasta galore spilled onto the kitchen counters.

The first sign of trouble was when I grabbed some condiments from the top shelf and noticed I had mayonnaise that was 2 years past its expiration. I started going further and this was the same case with pickles and some soups, even canned fruit. Now I was worried because it was obvious my brilliant solution to all of my family’s food problems had failed miserably. The next order of business was to grab one of my kids and have them check every label on every product. This scored me a lot of points I have to say…

Next I went back into the pantry to grab some of the larger items. We have large 50 pound bags of rice that I got from Costco for a ridiculously cheap price. I grabbed one of the bags off the top shelf to lift it up and noticed the bottom was a funny color. Actually, it looked like mold and the bag was stiff. When I pulled it down I discovered that yes, the bag was moldy. Someone, maybe I placed a one gallon jug of water on the top shelf and at some point it had leaked. The jug of water was empty and 50 pounds of rice was ruined. I don’t know how this happened, but it was a little depressing.

The first step is to admit you have a problem

Here I was, mid-way through a Saturday afternoon, my house was in chaos due to all of my food storage being distributed around the rooms and I was finding more and more food that was out of date or inedible in some fashion. Initially I was ticked off that I had let this happen. I started thinking about what all could have gone wrong with food and how foolish I would have felt if we had some crisis and I went to grab the food that was supposed to feed my family and it was all rotten. Visions of my family staring at me with angry expressions on their sunken faces started to appear. Not good.

So after I had all of the food out and verified what was really expired I realized that it wasn’t too bad. It was a good idea to do this though because I wouldn’t have found that rice probably until it was too late. What really stunk is that my super awesome system for rotating groceries was not working and again, that was my fault for assuming this was being used.

Why weren’t we rotating our food the right way? Well, it comes down to a few main reasons. The first reason is that our pantry shelves didn’t really have any rhyme or reason to how food was stored. We have a decent amount of pantry space but cans of beans were mixed in with cans of fruit and for some reason we had jars and jars of jelly that nobody was eating. When groceries got put away, there was no predetermined place or order for them to go in so they went where ever was easiest. This usually meant they all got loaded onto and taken off of one shelf. Another aspect of this is that we weren’t using the time tested FIFO system (First In First Out) so food wasn’t getting rotated like it should. Fortunately for us, this didn’t get too far out of control, but we did have to throw away some jars of food.

There were two other contributing factors to our food use and one was the way my wife shopped. She is excellent at clipping coupons and always has her coupon book out when she goes shopping. The problem was that she would buy whatever she had coupons for and didn’t take into account whether or not we needed it. For example, we had a ton of jelly like I said because they were buy one get one free so she stocked up. All of that jelly kept sitting in the pantry and items we do use, but didn’t get the same coupon attention were lacking.

Also, we eat most of our meals from fresh ingredients and my wife cooks from scratch a lot. This in combination with my daughter’s gluten intolerance caused the biggest stockpile of food we had (pasta and canned tomato sauces) to be virtually ignored for many months. What used to be a staple was forgotten and was at risk for going bad.

Starting at the beginning

Now that I had all of my food out of the pantry, I was able to sort it into groups. This is just as fun as it sounds. I put the food back into the pantry in a specific order. The item order itself doesn’t matter so much as the fact it is in order. I started clockwise in our pantry and put canned meat, then beans, soups, fruit, coffee, tomatoes, sauces, mixes and then baking items like flour, sugar and other sundries. Pasta went into the kitchen and placed in one spot and the hard to reach containers of condiments were placed back down on eye level so they could be used. Freeze dried food went in storage containers under the bed. Water was stored on the floor to prevent anything bad from happening to the rice again. I know that I would have been fine if I just stored all of the rice in 5 gallon buckets, but I haven’t gotten around to that yet and we do eat off of our rice weekly.

So I had the semblance of a system now and I started filling it in with the cans according to expiration date. The cans that were the closest to expiration went at the front of one row and it wrapped around to two or three rows if needed. The newest cans were on the left and the oldest were on the right. I didn’t throw everything out that had expired because I know you can go past the dates on most things. I wasn’t going to give Mayo a chance though… Now not only do we have a simple way of pulling the oldest food item, but we can easily place new cans in a spot that will ensure rotation.

When we go grocery shopping now, my wife can easily see what we have left and fill that up. We are also trying to cook more according to what we have and purchase what we ate, as opposed to what we want, to eat to keep the pantry stocked.

This exercise taught me a few other lessons that weekend; actually it was a weird weekend because I spent both days doing similar things. It was almost like I was a nesting bird and it was a weird compulsion that came over me. I don’t normally spend my weekends reorganizing anything but it was good that I did. This also manifested itself into a good ammo inventory but I’ll write about that on another day. Now we have a better system for storing and rotating food and a different strategy for filling our pantry. That type of understanding is extremely beneficial and ensures that you aren’t just buying a ton of supplies and shoving them in a dark corner. You instead are building a stocked larder that will be ready for you when you need it.

Where did you get the organizer for your canned goods seen in the picture? Looks like a great way to organize and maximize utilization of space.

This picture is just a stock photo, but the can organizers are just like these on Amazon http://www.amazon.com/FIFO-Tracker-Storage-Organizer-Dispenser/dp/B001JYJ3FO I also found cheaper cardboard organizers on this site http://www.canorganizer.com/ that I keep meaning to purchase and try out. I think if you take care of them they might be a more cost effective option.

Great article. It’s a good idea for people to check their preps on a regular basis to make sure they don’t have situations like you had with the rice. That situation made me think of a point some may not realize about water storage, so I thought I’d throw it out there. Never store water, especially in plastic bottles/containers, directly on concrete, such as a garage or basement floor. Even if the bottles are in the cardboard carton and wrapped in plastic. Chemicals in the concrete, or at least their “flavor”, will leach through the plastic and give the water… Read more »

Thank you very much for the comments and compliments Rob! That reminds me now that you mentioned it that the water smelled pretty rank so we emptied and refilled them all. I had forgotten that about the concrete leaching chemicals.

Just an FYI. The dates you see on can foods are not expiration dates. In fact if the food was canned properly it will be good indefinably. The flavor, texture and nutrition may change. That is why it is often labled “Best By”. The USDA has a big write up on this.