Prepared? Could your family have survived the Colorado floods? 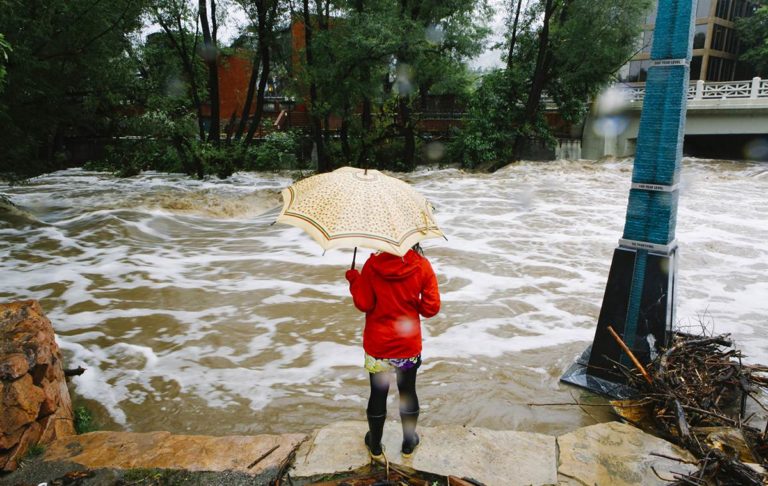 As preppers or people who are trying to be more prepared for events in life I imagine that everyone has some of the same thoughts that go through my head whenever I see events like the Colorado floods in the news. I usually go through several emotions based upon whether my family or people I know would be affected, and then I am relieved if we aren’t. Lastly, as the reports of damage and recovery occupy most of the news I begin to wonder if our family could have survived the way millions were forced to do in the Colorado floods.

The ultimate test of all of your preparations is some type of disaster or crisis like this isn’t it? This is the type of thing most of us are preparing for on the surface regardless of other motivations we have. Even if you live far away from any water whatsoever on top of a mountain, natural disasters have a way of impacting people each year. If it isn’t floods, it’s the wildfires recently. If not fire or water, its hurricanes. There are ways Mother Nature has of messing up our lives and you don’t need a grand conspiracy to motivate you to prepare. Just watch the news and you won’t go too long without some scene of horror that causes me at least to think how would I make it through that?

The victims of the Colorado floods are finally starting the long journey toward rebuilding even as storms threaten again. For those who were in the path of this destruction as well as those who might have been safe from the rising waters, this disaster presented two main options we frequently talk about here on the Prepper Journal. How would your preps have stacked up?

Bug Out or Shelter in place?

When the news started talking about the floods many people had the same short window of opportunity that so many other have of getting out of the direct path of destruction. This is when they had to make a decision to Bug Out or to Hunker Down and ride out the rain and water. For those people in lower areas or who were closer to rivers and creeks that had already started to rise, they had to make the decision to leave. Those who didn’t or could not became some of the victims.

I heard a report that Coloradans in that area are prepared for snow and cold, not flooding and I wonder how many may have ignored the signs telling them to evacuate. Being able to physically walk out the door is that first hurdle that you would need to conquer. That entails having a plan and supplies ready to go. The second part would be pulling the trigger on that actual decision and moving before it’s too late. Is this something you have considered if you were in the same situation?

What about the people who didn’t have to evacuate?

For all of the people who were in the path of the water, there were even more who weren’t directly impacted by the flooding but they were impacted by the destruction. Some people were told that even though their homes weren’t flooded, that they needed to evacuate or risk being trapped because the rescue teams wouldn’t come back. The authorities were saying leave now, or you are on your own. Personally I like that option and would take it myself all things being equal. I don’t want to be forced from my home by authorities who say they know better than me. I will take my life and the responsibility for my welfare in my own hands.

Now of course the flip-side of this is if something does happen –  I can’t cry and say I was neglected, but a lot of Coloradans are just like me. They insisted they were perfectly capable of taking care of themselves and stayed put. If this is what you might have done, would you be able to shelter in place with possibly no way of leaving for a week? Assuming that the roads were out, power was knocked out and there wouldn’t be any stores open, could you survive?

Would you have enough water? – It’s been said hundreds of times on this site alone, but the average person needs a gallon of water per day for hydration and hygiene. In a clean-up situation or if the temperatures are warmer, this amount could be double based upon how much you are sweating or working. Do you have enough water for your family for a month if needed? Do you have a way to resupply that water, maybe with rain barrels or a creek? Do you have water filtration methods available to you? This box would need to be checked off before you said yes to staying put. Water is one of the most available things you would need to survive.

Would you have back up power? – Living through any natural disaster like this involves some loss of power. Inevitably, power lines will be down or will be shut off for safety. If power is on, there is no guarantee it will stay on as crews might need to take sections off line to work on areas that can be miles away from you. Having a source of backup power is going to mean the difference between living comfortably or living miserably. A backup generator is usually the preferred method of powering some devices like refrigerators, cell phone chargers, laptops and lights. It isn’t the only option though. A decent sized power inverter you can buy at Wal-Mart and a few containers of properly stored fuel will meet a lot of the same power needs. It will most likely be much quieter and it will absolutely be easier on your back also.

Would you have enough food? – Everybody needs to eat and that is usually the first thing we run to the store for when there is any threat of weather or loss of services. Even if you have a pantry full of food, do you have the means to cook this food if you have no power? Do you have plenty of food that doesn’t require any cooking at all? Do you have food that you and your family will eat? Having hundreds of pounds worth of beans is great but if nobody likes chili for every meal, do you have a plan?

Like I said at the front of this article, this just got me thinking and I believe that’s a good thing. I don’t want to become complacent and hope that if I am faced with a situation like this I will have everything we need and be secure in our preps that we have made. I do wish the people of Colorado all of the best. Our thoughts and prayers are with them.