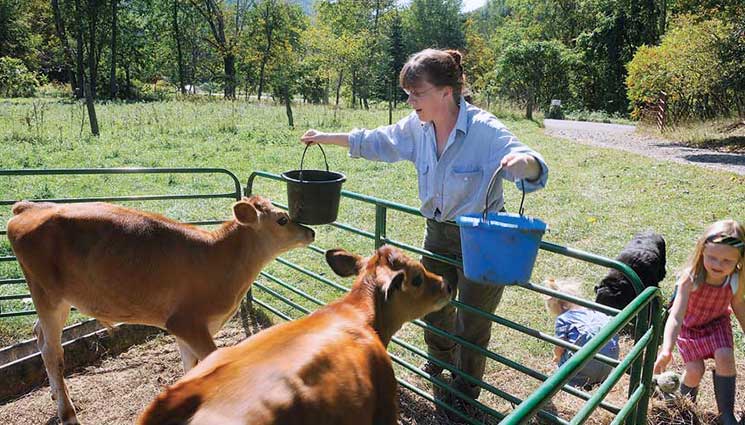 We are now three to five generations removed from the rural backbone that strengthened America.  The world at large has undergone a similar transformation as the promise of easier work has created a migration to big cities.  These mega-cities could be seen as an experiment gone awry, as general well-being has declined, with suicide rates increasing across the world.  Crowded conditions and economic strife have led to rampant crime, pollution, corporate malfeasance, and a dog-eat-dog type of competition that can be described as a temporary insanity.

The economic crisis we are living through has been the final straw for many people, as promises of a better, easier, and more creative life seem to have been sold to us by carnival-style tricksters who are laughing all the way to (their) bank.

Here are the top reasons for becoming self-sufficient; these are based on fundamental, systemic concerns for why undertaking this life change will not be a fly-by-night fad, but rather a long-lasting means for personal independence.

As the cliche goes: Freedom is never free.  But it sure beats the alternative.

10 Ways to Get to Self-Sufficiency

The global economic collapse has become an eye-opening experience for many people. The ongoing crisis continues to create more joblessness at a time when the cost of essential items like food and energy continue to rise.

Inflation is only expected to continue due to excessive printing of money to compensate for the bursting economic bubbles, which were arguably created by printing too much money with artificially low interest rates in the first place.

The 2008 price shocks in oil followed by the financial collapse have led many people to begin taking measures to become more self-sufficient.  And recently the ominous signs of food shortages, the weakening dollar, and the rising price of oil all point to a similar atmosphere as 2008.  Some have taken steps to conserve electricity, reduce spending and consumption, while others are planting kitchen gardens and installing solar panels on their homes.  Even living off the grid is becoming a mainstream concept for those seeking independence.

Indeed,  becoming more self-sufficient is proving to make common sense whether one anticipates more hardship to come or not. Sure, many of us would love to live completely off the grid without giving up everyday comforts, but this is not practical for most of us.  However, there are many steps that can be taken to move towards self-sufficiency which can be relatively painless and quite rewarding.

The following are 10 suggestions that can lead to independent living:

These steps will save money as we move closer to the ultimate prize of independence.  Each action we take to live more simply frees us from the control systems put in place to make our lives more complicated, more toxic, and less independent.

I agree with many of your ideas. However, if your suggesting that we not invest in the stock market then I totally disagree. The stock market is one of the best ways to get ahead. All your other ideas, except reducing debt are penitence compared to investing.

Thanks for your comments Sharon. Every investment opportunity comes with risk and if you are comfortable with the risks then I say have at it. For me personally, the market and our economy at large is too risky. It has be proven to be susceptible to wild fluctuations, investments can be taken (MF Global) and not returned and even banks (Cyprus) can take your investments for no other reason than they need the money. What is safer? I don’t know but I am laying odds that having money tied up somewhere you cant touch it, that can be instantly worthless… Read more »

In actuality you might as well go to Vegas and put your money on black- or red, whichever you desire. The absolute best investment you can make is cash value (sometimes called asset class) life insurance. That’ll make Dave Ramsey disciples have seizures but it’s actually true- and also how many families (think Kennedy, Rockefeller, etc) have established legacy wealth- along with large banks and institutions. That’s where “they” have their money- but tell you to do something entirely different. Oh and I’d say 99% of ‘insurance’ agents have no clue how whole life insurance really works- they just want… Read more »

I am not an economist…. so take this for what its worth. I believe the author is saying we have an imbalance in producers versus the purchasers. An economy includes both the people buying and the people selling.

Ah. If that is what was meant, I can understand the point.

As much as I applaud small farms and urban homesteading, unless the woman in the picture managed to produce a plastic bucket, a metal bucket, corral rails, jeans, a work shirt, and the clothes that her kids are wearing, she is not “self-sufficient.” I also ask where she got her livestock and the feed. Where do they get their water? How do they assure that it is not polluted? I mention this because human beings have always been and always will be interdependent. Cooperation, not competition, should be our method, and the common good should our goal. You even note… Read more »

Thank you for your comments SMStauffer. I do agree with you that humans need other human beings, but that isn’t the point. I think that you may have a different idea of the concept of self-sufficiency. In my mind, it isn’t someone who wears and can make a grass skirt. It isn’t limited only to people whose house was built with mud bricks they formed themselves. Self-sufficiency is more about what you need to live. A self-sufficient person in my opinion might not need a job for money, or a grocery store for food or the power company for energy.… Read more »