As preppers we can easily see the value of stocking up on extra food, water and medicines. Having a backup power source like a small solar array or a generator with a supply of treated gasoline is a no brainer, but there is a world of prepping supplies the average prepper either doesn’t consider or else these fall to the bottom of the list.

I am talking about higher-end items including but not limited to Night Vision Goggles, Long Range Sniper Rifles, Expensive Rifle scopes, Gas Masks, NBC protection, and Ballistic protection in the form of bulletproof vests. There aren’t any of these items that I would say you don’t need if money is no object. Of course I know that anyone reading this blog has other bills to pay and other responsibilities to think of. We don’t cater to the wine and cheese club I don’t believe so costs and the likelihood of needing some of this gear has to be weighed in all of your own (mine included) preps.

One of the items in the above list that I would purchase first would have to be body armor. Why? Well, because if someone is shooting at you, these can save your life. It’s as simple as that. Our military and police all wear body armor for just this same reason. But who would ever shoot at me you ask? I don’t know, but I would rather not have that to worry about. I know this is a large expense but if you think the fat lady is warming up like I do, it may be something you will wish you had. 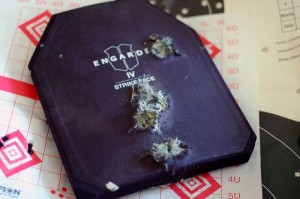 Front view of the plate after I shot 4 rounds of different calibers into it.

Now, I am not trying to say that having a vest makes you bulletproof. On the contrary, you can be shot just like anyone else, so traipsing down the street like you are Billy Bob bad ass in a bulletproof vest is a dumb idea. If you find yourself needing to wear this level of protection you should be just as careful as you would normally be. This is not something that makes you invincible but it does give you a huge level of protection that could save your life.

Bulletproof vests are really only designed to stop massive damage to your vital organs but it does leave everything else exposed. It is just another force multiplier you can use to protect yourself but don’t have any illusions that you will survive anything just because you have a vest.

I was given the opportunity to test out a level IV hard armor plate from Engarde Body Armor. Body armor comes in various flavors. Each level is certified by the National Institute of Justice to provide different ballistic resistance. To give you an idea of the protection levels in the vests, I have outlined them below. 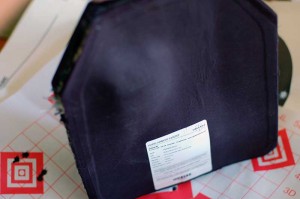 View from the rear. Zero penetration.

The plate by itself is 10″ x 12″ and weighs 7 pounds. Its thickness is just a hair over ¾ of an inch thick. For complete protection you would have a plate carrier with two Level IIA soft panels and two Level IV plates. This isn’t going to be light and comfortable, but a .30 caliber round slamming into your chest isn’t going to be comfy either. The coverage is probably smaller than you would expect at 10″ wide so this will seem to leave a lot of exposed area unprotected. You do have to factor in gear straps and the placement of the rifle but in here also.

We took a plate to the range and decided to fire some rounds into their level IV bullet proof plates. This was not a scientific test because it wasn’t on a body obviously and wasn’t matched to the soft armor panels for complete protection You can see the results of the test in the video below. I conducted this test at 50 Yards and shot the vest 4 times. The first time was with a .30-.06 round and then three .223 rounds. I still have a long way to go on the video quality and if I find myself conducting more reviews I suppose I will need a better camera and tripod set up.

All in all, the bullet proof plates stopped 4 direct hits at 50 yards and I would trust them to stop a bullet for me. You can learn more about EnGarde Body Armor and their panels at their website.

One of the key tests and from the looks of that picture where it fails and if it fails that then its a no go is does the impact of the on the other side protrude against the plate wearer. One of the key tests that the DoD/Federal Law Enforcement do is exactly that test. If it fails in any way with there test round sizes then its not considered. This was the major reason why Dragonskin Body Armor was rejected…it repeatedly failed that test. When you have a protrusion the full kinetic energy that remains from the round is… Read more »

The back side had swollen out by the impact, but there was no penetration of the round. Wouldn’t you feel the impact regardless? If you are wearing plate armor, you are still going to feel the energy absorbed by the round hitting the plate.