WROL – Protecting Your Family When the Bad Guys Come Down Your Street – pt. 2 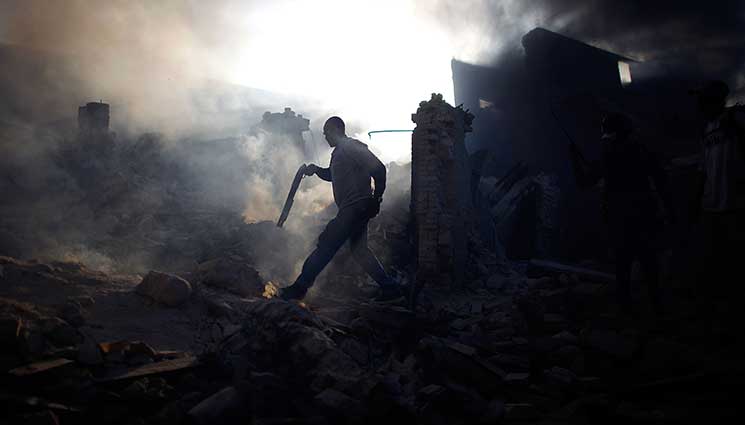 Yesterday I started with an overview of some security questions I had about our own house from the perspective of a total breakdown (Without Rule Of Law) societal event. In that post we discussed the importance of gathering intelligence, of actually knowing what is going on around you. Now that we know what type of scenario we may have to defend our homes and families from and have a general understanding of knowledge that can help us, I want to talk about some options. Again, just to be clear that anything we plan for can be undone by a wide variety of factors. The suggestions aren’t meant to imply that you will have an impenetrable fortress, but it may buy you some time and will offer more protection than just closing the curtains.

Knowing when someone is approaching is only half of the problem. The real challenge is to keep them away as far as possible. If you have a group of people, this may mean meeting whoever is approaching far away from your property and dealing with any threats there as opposed to your front door. If this isn’t possible and you are forced to retreat, then your next best bet would be to not let them have an easy way into your house.

Starting with the driveway and your yard, if you can, move your car further away from the house to block access. Provided the bad guys don’t drive through your yard, this would prevent them from rolling up close to your house very quickly. Every yard is different of course, but these are just ideas. In a true collapse scenario it may be necessary to block the road entirely. Of course, this only matters if cars are still functioning, but let’s assume they are. This is something you would want to discuss with your neighbors naturally, but could be an effective way of blocking or slowing vehicle traffic. Blocking access to your neighborhood can be done a lot of ways and could provide a first line of defense against anyone who isn’t supposed to be there gaining access easily.

No matter what the roadblock is, unless you have a high wall guarded by a moat with crocodiles, even if they have to walk a little, they will eventually make it to your home. I started thinking about the preparations that homeowners make before a hurricane and this seems perfectly logical to apply to this situation. During a hurricane, windows and doors are boarded up to protect your home from a vicious assault by Mother Nature. The same could be done with your home to great effect. There was actually even an episode of Doomsday Preppers where one of the featured preppers, Jay Blevins already had this idea.

With some planning now while everything is relatively normal, you could acquire sheets of plywood and have them cut to fit over your window openings. This of course could be done later I guess, but it would be quicker to have them pre-cut and numbered for easy installation. Jay’s plan was to cover all of the ground floor windows and doors to prevent people from entering while leaving the second story windows open. This seems like a great idea too because he could coordinate fire on the people below if they really started trying to get in with axes or chain saws. The plywood boards themselves are attached via long bolts to a horizontal board going over the window opening inside so there are no nails or screws that can be pried out. That is pretty smart.

The weather is a consideration too because if it is hot outside you likely aren’t going to want to board up all of your windows and doors. Even drilling vent holes in the windows won’t help much and could weaken the strength of the board.

Even if you have everything boarded up, you will likely still need to get into and out of your home unless your supplies of food and sanitation can keep you comfortably confined for a while. An exterior door with protected access would need to be your way out, but you could have this barricaded with items that can be moved later.

Maybe you don’t have the time or money to have every window and door around your house fitted with heavy-duty plywood. You can still board up windows and doors. This is another reason to keep scrap wood and lumber around because if you can’t keep someone out permanently, at least you should be able to slow them down. Couches and refrigerators in front of doors will slow people down. Implements like the Bar-Ricade bar or something like the Master Lock Door Security Bar will reinforce your entry doors and should slow an attacker down. The Armor Concepts door jamb hardware kit is simple to install and will reinforce your doors so they can’t be easily kicked open. Will they stop a big police style battering ram? I don’t know but they are better than nothing.

If you have some level of difficulty set up on your exterior entrance points, there will undoubtedly be noise associated with someone trying to get in. You may have a dog that is warning you also and I would say pound for pound they would make the best intrusion detection system unless your dog was like ours and got a little too sleepy after steak night. That’s my fault though.

You should prepare well in advance for situations where someone is trying to get into your house. Several methods can be deployed to try and fool you into thinking the attack is coming from one direction when actually it is coming from two or three. Once you have been alerted to someone trying to gain access, the key is to move quickly. Knowing ahead of time who is going to the front and who is going to the rear will give you two sets of eyes instead of one and hopefully you have some firearms for self defense so you will have two means of defending yourself and your home also. This may be easier said than done if the members of your party are wounded, sick or tired from guarding against assault all night. Depending on your defenses, the people attacking if they are smart will come at you from more than one location. This is so that if they can get you to focus on the front door while another one of them sneaks in the back they can attack you from two sides.

If the people attacking you are a small group they will likely try to distract you with noise or commotion in one area while they sneak in another. If possible have one person deal with the commotion in the front and position another in the back. This will give you the ability to at least deal with someone from either direction. If this isn’t possible you may have to fall back into a hallway or some other narrow spot so that you can concentrate fire if they do enter your house.

If you have a second floor, your fallback position might be the second floor. If this happens, and they have gotten into your house you have to block their access to you at all costs. Stairways can be deadly if you are the person at the top firing down on the intruders. Obstacles on the stairs can slow them down; even throwing items at them while they are trying to navigate the stairs can slow an advance. This might sound a little too much like Home Alone, but we aren’t all Navy Seals (even the bad guys) so fight with everything you have. It may be your bowling ball, but if you crush a skull of someone who was trying to kill you who is going to care that you saw it on a movie?

If you are forced to retreat into the second floor, having a way out may be your last hope. This could be a window ladder down to the first floor or attic access to a point that you could escape. If this is really your last stand barricade the doors again to give you more time to exit and run if possible. Our attic gives me access to a door over the garage and I can escape through there and out into the yard. If I had to I would punch a hole in the wall to gain access to the attic and then try to escape while the bad guys were trying to get into the room on the second floor. Whatever you do you have to try and fight to survive.

If you are forced to flee, you should have a rally point already defined to meet everyone at in times like this. Hopefully everyone makes it there and you could have supplies stashed in a hidden cache so that you aren’t completely out of options for continuing to survive.

Live to fight another day

Hopefully, if things have gotten so bad that you have to employ any of the suggestions above just to stay alive you were able to defend yourself before you had to run away from the house. However, it may not work that way. You may have to run away to live and I think running and living in some cases is better than standing and dying. Now, I wouldn’t say this if I didn’t have everyone in my group with me, but I think you get the point.

Hopefully that gave you some ideas. If you have any suggestions for everyone else, please let us know in the comments below.

More than likely my comment will apply more to part 1 of this series but could be adaptable here. It all depends on the size of your land and your neighborhood. What we have planned is to cut down trees to block vehicle access outside the neighborhood via roads and open areas. Where trees are not readily available then cars can be driven or pushed to accomplish this also. This will force intruders on foot for quite a distance and they are on unfamiliar territory when doing so. On our property we have on area with trees and Kudzu and… Read more »

If group size and equipment allow it someone on a nice .308 or .30-.06 can be on over-watch and provide additional long range support. As you say it really all comes down to what you have to work with.

Friends of mine changed the stairway to the second floor and installed a pull-up stairway. If need be they can crank it up and there is no other access. If people try to get on the roof and come in windows, they have installed heavy shutters with a drop down bar. By the time anyone would get in they would be easy targets. Now, if someone set fire to the house, not sure what they could do.

I like the pull up stairway idea. Reminds me of the tactical treehouse!

For security, I have a battery operated security bar that hooks to the doors and will sound if someone tries to break in. Also, small poster nails to put on front and back porch and around windows outside on the ground, except for emergency exit window for intruders to step on. Think they would avoid breaking in the house.

Great ideas! Thanks for commenting Termight… I like that name too 🙂