How to Save Money Every Time You Shoot 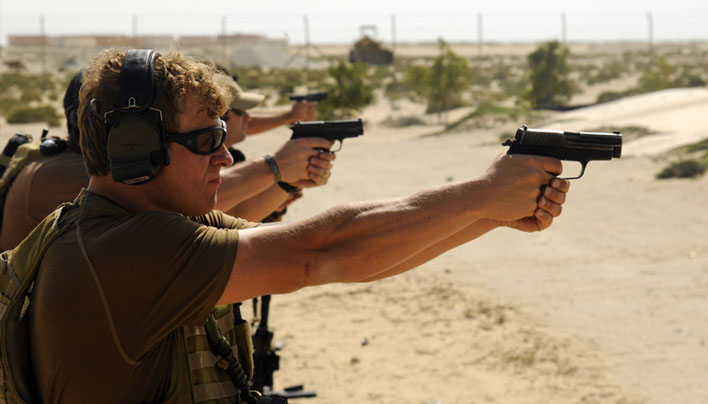 Going to the range and shooting does different things for different people.  A vast majority of the time (it should be always) we go to the range with the intention of keeping those perishable shooting skills frosty and at an increased level of readiness.  But there are those times where we just want to burn off some steam and destroy something without the threat of being arrested.  There’s nothing like making small explosions happen repeatedly, well unless you’re a SEAL or on an EOD team then you get to make ginormous explosions all the time and save the free world from terrorists and pirates.  For me shooting is simply Zen.  It sounds ridiculous to some people, but no matter what’s going on around me I’m in control of my physical movements and mental process as I manipulate that trigger to the rear and make my gun do what it was designed to do.  No matter if I’m shooting slow aimed fire or shooting controlled pairs, I’m calm.

Nevertheless we all shoot differently, move differently, and think differently.  But when we go to the range there is one thing that pretty much no one can avoid.  The cost of ammo!  Good God the only thing that rivals gas prices today is how the price of ammo has increased exponentially.  Unless you produce your own ammo, have a professional shooting contract, or you’re the CEO of Winchester, Federal, or Hornady ammunition companies, then ammo can put a fat dent in your wallet.  I know there are a lot of you out there who get the old “hairy eyeball” from the old lady when you come back from a few hours of shooting because they know you spent some cash.  For those women who get the hairy eyeball from your man….well all I have to say is why the hell wasn’t he shooting too and we know whose wearing the pants!  Just kidding…kind of.  Anyways don’t let the cost of ammo cut back on your training.  There is relief and that comes in the form of a .22LR pistol or rifle.  The .22 is the most popular and widely produced cartridge in the world and it’s the cheapest.  You can literally shoot all day for less than $10.  Most major ammunition websites sell .22LR in boxes of 500 rounds anywhere from $20 to $40.  It all depends on the grain that you shoot.  Plus buying a .22LR if you don’t already own one is an inexpensive venture as well.

The primary reason I decided to write this specific article was because I recently purchased a .22LR conversion kit for my Sig Sauer P229R-DAK (chambered in .40S&W).  The kit, made by Sig, comes with the entire pistol top end (barrel, slide, spring and spring guide) and one magazine all for around $300.  All you have to do is field strip your Sig and assemble the new top end and you’re shooting .22LR.  The coolest thing is that since you’re shooting with the same receiver the trigger operation and poundage required to manipulate the trigger is exactly the same as shooting .40.  The only difference is that it’s much quieter and the recoil is substantially less.  All the fundamentals of shooting are the same.  If you forgot what those fundamentals are and need a refresher, let me direct you to Chris’ articles on the “7 Habits of Highly Effective Shooters”.  He has also authored separate articles devoted to each of the seven habits.  I keep printed copies of these articles in my range bag so when people ask, “how do I shoot like that”, because my shot group is tighter at 25 yards than theirs at 5 yards, I give them some advice but give them the articles and just tell them to share them along the way.  But I love throwing that conversion kit on my Sig and blasting off .22 rounds.  Many major firearms manufacturers produce .22 conversion kits for the larger caliber weapons they produce.  The other day at the range I saw a guy shooting his Kimber 1911 (.45 ACP) for a few mags then he threw on Kimber’s .22LR conversion for it and started throwing .22LR downrange.

So if you don’t already have one get yourself a .22LR weapon and go to town.  They are so much fun to shoot and you just can’t beat the cost.  The seven fundamentals of shooting are exactly the same no matter what gun or what caliber you’re shooting.  I don’t care if you’re shooting a .22LR target pistol or a .50 DE pistol, it’s the same…..well okay one’s heavier than the other but you know what I mean.  Owning and shooting a .22LR will bring your shooting skill set to the next level and cost less than a lunch or that foofoo coffee drink you buy every morning.  I mean when’s the last time you spent more on gas to get to the range than on ammo?  Do your research on .22LRs just like you would with any other gun and buy the one you want and enjoy the shooting experience.  Plus when the Zombie Apocalypse goes down you’re likely to run across .22LR ammo more than any other and you can carry a ton of it!

This article appears courtesy of PJ at Center Mass Group

22lr is nice. I use a lot of it, however, lately I’ve been reloading a lot of 38 special mid range loads (4.8 gr TrailBoss + 158 gr Keith). They cost me just about the same as a 22lr since I mould the bullets myself. Its the way to go. After all, it may take several of those 22lr to put Zombie Sr. down and maybe even a couple for Zombie Jr. But, one of these 38s is about 400% of one of those 22lr. I realize that if you don’t have the equipment or the skill, its a higher… Read more »