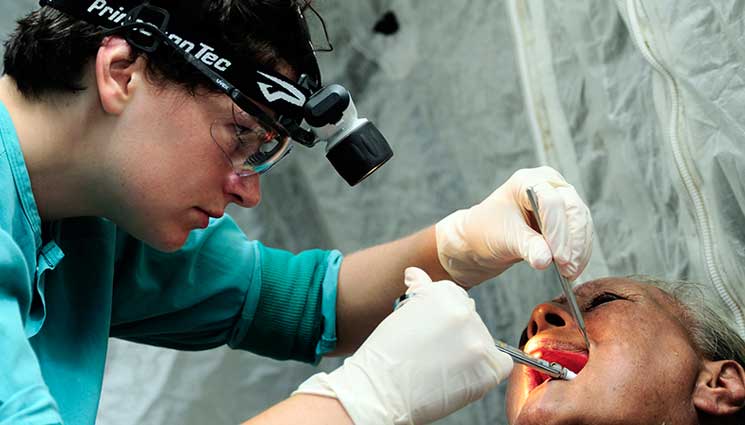 Editors Note: As Preppers we normally consider medical injuries in our plans. The “Band-Aid” piece of the whole puzzle is a little easier to follow than other subjects because we have more experience with treating wounds like this. If you have a cut, you know you have to stop the bleeding and keep the wound clean so it can heal. In some cases, stitches or a tourniquet or a sling may be required but a lot of us have played doctor before and these concepts aren’t so foreign.

Dental emergencies, on the other hand, require very specialized treatment in a lot of cases and it seems that Dental Emergencies like to pop up at the most inopportune times. The article below has a lot of good information on both minor and major injuries, some tips for treatment, and considerations for if the SHTF. Warning, some of the images are a little intense so if you get squeamish… Don’t say I didn’t warn you.

TOM and Sylvia Moore and their two boys, Tom Jr., age twelve and Jed, age ten, hiked all day and near dusk made camp on a lovely grassy knoll overlooking a high mountain stream loaded with trout, apparently begging to be tossed in their frying pan.

At daybreak, Tom and Sylvia were awakened by Tom Jr. and Jed jumping up and down outside their tent yelling for them to get up and take them down to the stream. The boys had their four rods rigged by the time their parents had dressed. Tom understood their excitement knowing how much the whole family had been looking forward to this vacation.

As they started out, the two grownups found the kids’ feelings contagious. Halfway down the trail, Jed, who had been running ahead, suddenly let out a cry of pain. When the family rushed up, they found the boy lying on the ground holding his jaw. Tom picked him up and sat him on a flat rock. Blood gushed out of his mouth. Pulling the boy’s hand away, Tom saw a gaping hole where Jed’s front tooth should have been. The boy held up a bloody tooth. Tom saw where the boy fell and the bloody rock where he must have hit his jaw and realized he had knocked the front tooth cleanly out of its socket.

Luckily Sylvia had once worked in a dental office. She gently took the tooth from the boy being careful to hold it by the crown. Leading the boy back to camp, she sat him in a camp chair while she got out her emergency first aid kit. Laying the tooth on a clean piece of gauze, she washed the blood from the boy’s mouth and inspected the tooth’s socket. A small amount of blood was still oozing out. She had the boy rinse with plain water cautioning him not to suck or use any force. She then rinsed what dirt she could from the surface of the root, being careful not to touch the root with her fingers. Still holding the tooth by the crown, she tenderly inserted it in the tooth socket, holding it firmly in place while her husband, using a piece of heavy mono-filament fishing line splinted the tooth to the two adjoining teeth. She made a cold pack with water from the icy stream which she had the boy hold against his face next to the injured area to minimize swelling.

Leaving Tom Jr. and Sylvia at camp, Tom took the boy down the mountain to a hospital emergency room where they got in touch with a dentist who gave the boy more permanent treatment. He told Tom due to their quick action in replacing the tooth and bringing him in for professional help, they had an excellent chance the tooth would be permanently attached though he would have to check the tooth’s pulp from time to time to make sure it was alive. If it died, he would fill the canal and the boy could still retain his tooth for many years.

Often when taking a vacation away from home, we are prepared for general health problems but do not know what to do when faced with a dental emergency. Whether the trouble faced is a simple toothache, pain from tooth eruption or something more serious like a broken jaw or an abscessed tooth, it may threaten to spoil a vacation.

Before leaving on a trip, it is good insurance to see a dentist in order to make sure there will be no dental problems which may give trouble in the near term. It is smart to add a dental first aid emergency kit to your luggage.

What should you have for dental emergencies?

The most common dental emergency. This generally means a badly decayed tooth. As the pain affects the tooth’s nerve, treatment involves gently removing any debris lodged in the cavity being careful not to poke deep as this will cause severe pain if the nerve is touched. Next rinse vigorously with warm water. Then soak a small piece of cotton in oil of cloves and insert it in the cavity. This will give temporary relief until a dentist can be reached.

At times the pain may have a more obscure location such as decay under an old filling. As this can be only corrected by a dentist there are two things you can do to help the pain. Administer a pain pill (aspirin or some other analgesic) internally or dissolve a tablet in a half glass (4 oz) of warm water holding it in the mouth for several minutes before spitting it out.

DO NOT PLACE A WHOLE TABLET OR ANY PART OF IT IN THE TOOTH OR AGAINST THE SOFT GUM TISSUE AS IT WILL RESULT IN A NASTY BURN.

This may be caused by several conditions the most probable being an abscessed tooth. In any case the treatment should be to reduce pain and swelling. An ice pack held on the outside of the jaw, (ten minutes on and ten minutes off) will take care of both. If this does not control the pain, an analgesic tablet can be given every four hours.

Broken teeth, cut lips, bitten tongue or lips if severe means a trip to a dentist as soon as possible. In the mean time rinse the mouth with warm water and place cold compresses on the face opposite the injury. If there is a lot of bleeding, apply direct pressure to the bleeding area. If bleeding does not stop get patient to the emergency room of a hospital as stitches may be necessary.

Place a gauze pad or better still a moistened tea bag over the socket and have the patient bite down gently on it for 30 to 45 minutes. The tannic acid in the tea seeps into the tissues and often helps stop the bleeding. If bleeding continues after two hours, call the dentist or take patient to the emergency room of the nearest hospital.

If you suspect the patient’s jaw is broken, bring the upper and lower teeth together. Put a necktie, handkerchief or towel under the chin, tying it over the head to immobilize the jaw until you can get the patient to a dentist or the emergency room of a hospital.

In young children teething pain can come from a loose baby tooth or from an erupting permanent tooth. Some relief can be given by crushing a little ice and wrapping it in gauze or a clean piece of cloth and putting it directly on the tooth or gum tissue where it hurts. The numbing effect of the cold,along with an appropriate dose of aspirin, usually provides temporary relief.

In young adults, an erupting 3rd molar (Wisdom tooth), especially if it is impacted, can cause the jaw to swell and be quite painful. Often the gum around the tooth will show signs of infection. Temporary relief can be had by giving aspirin or some other painkiller and by dissolving an aspirin in half a glass of warm water and holding this solution in the mouth over the sore gum. AGAIN DO NOT PLACE A TABLET DIRECTLY OVER THE GUM OR CHEEK OR — USE THE ASPIRIN SOLUTION ANY STRONGER THAN RECOMMENDED TO PREVENT BURNING THE TISSUE. The swelling of the jaw can be reduced by using an ice pack on the outside of the face (At intervals of ten minutes on and ten minutes off.

Sores in the mouth, lips or tongue can be caused by many reasons, irritation, injuries which bruise or cut the lip or just a run-down condition. The germs which cause most of these sores are always laying just below the surface waiting for a chance to flare up. Usually these lesions last five days no matter what you put on them. Such preparations as Blistex, Carmex, Butyn Dental Ointment or Spirits of Camphor will relieve pain but it is doubtful whether they cause them to heal any sooner. New studies suggest that high levels of another amino acid, arginine can give the body increased resistance to these painful mouth and lip sores.

Generally, when confronted by a dental emergency, you can only relieve the pain and give temporary treatment until the patient can see their dentist. Sometimes, as was the case in Tom and Sylvia’s family, fast prompt emergency treatment can spell the difference between permanently losing a tooth and saving it.

a drop or two of clove oil mixed into zinc oxide powder will make a great temp. filling.