What If You Find Out the Zombie Stories Were Real? 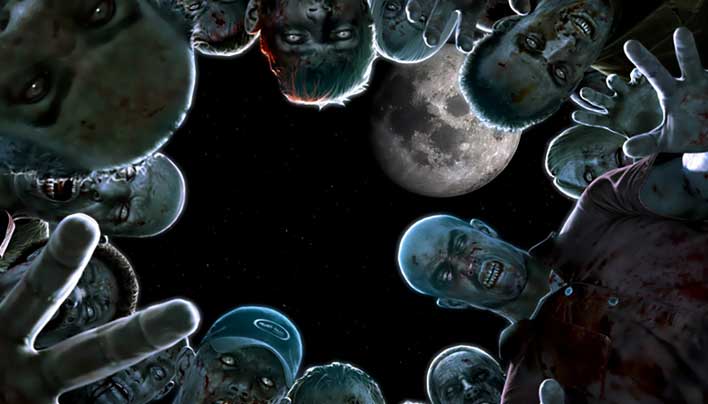 OK, I will admit right now that I like good zombie stories when done well in a movie. Call me what you will, but for escapism fun, not much tops a mindless horde of undead walking up on the unsuspecting good guy.

As they shuffle slowly, arms outstretched, your body tenses as they get closer to him nearly reaching his back with dirty long fingernails. Naturally, our good guy realizes that a bunch of stinky, usually moaning, rotting corpses, with tattered clothes, are behind him just in time to whirl around with some form of a blunt weapon, nicely smashing a skull or 5 before riding off in either an abandoned Hummer or astride a horse.

This is the type of movie scenario that just about anyone can see themselves in because you don’t have to have superpowers or physical strength. You simply have to avoid being snuck up on. Oh, and having an ax helps.

There are literally thousands of zombie stories in movies, games, TV shows, and assorted marketing paraphernalia out there and it seems that daily we have yet another zombie product or treatment. Why have zombies become so popular lately and why do Preppers almost universally latch on to this as something to prepare for?

People seem to have polar associations with the term “zombie horde”. I have seen some blogs out there devoted entirely to the coming zombie apocalypse. Others, like me, mention this in articles and it almost never fails to draw some comment to the effect of “You don’t really believe in zombies now, do you?”

Why it’s fun to use Zombie Stories to motivate

Let’s take the Hollywood make-believe theater out of the equation for a while and examine how zombies are used in the prepper community. I think there are two main schools of thought.

The “Believers” – I think there are some people out there that genuinely believe that a zombie future is in store for us and they are planning for that. These people have elaborate systems designed to protect themselves from zombies and play out scenarios for how to evacuate the city should their position be overrun. They have purchased a higher than usual selection of bladed weapons as this seems to be the most efficient way of dispatching the undead.

The “I’ll believe it when I see it” crowd – I think an even greater number of us out there use Zombies as a metaphor for potential states (more on this later) and have fun with the visual. In my articles, I do sometimes use the visual of zombie hordes, or mutant zombie bikers from mars as an illustration to a point I am trying to make. This visual is for some people easier to see/imagine than a lot of real-world scenarios. Additionally, from a macabre standpoint, planning for zombies is more fun for me than planning for real life. I will lump myself in with this group.

When you hear the word zombie, most people form that image I mentioned above almost instinctively. The zombie is usually walking with a limp (why is that), their clothes are tattered and frayed and soaked in the blood of their last victim.

Zombies almost immediately have bad teeth and horrible fingernails and walk slowly toward you. For the person who has a little confidence and their wits about them, these creatures don’t seem too hard to beat with all they have going against them.

The thing that I never understood was how they could live forever. I mean, undead doesn’t make sense to me. If you are a machine you need fuel. A body requires something for energy and zombies don’t have to have anything, even organs it appears, to live. They eat their victims you say? Well, that works for some zombies, but if our current zombie movie fetish is to be believed, they can’t drown, you can’t hang or burn them, they could be buried up to their necks for years and not die. How could that even be possible? I guess this is where I have to willingly suspend disbelief and I do, because I want to be entertained.

Now, how could the zombies come true if I believe as I said above that it really is impossible given what we know about the human body? How could some genetic mutation or global pandemic really create a nation of zombies? Why are so many preppers talking about zombies and why are serious, rational adults acting like this is possible? That your neighbors would slowly shuffle toward you with arms outstretched, eyes glazed over, bent on killing you.

Because it is possible.

I don’t mean the Hollywood movie version of zombies, but I do believe that with the right event or circumstances, most of your town, state or country could be wandering aimlessly looking for food. I personally consider the potential of zombie hordes as all of those who didn’t prepare.

The people who laughed and mocked preppers and who after a disaster threaten your life because they have to have what you have in order to live. It’s just a metaphor for mindless, killers who you will have to watch out for. If you take away the limp and the movie make-up, the people hunting you could be starving and willing to do anything it takes to get into your home and get to your supplies.

So, what do you do in this type of scenario? I think the better question is why aren’t you already preparing for this type of possible outcome?

I think that you have to seriously consider how you are going to act when someone you know comes to you for help or food and you know that with each cup of food you give away, that your children will eat one less meal.

When neighbors are begging you for fuel that you know could power the generator that will keep your mother’s medicine cool and as a result, keep her alive. What will you do when your friends from work come beating on your door because they know you have weapons and ammo stored up and they have none?

None of this is pleasant to think about. In fact it is probably one of the worst part of any hypothetical collapse of society. This would be our zombies coming to life. No, they wouldn’t be trying to eat you, but they would be a threat to your survival and you would have to deal with them. Would you plan for charity? What will you do when the amount you have set aside for charity is gone? What if the person banging on the door is your brother with his entire family?

Zombies aren’t real, but they can be used to get your mind thinking about things like this. Have you thought about what you will do if you are forced to choose?

I also like those movies. Zombie invasion is possible.

Zombie hord to me is not my neighbor wanting a cup of rice, its those who where the authority coming to take it all and willing to kill you because of how righteous hey think they are. Worry less about your brothers family and worry more about people with badges and uniform who will kill you and loose little sleep over it.

I agree with you kiljoy616 that we should worry much less about our neighbors than those in “authority”. That doesn’t mean that they are the only ones you have to consider though…

Just saying if this is a zombie attack, the majority of us are screwed 😛

Good article. One big difference is that Zombies are, as you point out, mindless, where people are sneaky and underhand,, they can plan an attack on you, create diversions, lay traps, etc. so are much more dangerous. The often given advice to have a smaller visible supply of food versus your main hidden stash is applicable here. Yes you lose SOME food that your family could have used, but you don’t lose the BULK of your food. I keep some smaller buckets in my garage, some cans of soup, etc. Whilst it is realistically a few weeks worth of food,… Read more »

That’s a good tip Ian. Never put all your goodies in one spot. Similar to having your cash separated into a couple of pockets. If someone wants your money you can lose some of it instead of all.