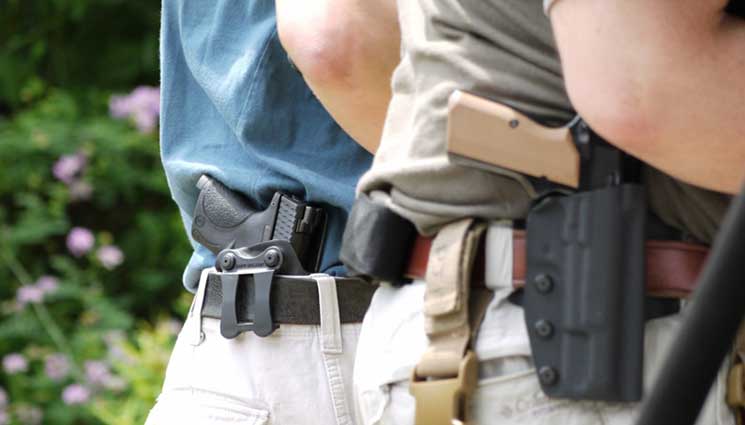 There are hundreds of holster options available.  Inside the waistband, outside the waistband, shoulder, ankle, thigh, level I, II, III retention, leather, kydex, canted, straight-pull…the options are many and quite frankly make my head hurt, just as the many different opinions on what is the best method of carry and which holster you should use to do so. Handgun holster construction factors into all of those choices.

What I intend to do here is address first the holster and then the method of carry. A word of caution: Anyone who has read my writing or taken a course with me knows that I’m not one to avoid Sacred Cows, nor do I like to give credence to the perception a piece a gear may have over the reality of its usefulness.

That said, while it’s not my intention to hurt anyone’s feelings, I may wind up doing so. Thus I’d ask you to keep an open mind about facts versus opinions and at least consider my arguments as you make your decision on what to carry. At the end of the day, it will still come down to informed personal preference.

For all intents and purposes, holsters come in three general materials: leather, Kydex, and nylon (or similar fabric).  There are hybrid holsters comprised of two or more of these materials, but these three are the building blocks from which all holsters spring.

Some materials lend themselves better to specific carry methods than others, just as some materials will offer better concealment than others.  Those of us who have been carrying a handgun for a few years or more all have “that box” tucked away somewhere, the box full of the next best holster that, in all actuality, really wasn’t. I am guiltier than some; I try every new “advancement” in holster technology that comes along so I can be knowledgeable about it when I teach. That doesn’t mean I like it.  Often the improvements are just refinements. Some refinements just reflect the implementation of higher quality of materials or a different production process.  Every now and then someone comes along with a revolution in technology, but this isn’t always necessarily a good thing.

The most important consideration when it comes to the material is its durability and the environment in which the holster is intended be used.  For example, a leather holster is not likely to hold up to harsh environmental conditions as well as one constructed of Kydex because no matter its quality, it’s still made of an organic material, like nylon (a polyamide).

Organic materials decay faster when compared to Kydex (or comparable injection molded plastic). Leather and nylon are also prone to collecting moisture, which will cause them to swell and shrink depending on environmental conditions.  Leather and nylon holsters can perform well in harsh conditions depending on construction, but for almost all purposes Kydex would be the better choice.

This, when considered along with the retention limitations of a strictly leather or nylon holster should dissuade anyone from using leather or nylon for any extended period in austere environments.

For Kydex/polymer plastic holsters, the case for their resistance to the elements is a strong one.  A polymer holster, by virtue of its material offers greater rigidity and general protection than a leather/fabric design; however this advantage usually comes at the expense of concealability and in some cases comfort.  An inside the waistband holster made of Kydex offers little in the way of ‘give’ that a similar leather or nylon IWB provides.

The rigid nature of Kydex prevents it from conforming to the body and because of this, may prove uncomfortable to wear. This will obviously be affected by the location of carry and the quality of the design.  Kydex rigs can offer a great number of active and passive retention options not offered by leather or nylon holsters, because of their rigid nature and the ability to build them with reinforced retention devices. Fabric holsters are available in just about as many configurations as those of leather or Kydex, and some of them are almost decent.  Fabric is a preferred material for “one size fits all” flea market holsters you can find in the deep South, deep East LA, gun shows around the free world around, and virtually any gunshop in between.

These are the bread and butter of certain Third World sewing machines and have been hocked by pikers since the dawn of the modern age.  These holsters offer no rigid weapon support, and many lack even a way to keep them in your pants or on your belt. Of course I have seen a few fabric holsters that were well made, but they still have Kydex or leather cousins that would be a better purchase.

A fabric holster is arguably a reasonable choice for strictly range and sporting purposes, but for concealed carry, I would strongly advise against it. The requirement for greater retention, versus that of simply holding the weapon in place is an issue of need and prudence. For those carrying a weapon exposed, a higher degree of active retention is desirable.  For those carrying concealed, a lower level of retention may be adequate based on the reason for carrying (duty versus personal protection).

So what are the levels of handgun holster retention?

Level I:  Level I retention is often considered a single active security device such as a thumb break or internal lock which requires one step (such as unsnapping the thumb break) to draw the weapon.  Other than the friction of the holster on the weapon, there are no other retention features present.

Level II:  Level II combines level I features with one additional active retention system such as a tension point or internal lock requiring an additional step to clear (such as pushing down on the weapon before drawing or an index finger release button).  Level II is the lowest level for exposed street carry I would recommend.

Because level II introduces an additional active safety measure that must be cleared in order to draw the weapon, it requires more repetitious training, which becomes a safety issue.  I mention safety at this point because one of the most prevalent level II holsters on the market is the Blackhawk Serpa.

Under stress, the finger may depress the button and may remain hooked, with constant pressure against the body of the holster as the weapon is drawn.  With sufficient pressure, the finger may slip into the trigger guard as the weapon clears the holster, creating an opportunity for a negligent discharge.  As one of the four cardinal firearms safety rules directs us to place our finger straight and off the trigger (I teach on the frame of the weapon) until you are ready to fire, this holster breeds potentially bad habits as it positions the finger where it shouldn’t be.

Now, this may be an issue of training (or semantics) that could be explained away if we did not have evidence of more than a few negligent discharges (some of which are floating famously around the Internet video world).

This design flaw became such a large issue that many instructors, agencies, and departments banned the Serpa from use.  I do not recommend the Serpa for this reason alone.  For a level II control device, I prefer a hood and bale system or an internal thumb drive/button as both let the thumb do the work and don’t stack fine motor skill requests in the index finger to confuse under stress. Level III:  Almost exclusively duty holsters, level III combines three active security systems/devices into the holster that must be cleared in order to draw the weapon.   A popular combination is a bale/thumb release and shroud or a thumb break/thumb drive and directional cant.  If you are going to work in close proximity to others in potentially hostile situations, the level III is an excellent choice.  Despite the added level of security, it has been shown that with proper training, the draw from a level III can be just as fast as a level II ( see the Force Science Institute study).

Level IV:  Level IV bears mentioning just because there are still departments and units out there requiring its use.  A level IV is one more step, though as you can probably see, the training curve would get steeper, and it does.  I don’t support the idea of a level IV holster unless that fourth security device is an optional step that can be engaged for hazardous travel (rappelling, SCUBA, etc.) where weapon loss is an issue.

I am of the opinion that the level IV is a solution in search of a problem and only looks reasonable when you are a nervous salad eater and the closest you come to the field is reading about it from a desk.  We already have a level IV; it’s called weapon retention training.

Finally, we get to the method of carry.  There is Outside the Waistband (OWB) and Inside the Waistband (IWB) with numerous variations thereof.  If the choice is up to you, consider your needs first (such as weapon size and your size) and then consider how much of your wardrobe you are willing to adjust for concealment.

If the holster is for duty carry, concealment may not be an issue for you.  As with anything, you are going to get what you pay for.  Holster quality and service life are almost always linked to price.  If you can buy it new with a $20 bill and get change back, chances are it’s not a good holster. OWB holsters include the traditional hip carry, thigh/leg rig, shoulder carry, and chest-mounted.  While there may be other methods of OWB carry, these are the four most common OWB methods we will discuss tomorrow in Part II. We’ll also discuss IWB methods, including appendix carry. I hope you’ll rejoin me then, and remember: real training begins when your comfort zone ends.

Aaron Cowan is the Lead Instructor for Sage Dynamics, a reality-focused firearms and tactics training company that provides practical instruction for the civilian, police and military professional. Aaron served in the US Army as an Infantryman, as a private security contractor overseas and as a police officer. In addition to patrol he worked as a a SWAT team member, SWAT deputy team commander, SWAT sniper, sniper section leader and in-service police training officer. Aaron holds multiple professional certifications including the National Rifle Association Law Enforcement Division’s instructor training program, California POST certified academy instructor, Advanced Law Enforcement Rapid Response Training (ALERRT) Active Shooter Response Instructor and Simunitions Scenario Instructor among others. He welcomes shooters of all backgrounds to his classes as long as they come with an open mind and a will to learn.

Very interesting article as well as very insightful. May I submit my website for consideration. All my leather holsters are sealed 3 times and are extremely moisture resistant. All the edges are hand worked, sealed then sealed 2 more times with the whole holster. There are zero sharp edges on any of my gear and they are built to last for many years in ANY climate. My IWB (King IWB) is guaranteed to be the most comfortable, best looking and longest lasting holster you can get. If you want a truly rugged,attractive piece of gun leather check out my site.… Read more »