If you do find yourself in the wilderness and need food, there are a lot of ways to fill the plate for dinner. Now, I will be the first to say that using primitive traps and the methods below are not the easiest thing in the world. People who rely solely on trapping food routinely have multiple traps, they aren’t the heaviest people in the world generally and often can go without food for a few days if they are unlucky to find nothing in their traps.

Actually, if you plan to Bug Out into the closest national forest with nothing more than your Bug Out Bag, your family and your trusty .22 rifle, I would not count on using these methods below as your sole source of food for a wide variety of reasons. To tell the truth, I wouldn’t recommend Bugging Out for any real reason unless you have zero other options or the risks of staying put are too great.

That being said, the methods below do work and have worked for a very long time. If you have the time, patience and are lucky enough to have an animal wander through your path, the traps below can be used to catch game and it is wise to have knowledge like this in your back pocket just in case.

Small-game snares can be made from the interior strands of parachute cord, braided strands of sinew, or fishing line. Snares stout enough to secure game as large as deer need to be made of rawhide or parachute cord. Of course if you have time to plan ahead, you can purchase snare traps now and put them in your bag. 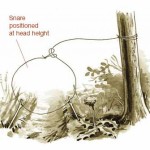 Position the snare at head height and tie off the end to a tree, a stake in the ground, or a log that the animal can only drag a short distance as the noose tightens. Make snares from cord, fishing line, or wire if available. Very thin wire is probably the best for this type of snare I think because when tightened the wire doesn’t easily work itself loose. Paracord internal strands are much smoother and can slide off more easily.

A good place to position this snare (and a lot of them actually) is on a game trail. You have probably walked over hundreds of them if you have spent any time at all in the woods. The trick is to watch the ground floor and you can see trails. Set this snare up in a curve on the trail and cover the snare as much as possible with leaves to camouflage it. 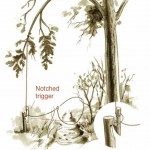 2. Spring Snare
This snare functions by setting a trigger that snatches game into the air as it strains against the noose. It’s good for rabbits and game as large as deer. There are two main gotchas to remember with this trap. The first is that you want to choose a tree that will be both springy enough that it will spring back quickly enough to set the snare. This may be hard to do because the location of the snare will need to depend on what tree branches or trees are near.
The second thing to consider is if the branch is strong enough to hold whatever you are hunting for. Lets just say you are trying to catch a deer. You better choose a pretty beefy branch and make sure that your cordage will hold the full weight of an animal who will be trying very hard to get away if the impact from the branch swinging up hasn’t taken care of them pretty quickly. Also ensure that your rope is tied to the branch in such a way that it can’t easily be stripped off. If you don’t hoist the animal off their feet, they can pull against the cord. If the cord isn’t tight and wrapped around something that won’t allow it to slide off, you may have just given a bunny a new necktie. This will probably kill them later but you might not be there to enjoy the benefits and you might be out of your only snare materials.

Deadfalls that use logs or rocks to squash prey are typically baited, but they also work along trails or outside burrows when a passing animal or bird brushes against the trigger. 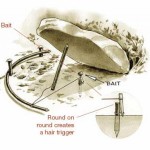 3. Spring Deadfall
One of the easiest traps to make and set, the spring deadfall depends upon the game going after the bait, so it’s best used for carnivorous animals and rodents such as pack rats. The only materials you need for this trap are a big heavy rock or a big log. Something big enough to crush the skull of the animal you are trying to trap. This has to be big enough to kill them pretty quickly.
If you have some bait, that will attract animals more quickly. You can set this up on an animal path, but waiting for someone to wander along might take a long time so bait is ideal. If you return and find the trap has been tripped, be careful removing the object that you used. It is possible the rock is just holding down the animal who could scurry off quickly after you raise the weight.

Employing fire-hardened spear points under tension, these can be deadly to predator and prey alike. Always set and approach an impaling trap cautiously from behind and use only in an emergency in remote areas, where another human or domestic animals are not going to blunder past. 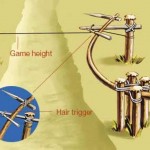 4. Spring Spear Trap
This trip-wire set is effective for wild pigs, deer, or other game that regularly sticks to defined game trails. Make certain the horizontal thrust of the spear is at a level that will impale the body of the game sought. This is an extremely dangerous trap; use it with caution.
The last thing you need to do if you are in the woods and are depending on spearing an animal for dinner is to jab a spear into your upper thigh or worse (gulp). Again, the choice of wood here is going to be important because the trap has to impale the animal with enough force to kill it while not letting it escape. If the trap is sprung you want the animal to still be there when you return.

Birds can be much easier to trap than mammals and should be among your first targets for a meal. 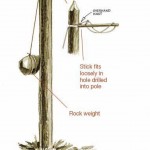 5. Ojibwa Bird Pole
Set this trap in a large clearing where birds will naturally seek it out as a landing place.

Fish swim next to banks at night or move from deep holes into shallow water to feed. They can often be directed into traps from which they are unlikely to escape. 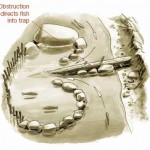 6. Funnel Trap
Make the walls of the funnel trap with piled-up stones or tightly spaced sticks driven solidly into the river or lakebed. Close the entrance to the trap, roil the water, then either spear the fish or net them with a seine made by tying a shirt or other cloth between two stout poles.

This is one of the easiest traps to be successful with I think. I haven’t ever used it, but the logic seems to give you a much better chance of success provided you are near a water source and there are fish in there obviously. This is also one method used in the book “The Hatchet” which my kids really like. I think I liked it more than them, but regardless if fish are near, this is far easier than fishing. Seed the trap with whatever you can find for bait and the fish should file in for you. This is also great because if you are in the woods for a long time, a trap like this can keep bringing you fish and keep them alive until you are ready to eat them.

I’ve read so much about these I really want to grab my go bag and try some of these traps out. It’s better to see how good you are at it while there is still a Burger King to be had.

Thanks Hamburglar! Always wanted to say that…

Yeah, this is a good idea for a day or weekend trip into the woods. A day might not be enough time to see the results and I wouldn’t leave the trap set and go home, but practicing now before you need to use the skills is always better in my opinion.

Say Hi to Ronald for me. 🙂
Pat

When I attended USAF Survival School we were taught to put out at least 10 traps to expect one result. They must be checked from afar twice daily to keep from losing your game to a fox or other predator that may be attracted to the scene. Wear eye protection when setting spring snares or ensure you are out of the way of the trigger and other parts in motion. Practice in your back yard before going out to be hungry. Good luck.

I’ve never seen the Spring Deadfall before, pretty neat. You’re right on the practice though, It took me about 2 yrs. of trying off and on to start a Bow drill fire, now I get it pretty much every try. But Dirt Time is important on any skill, you can even practice in your home

I have that on my bucket list. In the meantime I still have plenty of Bic lighters and the fire steel for backup. I figure I’ll save the bow drill for when I can’t walk for a few weeks or something… 🙂

One thing my dad always taught me was to suspend some rotting meat above a fish trap. What happens is eventually maggots appear and fall off into the water attracting fish constantly.

Very good advice from your dad. Fish trapping is the easiest way to secure protein for long term survival. It works while you do other things.

Great article and handy information. If you visit this link you can get access to a book with literally 100’s of pages of different primitive trap designs. Some are very interesting. Thanks!
https://softtracks.org/2017/10/17/book-primitive-trapping/

Can I just say what a relief to find somebody who actually is aware of what they’re speaking about on the internet? You undoubtedly know tips on how to carry a problem to light and make it important. More people need to read this and perceive this facet of the story. I can’t imagine you’re no more popular since you positively have the gift.

this section very important ” Position the snare at head height and tie off the end to a tree, a stake in the ground, or a log that the animal can only drag a short distance as the noose tightens. ”

I might go camping this year. Do you think that these will work in the cold weather?

This article has some good advice which makes me want to utilize and write about my experiences using these traps, thanks a lot

Thanks for sharing such an useful tips for wanderer like me. Catching some foods help me a lot to survive while exploring the nature.