No, this isn’t a trick question and I do think there are very big differences between someone who calls themselves a survivalist and someone who prefers to use the term Prepper. Regardless of what I think though these two terms are interchangeably used to describe a wide swath of people. These people all have different motivations and philosophies on what they are doing and why. Survivalists and Preppers are just labels. Labels like this though can pigeon-hole people into thinking they need to act a certain way or it can cause assumptions from others based upon their own perceptions of what these words mean.

How are Survivalists and Preppers alike?

Let’s start with the easy stuff first. What do people who call themselves Survivalists have in common with a Prepper? I think at their core, Survivalists and Preppers both have a deep desire to live. This is not a fear of dying but rather a strong yearning to live life on their own terms. You will find tenacity in both Preppers and Survivalists to try to see the options they have before them. If you give up easily or become defeated too quickly you probably don’t deserve to call yourself a member of either team just yet.

Both Survivalists and Preppers like to prepare for unforeseen events, but I do believe Survivalists have a slightly more cavalier attitude about their chances for survival. Survivalists may give more weight to learning how to forage in the woods and eat grubs while their Prepper cousins might be more comfortable storing food to last as long as possible or creating a garden with heirloom seeds. The grub worms and fiddle-head fern salads can wait as long as possible, thank you. 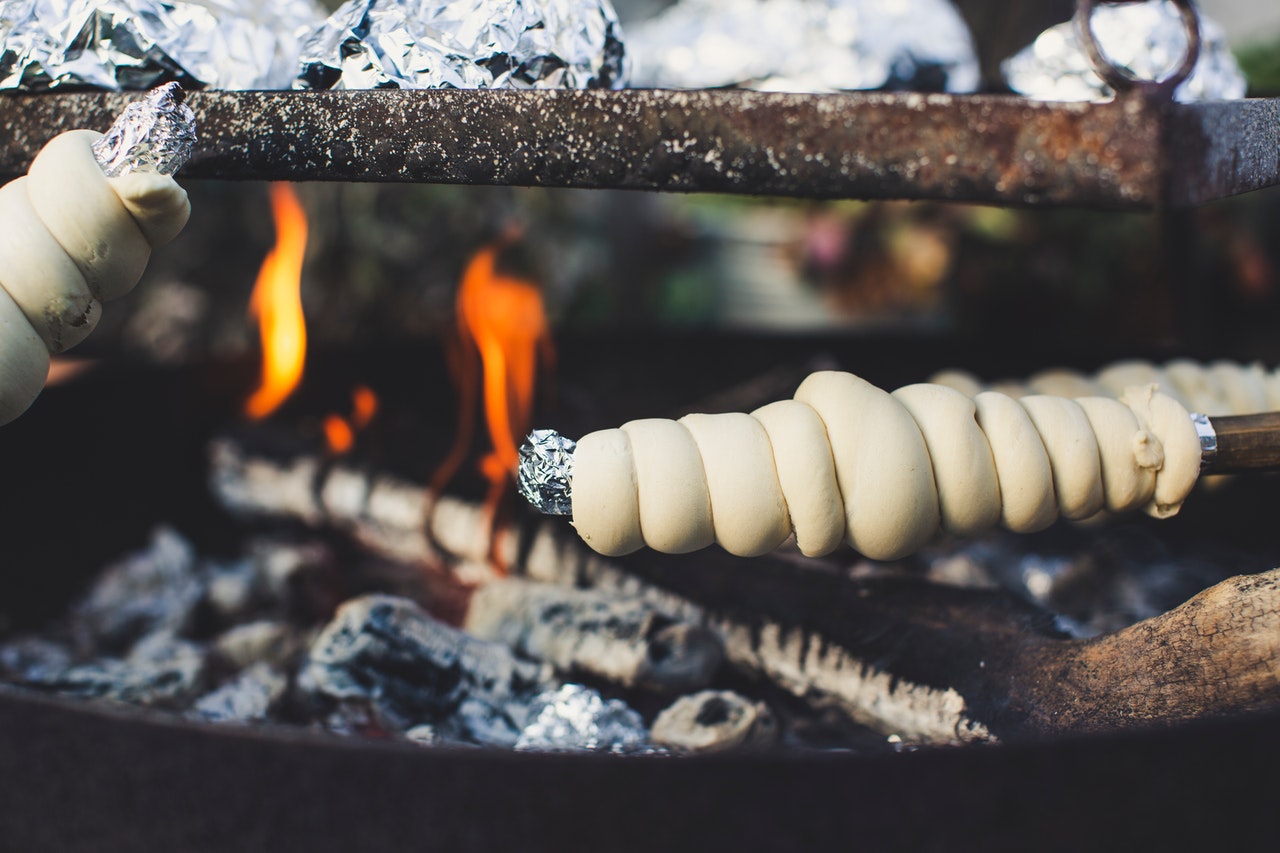 Survivalists and Preppers are both going to need to provide food for themselves.

Along with the desire to live I think Preppers and Survivalists both have a positive mental attitude towards overcoming obstacles when it comes to survival. They both hold a belief that with the right training, mental outlook, and circumstances, no situation is ever more than they can bear. I have spoken to a lot of people who seem to want to shut down in the face of adversity or impending doom. Their response to my questions about prepping are usually something like “well we are all gonna die anyway, so what’s the point?” and this is 180 degrees from how I think we as humans should be.

What if the early settlers of our country just said, “I quit.”? They faced starvation, disease, death on a daily basis and still managed to carve a country out of the wilderness with zero government assistance, WIC vouchers, National Healthcare, MRE’s, GPS, Bug Out vehicles, or smartphones. Do you think they had a desire to live and a positive mental attitude? We come from those same people who braved the elements, sailed across seas for months, and landed in a foreign land with not much more than the clothes on their backs. They were the original Survivalists and Preppers and their blood runs through our veins.

How are they different?

As I said above, I think these terms get used interchangeably all of the time and in a certain context, the meaning may be blurred. For instance, there are a lot of websites that have Survival in the name that I look up to and respect greatly. They offer a ton of useful information on Survival, and I have linked to several of them on our resources page. I am not referring to the word Survival here because I think we all want to survive something.

When I speak of “Survivalists” with a capital S I am referring to people who will label themselves as such. I think Survivalists lean more toward the ideal that Bear Grylls and Les Stroud have promoted with their respective TV shows showing how they both can survive in the wilderness on all manner of strange tricks and skills that the normal person would never be in a place to use. I think some Survivalists see themselves as being deserted in a jungle somewhere with only a rusty coke can and a bandana to survive. Now, if this happens to you, would all of those Bear Grylls skills come in handy? Absolutely, but to base your entire understanding of the possibilities of what this life can throw at you on a couple of reality shows seems to miss the point to me.

To quote our current President, “Now, let me be clear” I love watching Bear Grylls and Les Stroud and other shows I can’t remember. Those shows do pass along the knowledge that you can use and this applies just as much to the suburban prepper as it does to the Survivalist. I just prefer to take that knowledge and try to apply it to a different potential reality.

Preppers on the other hand do not seem to have most of the same scenarios in mind when they are preparing for an uncertain future. Preppers typically have one or more situations they view as inevitable and they make plans to mitigate the bad effects you could be faced within that situation. For example, if a Prepper lived in Tornado alley, they would rightfully be concerned and their preps would almost certainly start with safety should a Tornado strike. They could go one past that and plan for survival after the tornado with food, water, and shelter options that could help them and their neighbors in the days and weeks after any type of natural disaster like that.

Preppers also do not seem to make plans with only themselves involved. Preppers like to form groups and communities and try to get others involved, engaged, and on-board when it is prudent to do so. I know there are survivalist groups as well, but they still seem to be more likely to want to be away from people before there is any actual need to.

Survivalists that I have run across definitely have a different way they present themselves when the subject of hypothetical grid-down scenarios are presented. I do get the sense that in some cases, they seem to have a “let them go to hell” mentality and I don’t think that is what Preppers would agree with on the surface. Now, I will freely admit that I haven’t met everyone, don’t know what is in anyone’s heart but mine and I could be very guilt of gross stereotyping here. If that is the case I apologize and I would love to hear your side in the comments below. I am not trying to pick a fight, just comparing and contrasting some people/themes based upon my observations.

Lastly, Preppers seem to be looking for a lifestyle change on top of their preparations. Eating more Organic food, living healthier lives, becoming more self-sufficient are common themes and this transcends any natural disaster. It shows a desire to have a better life and that is something I think we could all use.

Which one is best?

I don’t think it is as black and white as I have made it out to be in the paragraphs above. I certainly think that if the SHTF we would all be in for a huge reality check and there is no telling how we each might act. Who knows what type of situations we may be faced with and what will be necessary in order to live and keep our families safe. We might all end up being in the same boat, bashing each other over the head with the last broken oar. I hope not.

I like to identify with Preppers, but I do know that if faced with certain triggers, I might fall squarely into the Survivalist camp that I was painting with a broad brush a little earlier. I guess we are just two sides of the same coin, but we are both made of the same mettle. I don’t think there is anything wrong with that at all.

Methinks I’m somewhere in the middle, like 70% prepper and 30% survivalist. I have made it one of my life goals to make prepping/survivalism my everyday lifestyle, not just a stockpile list of goods and skills waiting for the crap to hit the fan. I take the threat of natural and man made disaster seriously and act accordingly. I figure that if the SHTF, I’ll have a lesser impact from culture shock than most others would. Besides, living off-grid and against the grain is way more fun than the popular modern lifestyle. Who needs all those fancy i-gadgets when I… Read more »

Thanks for your comments Free Soul and good luck on finding that boyfriend!

ha look harder we are out here

I think you will find there are plenty of preppers who shy away from the community aspect, as well. It’s just rare people find out they are, even their own family members at times. Many around here feel it would be painting a huge target on their backs to join a group, online or real world. It’s like waving a banner that reads: I have stuff you don’t! Come take it from me!

I agree shoe and that’s a shame. I don’t belong to what I would call a community either but am trying to build that out through family right now.

I’m probably about 80% survivalist and 20% prepper/homesteader. I don’t like to rely on anything, even stuff I’ve stored up. My biggest role model is probably Tom Brown, then Dave Canterbury and Matt Graham.

I think your quite wrong on a number of points. 1) that people will be so inclined to be neighborly and hlp out each other out. Wrong, people are especially when confronted with such dire circumstances are panicky, scared, and tend to be rather desperate. The other point is that survivalists are the tactically minded nightmares that care only about themselves. That isn’t true either, but I have met the brand the tacical nightmare that think the world is ALL out to get them. So labels are definitely wrong and it needs to start with writers denouncing the use of… Read more »