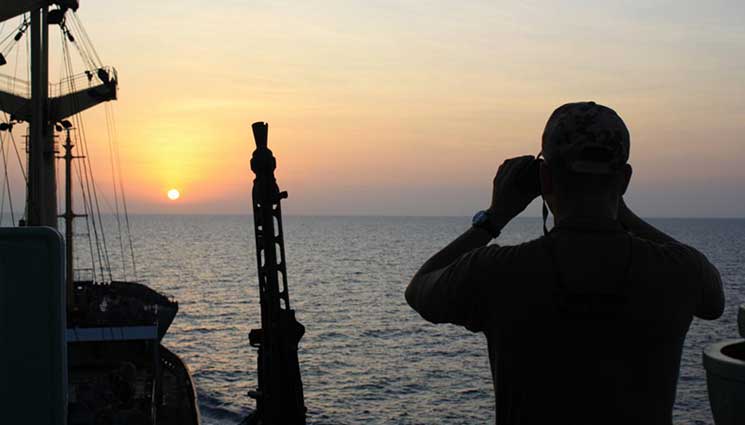 Many of you reading this now have at least a vague concept of Situational Awareness. For those who don’t, Situational Awareness means slightly different things based upon who you ask, but the general concepts are the same. Situational Awareness is an understanding of your environment and any potential threats to your safety or the safety of others in your group. Even more simply put, it’s making sure you know what is going on around you at all times.

I think even more simplistic, SA is just an escalating awareness of what is going on around you. With that increased awareness comes an additional capacity or choice of how to react appropriately to the situation. How you react or what is necessarily needed isn’t always violent but the benefits of being fully in the moment can help you survive in several different ways.

One permutation of Situational Awareness is from Jeff Cooper. Mr. Copper is known as the father of modern handgun techniques. Mr. Cooper developed 4 levels of situational awareness commonly known as the Cooper Color Code.

He developed this color code as a way of defining how someone would go from zero to ready and willing to shoot someone and the processes involved in that progression. Sometimes, it gets lumped into a general awareness we preppers call “Situational Awareness” and some would argue, misused but it’s instructive regardless.

Condition White or threat level white is the lowest we have in terms of urgency. Condition White means everything is OK and you don’t have anything to worry about. It is often used to describe people who seem oblivious to what is going on around them locally. Like when they are being followed down a dark street by a group of shady characters.

When someone is looking at things from a Condition White standpoint, they think nothing is wrong and there is no cause for alarm. Move along folks, nothing to see here. This is also the level most people are in for vegging around the house watching a movie.

Condition Yellow is a more proactive approach to the possibility of danger. This doesn’t necessarily mean anything bad will happen, but situational awareness is elevated and a more defensive posture has to be assumed in order to be ready for any potential threat.

You can stay in a Condition Yellow for a long time without becoming fatigued. This is easily translated to being very attentive while driving for example. You are alert, but not freaked out and can readily anticipate the actions of the other drivers ahead of you.

In condition orange, your radar is up and you are prepared for something to happen. If you have ever been in a situation and watched two people right before a fight you know what this is. You are aware that you may have to take action at any moment.

Condition Red means an attack is imminent. You have either knowledge of or can visually see a threat approaching and must prepare to act. This is when the trigger gets pulled in a situation where deadly force is required.

How can preppers use situational awareness?

How do we begin to put these concepts into action in our lives? All of us are constantly engaged in various levels of situational awareness most of our waking day. From the moment you wake up, to the time you finally drift off to sleep you are paying various degrees of attention to what is going on in your surroundings.

This concept applies primarily to your immediate vicinity, but could also be expanded to your city, region, state, country, and now with the threat of Korea, the world. For most of this article, I am going to focus on your immediate environment because I see the greatest capacity for harm to you and your group by losing sight of what is going to impact you with the most urgency.

For your immediate Situational Awareness we have to start with you and what you are paying attention to. How distracted are you at any given moment? There are funny examples and more deadly examples of how something bad could have been averted if people were simply paying attention.

We lead very distracted lives now. If you don’t believe me, you are either in total denial or are living very far away from the rest of us. We have 24 hour news, movies that we can download and stream to our phones, smartphones with applications that require constant attention and a never-ceasing craving for information or stimuli for various reasons and rationale.

Everyone has to update their Twitter or Facebook status, share photos with their friends, and play games. This leads to people commenting on the most mundane minutia in life just to have something to say and focusing more on their phones than the world around them. If you have children of a certain age, they are probably involved in at least two weekly extracurricular activities which they need to be driven to and require practice usually with a DVD to keep them pacified.  Advertisements bombard us in every conceivable place vying for our attention.

The social norm is to “be connected” but there seems to be in my mind, less actual connection with anyone. Just go out to any place and watch a group of kids interacting for any amount of time and I would bet $50 that there won’t be a 5-minute time span when one or more of them isn’t staring at their phone. This doesn’t only apply to kids; adults now are just as bad. I go out to dinner with people I work with or friends and the phones all come out.

More and more people I see are listening to music also with big headphones everywhere. They can be in an airport, walking down the street or even in their car. I love music as much as the next person, but how aware of what is going on around you can you be if you are thumping music really loud into your headphones? How can you see any threats coming if you are staring at your phone?

Situational Awareness could save your life and doesn’t cost a single penny. You don’t need extensive military training to become an expert. All you need to do to is drop whatever it is you are looking at and start paying attention. I have a smartphone, so I am not perfect at this, but there are times and places where my phone doesn’t leave my pocket. Why? Because I need to be focusing on what is going on around me.

When you are out in public, try going for an hour without looking at your phone to start with. Instead, observe your surroundings. Who is near you and who is walking toward you? Does anything seem suspicious? If something were to happen, what would you do and where would you go.

Do you know the quickest way to get out if needed? Can you access your concealed weapon if you need to? Imagine what you would do if you were out at a mall with your family and someone started shooting. Where would you take cover? What would be your escape route? What if that was blocked?

Finding the right level of awareness for the situation is critical though as we can’t stay on high alert at all times. For most situations, I would recommend yellow or caution but that can be dialed up or down as required. An article at Strafor has a good explanation of this reasoning.

It is critical to stress here that situational awareness does not mean being paranoid or obsessively concerned about your security. It does not mean living with the irrational expectation that there is a dangerous criminal lurking behind every bush. In fact, people simply cannot operate in a state of focused awareness for extended periods, and high alert can be maintained only for very brief periods before exhaustion sets in.

The “flight or fight” response can be very helpful if it can be controlled. When it gets out of control, however, a constant stream of adrenaline and stress is simply not healthy for the body or the mind. When people are constantly paranoid, they become mentally and physically burned out. Not only is this dangerous to physical and mental health, but security also suffers because it is very hard to be aware of your surroundings when you are a complete basket case.

Therefore, operating constantly in a state of high alert is not the answer, nor is operating for prolonged periods in a state of focused alert, which can also be overly demanding and completely enervating. This is the process that results in alert fatigue. The human body was simply not designed to operate under constant stress. People (even highly skilled operators) require time to rest and recover.

Because of this, the basic level of situational awareness that should be practiced most of the time is relaxed awareness, a state of mind that can be maintained indefinitely without all the stress and fatigue associated with focused awareness or high alert. Relaxed awareness is not tiring, and it allows you to enjoy life while rewarding you with an effective level of personal security. When you are in an area where there is potential danger (which, by definition, is almost anywhere), you should go through most of your day in a state of relaxed awareness. Then if you spot something out of the ordinary that could be a potential threat, you can “dial yourself up” to a state of focused awareness and take a careful look at that potential threat (and also look for others in the area).

Even if we are never in a grid-down, zombie apocalypse, the world we live in demands us to remain focused and diligent if we are going to be truly prepared. You won’t be able to protect all of these people you have been planning for years for if you are hit by a bus crossing the street. The same is true if you are involved in some terrorist attack or lunatic at a school. Maintaining situational awareness can save your life and the lives of others around you and we owe it to everyone to try to do what we can to foresee danger first and deal with it second.

Great post. I’ve been practicing “condition yellow”, with short bursts of “condition orange” for over 20 years now. It’s an essential part of my job as a professional semi-truck driver. Every day, even in as desolate and wide open a place as the southwestern desert or the high plains area of the Dakota’s, relaxed awareness of your surroundings and environment (weather, road conditions, etc.) is the default. When I’m driving in busy, crowded urban areas or during heavy weather, my awareness level is ramped up considerably, as I not only have to adapt to the immediate threats of weather and… Read more »

I can only imagine what it is like to drive a huge truck like that especially through narrow streets with traffic whizzing all around you. I can see how anyone in your line of work would be VERY aware of what is going on just for the simple desire not to take out a whole line of cars.

Hi to every one, the contents existing at this website are truly awesome for people knowledge, well, eep
up the good work fellows.