When Society Disintegrates: A preview Of What May Be Coming To Your City 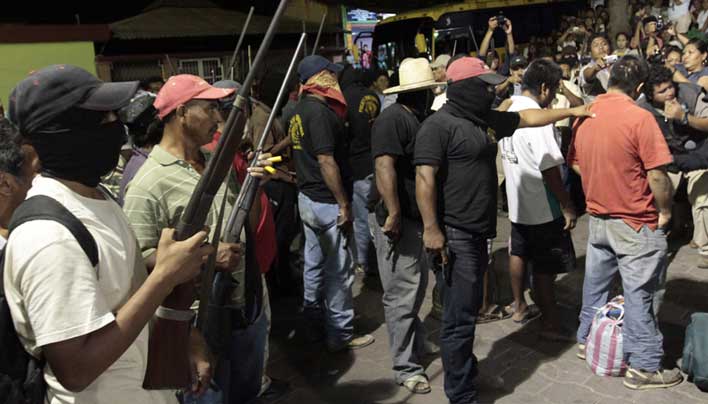 Yesterday I read about hundreds of armed vigilantes in a small Mexico town . This was preceded earlier by reports of townspeople capturing and murdering several men, displaying their bodies propped up in lawn chairs for the world to see. Their captors had written signs on some of the dead men as a warning to those who came to loot and kill. On the surface, with so much violence associated with the drug wars in Mexico, this seemed like a positive development purely from the aspect of people taking justice back into their own hands. Their corrupt officials not caring to protect them anymore were ignored and the town was saying “we aren’t going to take it anymore”.

Now, however things appear to be evolving and so are my thoughts on this subject. The “Vigilantes” are setting up road blocks, arresting police officers, conducting searches of homes for weapons and increasing their presence everywhere. I fear that the vigilantes could wind up being just as dangerous to the citizens of that town as the gangs and corrupt police. I also wonder if that type of scenario isn’t what we have in store for us here.

An article in the Global Post states the simple motivation for the vigilantes:

“The federal and state governments haven’t been able to do anything,” said Evert Castro, an Ayutla municipal councilman. “And we don’t have the capacity to fight these criminals. So the people got tired and decided to act on their own. We see this as a good thing.”

We are supposed to be a society of laws. For this to work people have to obey the laws and those who don’t are supposed to be dealt with fairly and in a just manner. When this happens, you have an equilibrium that is maintained and for the most part people live together in a civilized manner.

When you take the laws, justice and fairness away as we have seen for years in Mexico and one could argue that this is happening here to a different level as well, society becomes unbalanced. Injustice rules and people can be taken advantage of.

What if the rule of law no longer applied to your community? This is something we discuss in prepper circles daily, but usually in theory. Hypothetical scenarios that we use to either bolster our argument or use as rationale to make decisions. WROL (Without Rule of Law) is nothing that any of us should want to live through. I know that some may say (as I initially did) “Great! These people will clean up their own streets.” Really?

What is the difference between police searching through your house without cause or warrant and a gang of vigilantes? What makes getting stopped on the side of the road by a gang of armed vigilantes and having your car searched any better than going through some random checkpoint setup by the government? Are they really better off now in Mexico?

In January, hundreds of armed vigilantes made a series of arrests and imposed curfews in Ayutla de los Libres and Teconoap. They also manned checkpoints and claimed they had arrested at least 30 suspected criminals. One of the masked vigilantes said: ‘They kill, extort, rape. You do know if they are drugs dealers, thugs, who want to grab everything. ‘We want to return peace and tranquility to the entire population. Only the people can restore order.

If society devolves to the point where “only the people can restore order” do you trust that all of the other “people” will be fairer, less prone to corruption than anyone else? I am not for one second stating that only government or the police can protect you. What I am saying is that the people who are entrusted by our society to ensure justice must be just themselves. If the gang of people who are trying to protect your town are no better than the ones they ran off, killed or arrested, where does that put you? What can you do now to put yourself on a level footing in your neighborhood or community?

This is a simple one. Knowing your neighbors and how they will react, what their thoughts and philosophies are will help you deal with them if a situation arises where some form of resistance or vigilantism is planned. You want the people around you to know you, be able to vouch for your character and hopefully protect you from any lawlessness that is caused. If you are part of the team responsible for “restoring order” you will have a supreme advantage if you know the people you are working with and supposedly protecting. It should also go without saying that you have a supreme responsibility also to your fellow man.

As much as possible, you want to be prudent in what you say, how you say it and to whom you say it to. OPSEC is keeping essential information about you or your family as quiet as possible. You don’t want to brag about supplies, preps you have or someone could easily say: “Hey, Joe has a whole bunch of ammo. We could take it from him.” This is just one example, but could carry over into a lot of other aspects of survival.

Ensure you have the right stuff

When and if chaos ensues, the last thing you want is to be without the essentials. You need a decent store of food. You need water and I would recommend a means of defending yourself. I am not trying to be an alarmist, but I do believe the writing is on the wall for our society and I am preparing. You should evaluate your life, your situation and make sure you have plans to take care of your family if it all goes sideways. Make sure you have this taken care of now and you are not trying to make it to the sporting goods store after the riots have started.

Prepare to Get Out of Dodge if necessary

It may be wise for you to leave. If we are back to a wild west, Mad Max type of world, you may want to get out of town. Prepare yourself now by clearly thinking and analyzing your decision to bug out or bug in. Knowing what you want to do, preparing for that eventuality is a start, but situations are dynamic. Think through your options well in advance of needing to employ them. If you have to get out of dodge, make sure you have a plan, a great vehicle and options. If you intend to hunker down, make sure you know your neighborhood or town. Intelligence like this could help you make decisions on the fly.

Never let your principles be compromised

I was going to say “Above all else” before never let your morals be compromised. It is easy to say what you would “never” do when you are sitting in front of a computer. I can easily say I would never do anything bad to another unless my life or my family’s lives depended on it, but that isn’t completely honest. We are all human and are subject to weakness for a million reasons. What I try to do is live like I should and act as God leads me. I know I will make mistakes, but I try to think about situations I may be faced with. Imagining how you will act is no substitute for the real moment, but it does give your brain some practice thinking through the ramifications of your actions. Even developing a personal threat escalation plan, while just an exercise, can be beneficial. State out loud what you will or will not abide as your conscience leads you. Try to maintain that moral compass as straight as possible. You may fall, but having a direction in the first place will point you back to the right path much quicker.

I fear for our civilization but I will not sit idly by and watch it crumble and consume us. I will make plans, prepare my family as best as I can and try to be a force for good. Besides praying, I don’t think any of us can do much more than that.