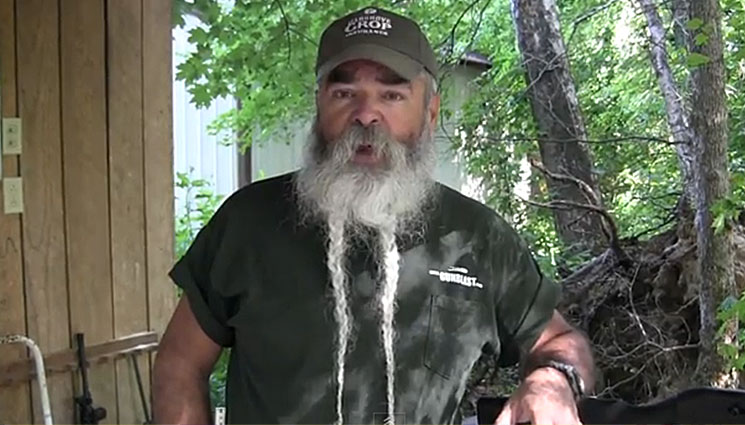 Yesterday, we had a post describing the best home defensive weapon to purchase especially if you don’t have any options or have limited funds. For those who didn’t read that you should. If you don’t want to read it I’ll just tell you it is a shotgun. There, I ruined it for everyone.

I came across this video today of Jeff Quinn who has a website and a YouTube Channel called GunBlast.com. He has a lot of videos about weapons and shooting, but the one that caught my attention was this video about shotgun stopping power.

Jeff demonstrates in his video that Bird shot is every bit as effective as a home defense round without the downside of penetration into other rooms. One fear of using buck shot is that the pellets will keep going into other rooms and injure others. Bird shot seems to do roughly the same amount of damage without the collateral damage.

Jeff describes himself as a “full-grown child who lives in the woods next to a national wildlife refuge in Tennessee” and I love listening to him gently knock the people who have come to him in the past with complaints about bird shot.

The video is interesting and I will be going back to his channel for more. Check out Jeff Quinn yourself below and let me know in the comments if he made you a believer like he has me.

Good demonstration. I live in a small house in the suburbs. I have worried about the possibility that an errant bullet might travel across the street or nextdoor and hurt someone unintentionally.

I’m a believer in the birdshot now.

I have also considered a graduated load where the first shell in the chamber is bird shot, then followed by .00 buck. This way the bad guy might get a chance. If the first shot doesn’t finish him off and he keeps on coming, the second definitely will.

I like that idea. I’ve seen revolvers that shoot .410 shells as well as bullets. Wonder if the same principle might work there?

It may, but I prefer the utility of the shotgun. If you already have a revolver that shoots .410 that is one thing, but I am not sure I would buy one just for this case. With the shotgun you can do so much more I think.

Regardless, it is something interesting that you should look into and see if that is a better alternative for you. Let me know what you find out!

Actually, I have a 12 gauge so it’s moot – just thinking aloud. Also, I like the sound of pumping a shell into the chamber for getting an intruder’s attention and possibly inducing a bladder evacuation :^)

Good video Jeff, thanks. One thing some folks seem to forget is that there are many sizes of ‘birdshot’. 2s are considerably larger than 8s and will penetrate further. I use a 1 1/2 oz. #2 load followed buy a load of #4 buckshot. I think it would do the trick.