We Promise: No Armed Drones In U.S. 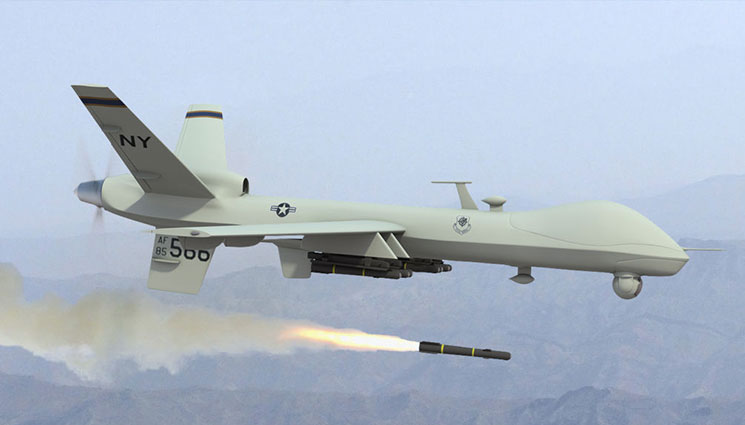 Subtitled: If you believe that I have a bridge to sell you.

As drone use has became more prevalent with the onset of the wars in Iraq and Afghanistan they have been increasingly used in the US. Police stations and Universities all want their hands on one and for what reason? We don’t know at this time, but the privacy implications alone are troublesome. Not to mention the fear that just like in Pakistan, drones could be used to track down and kill Americans. It seems to be an eerie prelude to a “Terminator” like scenario where we are hunted down and killed by machines. The question of when these drones could possibly be armed and killing civilians in the US has always lingered around the periphery and so far assurances from government all sound the same.

Yesterday in the Washington Times a top official with the FAA sought to calm the Luddites and dispel any notion that they (the government), had plans for anything in the US like what they are currently doing in the Middle East now.

We currently have rules in the books that deal with releasing anything from an aircraft, period. Those rules are in place and that would prohibit weapons from being installed on a civil aircraft,” said Jim Williams, head of the FAA’s Unmanned Aircraft Systems Integration Office, in an address to the drone industry’s leading trade group meeting this week in Northern Virginia.

“We don’t have any plans of changing [those rules]for unmanned aircraft,” Mr. Williams added.

But when pressed on whether drones could, for example, be armed with weapons when patrolling the U.S.-Mexico border, Mr. Williams deferred.

“Border patrol is the responsibility of [the U.S. Customs and Border Protection agency]. I’ll let them answer that question,” he said.

It is very nice of Mr. Williams to try and make us all feel better, but even the Attorney General has acknowledged that in his mind “the president has broad legal powers to kill US citizens suspected of links with al-Qaeda who present an “imminent” threat to the country”.

That’s al-Qaeda. What about the recent drone use with Christopher Dorner? I am not saying they killed him with a drone, but they weren’t afraid to use it publicly to find him. What’s next? Drones have already been used in the US for monitoring and tracking. Steve Watson from Infowars reported in December:

In addition, a recently uncovered Air Force document also raised alarms over military use of spy drones in US skies. The document outlines how to circumvent privacy laws, and clears the way for the Pentagon to use drones to monitor the activities of Americans.

EFF notes that the latest FAA documents indicate that the Marine Corps is also flying drones in US skies, but that “it chose to redact so much of the text from its records that we still don’t know much about its programs.”

Perhaps most disturbingly, DARPA, according to the documents, is flying full sized Reaper drones in areas of Nevada, California and Utah that are able to use technology that can capture motion imagery of entire cities. The technology, known as “Gorgon Stare” uses an array of nine to twelve cameras attached to the drone to take concurrent footage from multiple different angles.

We are not far away from drones freely flying overhead watching everything we do all in the name of the “Greater Good”. Right now they are trotting out low-level minions to assure us that nothing is wrong and we should all go back inside. Nothing to see here…These aren’t the drones you are looking for.