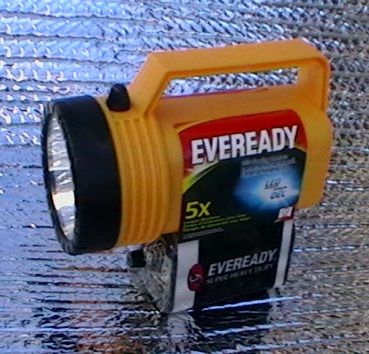 Who doesn’t want to get the most from all of their preps? One of the most frequently exhaustible resources is batteries and almost everything you could use in a grid-down situation uses batteries (obviously not talking about solar power here) and when you run out of batteries you are in trouble. Of course you could drive to the store, but then that wouldn’t be a grid-down scenario would it?

Flashlights come in all shapes and sizes and they have an unlimited number of applications but the general purpose is delivering light. Duh! So we want them to keep delivering light as often and as long as possible right? A person who goes by the screen name of luxstar over at indestructibles.com has demonstrated a fairly simple modification that allows an already long lasting flashlight to gain 3.6 times the run-time. In his example he is using an Eveready flashlight (model number 5109LSH7 or 5109LS) that costs $4.97 at Lowes and has a standard run-time of 65 hours. With his simple modification he was able to squeeze almost 360 hours out of the same battery! That is 15 days folks!